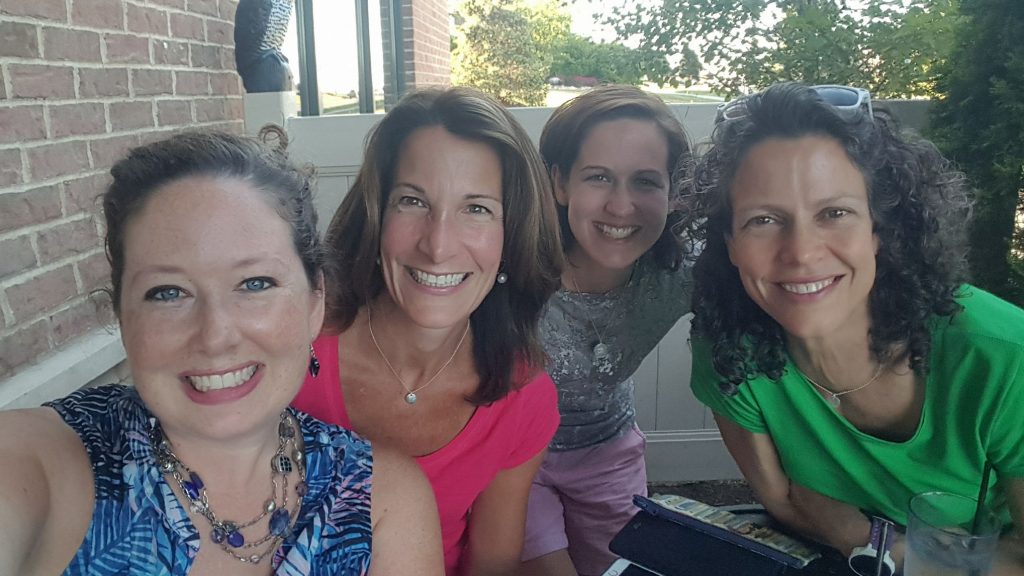 Way back in July, I ran the Boilermaker 15k but I never got around to writing a race report. Now it’s time. I signed up for the race in March in a fit of work stress. Glitter Mom had planned to run it before she got hurt. It’s an iconic race. I have a lot of friends in nearby Albany and I convinced North Shore Strider to join me. Those are all good reasons to run a race and yet, about five minutes after we registered, we both promptly forgot about it. In fact, when Coach Mick initially wrote my July training plan, he left the race off because neither of us had been paying attention. I could barely remember how long the race was! (15K, it turns out, which is 9.3 miles). After some consideration, Coach Mick and I decided to treat it as a chance to practice marathon goal pace, both for running and fueling, rather than having me race it. Fine with me. I had lots of chances to meet with the race demons this past spring and I was not feeling the need to chat with them again.

North Shore Strider and I met at my in-laws to consolidate down to one car so we could travel together. Thanks to the Incredible Mervus’s parents, we left a car in western Massachusetts and proceeded to Albany together. We were staying with our super fast friend, Nicky. Once we settled in and went for a walk, we realized Tiny Dynamo could join us for dinner. Score! So much fun! After dinner, we grabbed some groceries for the following day and scooted back to Nicky’s place and into bed. Morning was coming early with a 4:15am departure time! 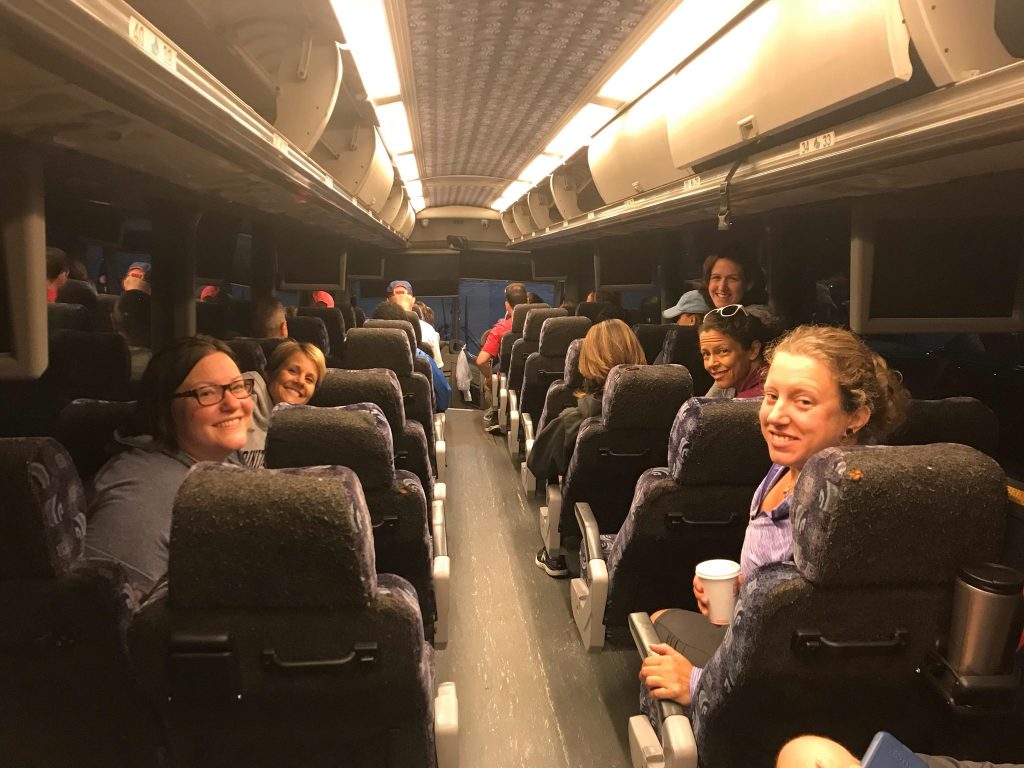 Breakfast on the bus with a lot of Albany Running Mamas!

Because I like to keep track of logistics and fueling and such, here is what I did for this race. It was a little complicated because of the long bus ride before the start. On the bus, I had instant oatmeal with water from a thermos Nicky lent me plus half a hippie sandwich. I also had a cup of coffee. About an hour before the race, I put on a caffeine patch, but I didn’t end up feeling it. If I experiment more with patches, I’ll use two. During the race, I had a Gu and water every three miles, which is my standard race day approach. All of that worked fine and I suppose it was a good chance to practice having breakfast on a bus!

When we got to the start, they made a huge deal about the “fuschia corral” which somehow seemed hilarious with our early morning pre-race excitement. We also saw Bill Rodgers in line for the port-a-potty, but I didn’t take his picture – that would have been mean! North Shore Strider and I had planned to stick together and make this more of a fun girlfriend race. We started out pretty slowly because it turns out, this race is HUGE! It was incredibly congested and we were bogged down in traffic for the first mile or so before things started moving more freely. I was very focused on staying at marathon pace, aiming for 8:45, and paying attention to how that felt. The rush of adrenaline and all the race stuff was distracting so this took some concentration.

Mile 4 turns out to be a pretty substantial hill through a golf course. I was feeling good. It was a beautiful day – it started out pretty cool but had warmed up to the mid-60s. I saw a guy from church on the hill, which was a fun surprise. I kept checking on North Shore Strider, but she was having a less good day. The 5 Hour Energy Shot she had tried wasn’t sitting well with her, unfortunately. At the top of the hill, I asked if she was good for picking it up on the downhill. A guy behind us yelled out that he was. I got cocky and shouted something like “Follow me down the hill!” Ok, that was sort of obnoxious of me, but whatever. I sped on down the hill. This was not goal marathon pace or even close but I didn’t want to waste a good hill! I vaguely remembered Coach Mick saying that most people run too fast uphill and too slow downhill so I figured I wouldn’t let that be me. I passed SO many people. I love running downhill. After about a mile of this – a full mile downhill! – I checked to see if North Shore Strider was still behind me. She was not. Oops. I slowed down, and even pulled off to the side for a minute, to see if I could find her. I could not. Damn. I hadn’t meant to leave her, though I knew she’d be fine. With that, I figured my fun on the hill was over. Back to marathon pace. 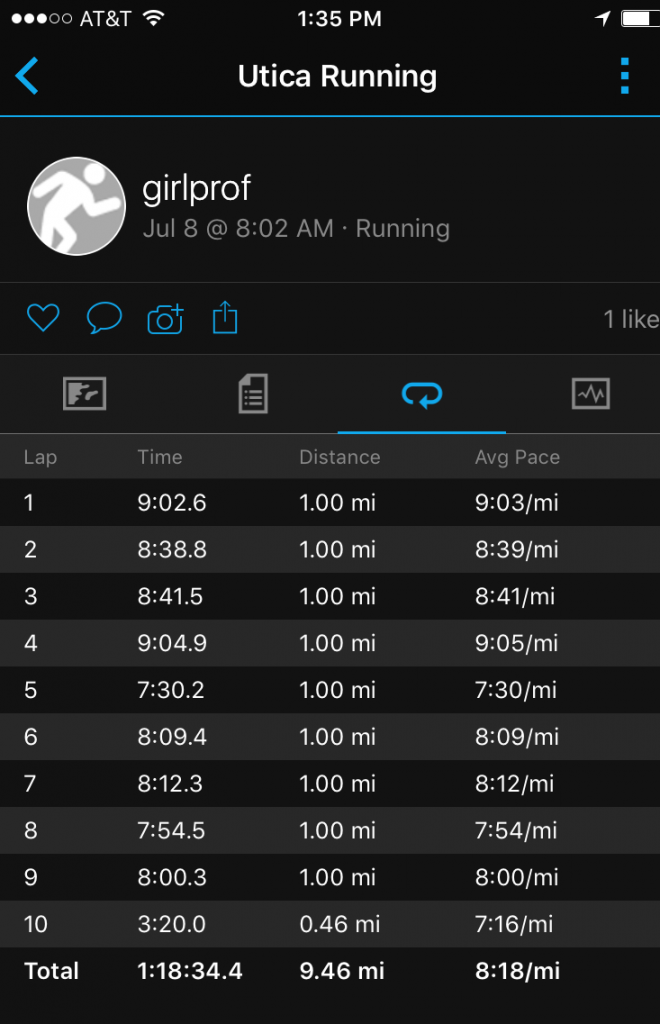 I itching to run faster though. I am generally pretty disciplined about keeping to a race plan. The idea here was marathon practice. I was fueling like I plan to. I forced myself back to 8:25-8:30 or so, which is still a little quicker than my goal pace. Everyone started passing me. No fun. Then I remembered. When I was texting with Coach Mick the night before, the very last thing he had said was: Have FUN! Well, goal marathon pace was actually not turning out to be fun. Hmmm. I ran past Bill Rodgers, but let him pass me back. Goal marathon pace. Same thing again – pass Bill Rodgers, then let him pass me. Goal marathon pace. Finally I just said, screw it. If this were an actual marathon, I am sure I would have stuck to the planned pace but it wasn’t. With only a few miles to go, I decided to kick it up a notch.

Now, things got fun. I felt great. The soreness from the mile race of the previous week subsided while I was running. It was such a beautiful day. There were tons of bands and loads of spectators. I came up on Bill Rodgers a third time. This time I called out to him: “Hey Boston Billy! Hi! I’m going to get my very first BQ at the Erie marathon this fall. You’re bringing me luck!” Yeah, I was being a bit nuts. But he gave me a smile and a big thumbs up as I cruised by. I figured I would just run this at about tempo effort. I didn’t need to race it – that wasn’t the point. But I also didn’t need to plod along at marathon pace – that wasn’t any fun. So off I went! Now, running through the sunshine, on the streets of Utica, with a ton of bands playing – THAT was fun! We got to the 9 mile mark and I thought – ok, babe, you wanted to work on your finishing kick – can you pick it up? Can you pass anyone here instead of being passed? Yes! I mean, a couple of guys passed me, but I passed some women and none passed me. Awesome! 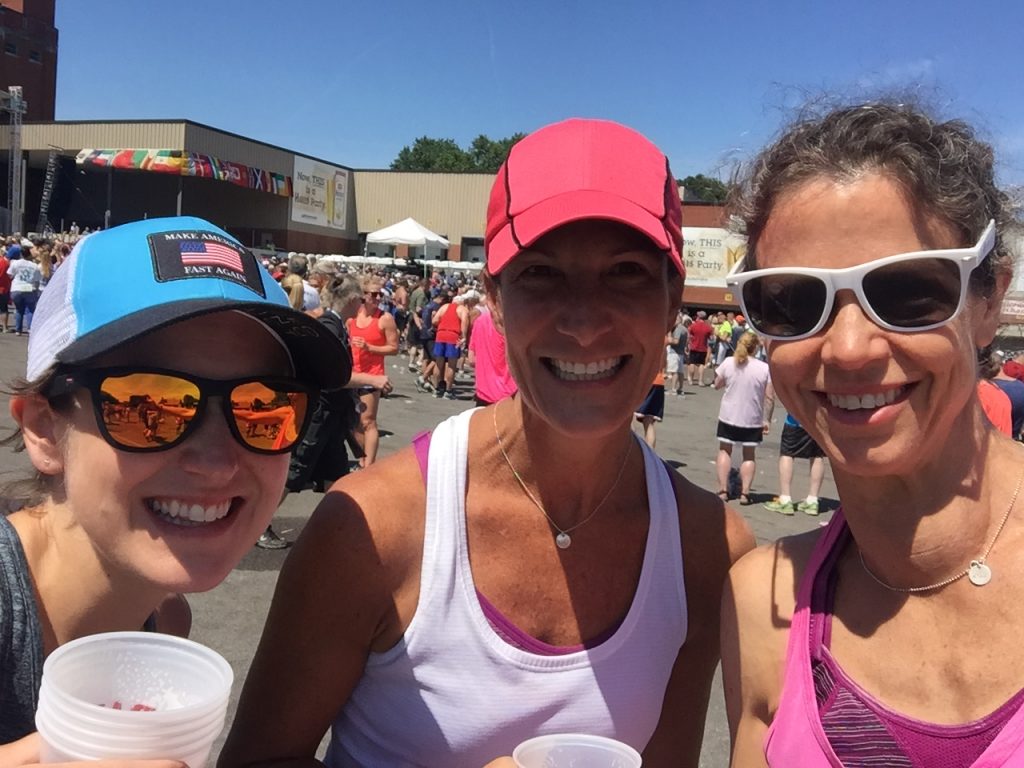 I finished in 1:18:16 feeling great. North Shore Strider wasn’t far behind me and Nicky had been done for awhile. She’s a speed demon! North Shore Strider and I both placed fairly well in our age groups, especially considering this is an enormous race and we hadn’t been pushing it. Normally I am not one to rave about a race’s after party but the atmosphere at the Boilermaker really is something special. The big draw here is the all-you-can-drink beer, but I enjoyed a great post-race massage, some tasty food, and a great live band. This day felt like the very essence of summer, good friends and a joyful run through the sunshine. I didn’t follow the plan, but I found some tremendous joy and on this day, that’s what mattered. I strongly suspect we’ll be back next year.