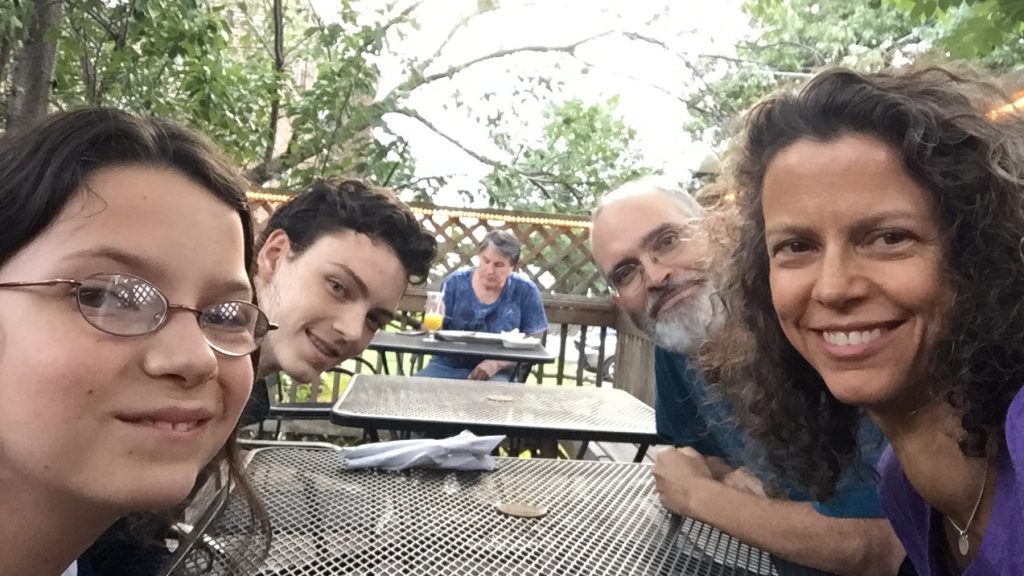 Where to start? I picked this race last spring after I didn’t get the time I wanted at the Donna marathon. I wanted another shot at a qualifying time for Boston 2019. Erie is the last weekend, indeed, the day before, Boston registration opens. The Erie course is billed as flat and fast and it’s a target marathon for people trying to BQ. Plus, the race takes place in Presque Isle State Park, a peninsula jutting out into Lake Erie. I grew up in Michigan and I feel a strong emotional connection to the Great Lakes. So Erie it was. I can highly recommend the race. It’s very well organized. The course is beautiful and it is indeed, flat and fast. The logistics are easy. The race has a very positive vibe to it – many runners are focused on getting a BQ, but I didn’t find that overwhelming. It’s great for spectators. The city of Erie is packed with brew pubs and lodging is cheap. This is not a big city race with lots of flash, but it has just what runners need to get the job done. So, Erie it was.

Rashi and I had originally intended to make a girls’ weekend out of the race, but when that didn’t work out, I knew I wanted to go with the Incredible Mervus and the kids. There is no better marathon supporter out there than Mervus. This was going to be a big race for me and I wanted my family with me. It turned out that my dad’s high school reunion was in Akron the same weekend so my parents decided to come to the race as well. 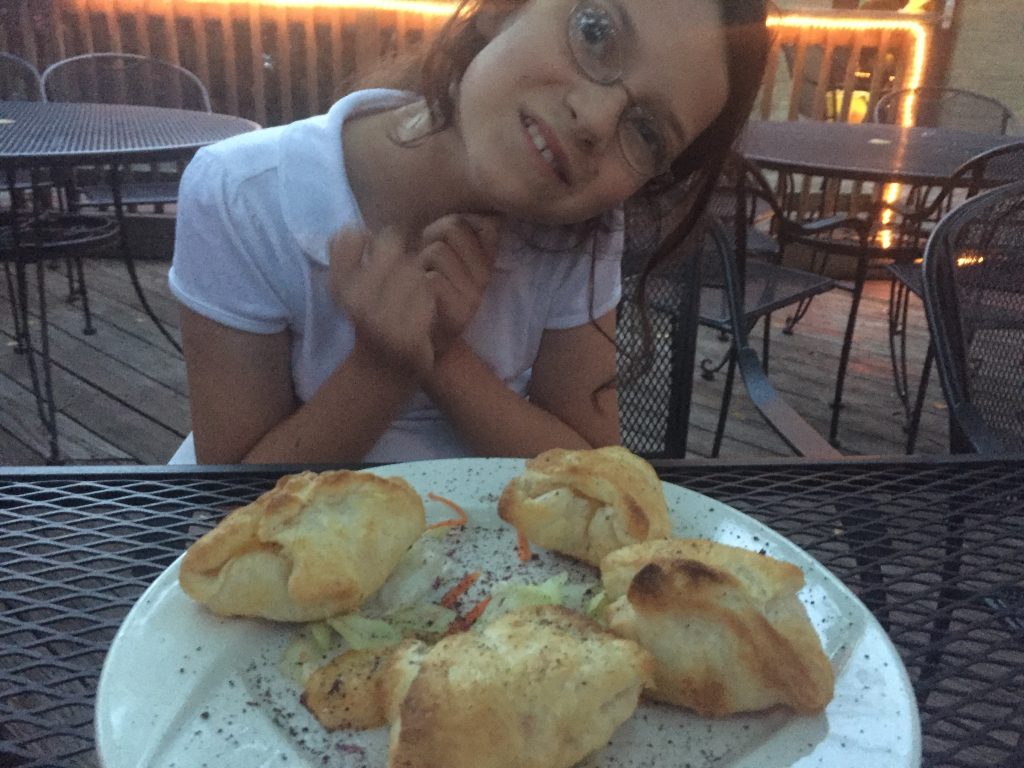 We pulled the kids out of school so we could get on the road Friday. It’s an 8 hour drive and I wanted a day to settle in before the race. We arrived at our lovely AirBnB on Friday evening and went to the Casablanca Grill for dinner. As a side note, I channeled a lot of my taper energy into restaurant research. I could probably write a small field guide on where to eat in Erie, especially as a vegetarian family not keen on old-fashioned Italian. The Casablanca Grill is a Syrian place and what a gem! They had the standard Middle Eastern fare like hummus and falafel, but also fatyer, a kind of cheese-stuffed pastry, outstanding mint lemonade, and the best baba ganoush I’ve ever had. We ate outside and it was kind of chilly. A good sign.

A word about weather. My last two marathons have been dogged with very high temperatures. The choice of Erie was a risk with an early September date, but I really wanted that shot at Boston 2019. It’s been so hot all summer and I’ve just trained through it. I’ve been incredibly inspired by Deena Kastor’s book, Let Your Mind Run, and especially her preparation for the Athens Olympics, which were going to be hot. When other people grumbled about this summer’s heat and humidity, I sympathized, but also thought: this is exactly what I need. Bring it, Mother Nature. At least this time around, I would have trained in the heat. But when it looked like race day temps might be in the mid-70s, with high winds as well, I did get in a bit of a tizzy. I even started researching other races for a potential late-in-the-game switch. As my personal weather frenzy peaked, Mervus and the kids said they would support whatever I wanted to do. Finally I got so worked up that Coach Mick took over and said he would be in charge of worrying about the weather. Somehow that strategy worked and I just let him worry about it. I woke up the next day to early morning texts from both Coach Mick and High Power Running Mentor #1 (HPRM#1) that the forecast had shifted and looked much better. Shivering on the patio of the Casablanca Grill the night before the race was therefore a very good omen. After dinner, we popped into the Whole Food Co-op for some late-night grocery shopping. Somehow Rose has decided that an outing to a “fancy” grocery store late at night is how every vacation should start and who am I to argue?

Saturday was pretty quiet. The kids slept late and Mervus and I caught up on some work. I went for a shake-out run. We went to brunch at Dave’s Diner which was also outstanding. Erie has some great food! I did some delicious carb-loading with a cinnamon swirl pancake that was to die for. The waitress recommended it and after Geneva and I both got it, she ordered one for herself as well. My parents had just arrived in town so they joined us. After brunch, we headed to the park for packet pick-up. 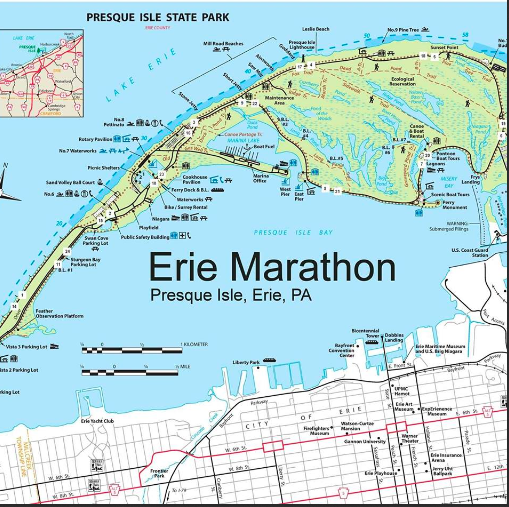 Presque Isle State Park is an island shaped like a tadpole with a long tail and a bulging head. The race starts at the entrance to the park and you run along the tail, over the top of the tadpole’s head, back underneath its chin to the tip of the tail, and then repeat that loop. We started by driving the course and it was beautiful. Lake Erie is often visible from the park road. Runners travel through marshes and within sight of beaches. The course goes past a lighthouse and a pretty lagoon area. I was struck by how much it looked and felt like home, which made me feel good about the race. Erie was a good choice for me. Returning to the tip of the tail, we found packet pick-up. 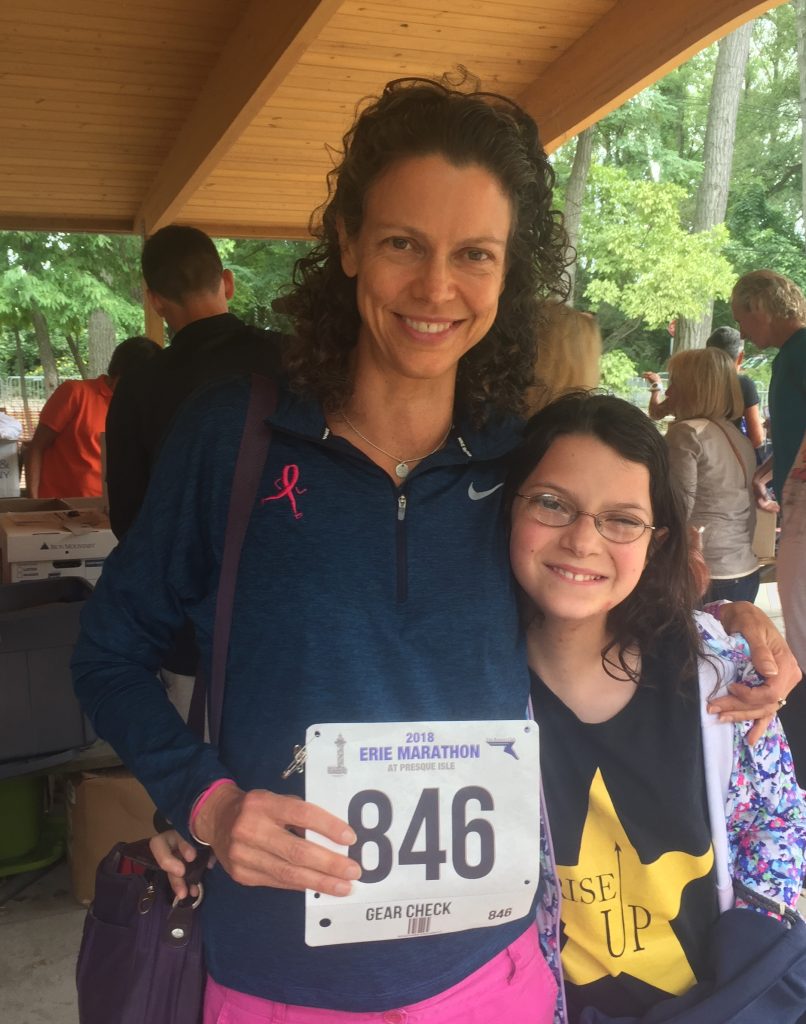 Erie is a serious target race for people wanting to qualify for Boston. For a small race – 2200 entries – I’ve never seen such security around bib pick-up. You have to show photo ID and they also take your picture with your bib. I was told there were several locations along the course with photographers, who would be taking pictures in order to ensure that everyone was running with their own bib. The race does not have runner tracking, but someone at packet pick-up told me they did have several “cheater mats” on the course. They don’t announce where they are because they don’t want people to know the locations ahead of time. They catch people cheating every year. Yikes.

The expo is small, just a few booths, but I found some fun socks and a cheap long sleeve shirt I could use for a throwaway, sparing us a trip to Erie’s Goodwill. We also got some good intelligence on how to spectate the race. I had thought my gang could sort of follow the runners along in the car, parking at the various beach parking lots to jump out and cheer. The car traffic flows around the loop in the opposite direction from the race traffic, however, making that strategy more difficult. A race official suggested stationing one group at the start/finish area and the other at the Cookhouse Pavilion, near where the tadpole’s tail meets its head. Both groups would be able to see me four times, twice per loop. Plus, if my parents were at the Cookhouse, they could arrive quite early and park their own car there, giving them a place to hide from the weather if it got bad. We were still expecting possible rain and wind.

I also talked to the pacers at the expo. I still hadn’t quite worked out a pacing strategy for the race. I had been hoping to run 8:45 pace (3:49 finish time) before the weather scare. With the potential heat, Coach Mick and I had agreed I should slow that down, but now the temps were predicted to be cooler again. However, there might be wind. In any case, at packet pick-up, I met Pacer Chris, the 3:55 pacer, and I really liked him. He had a fun spirit and a lot of confidence and experience and I felt sure he would come in on time. Then again, I really wanted to run my own race and not feel tied to a pace group. It’s very different to run with an unknown pacer than with a close friend. After more discussion with both Coach Mick and HPRM#1, I came up with a plan I was happy with. Start with Pacer Chris and the 3:55 group. Stay with him for 3-5 miles, depending on how I was feeling. Then speed up from 8:55 per mile to something closer to 8:45 per mile until the 20 mile mark. See what I could do for the last 6 miles. My training said I might be able to run even faster than 8:45 per mile, but I didn’t need to do that to get a BQ. The faster you go, the bigger the risk of blowing up. A marathon is a long way. I was happy with the plan.

After packet pick-up, Mervus went and picked up a few extra groceries, while the kids and my parents and I went back to our AirBnB. I did some final pre-race meditation and then we watched Spirit of the Marathon and had my standard pre-long run dinner: whole wheat penne, tomato and basil spaghetti sauce, vegetarian Italian sausage and broccoli. I did final pre-race preparations, took a picture of flat Sarah, and we made sure the kids had what they needed for an early morning start. Lights out at 10pm, later than I would have liked, but I was asleep instantly. After all, Coach Mick had taken over worry-duty so I had no reason to stress. 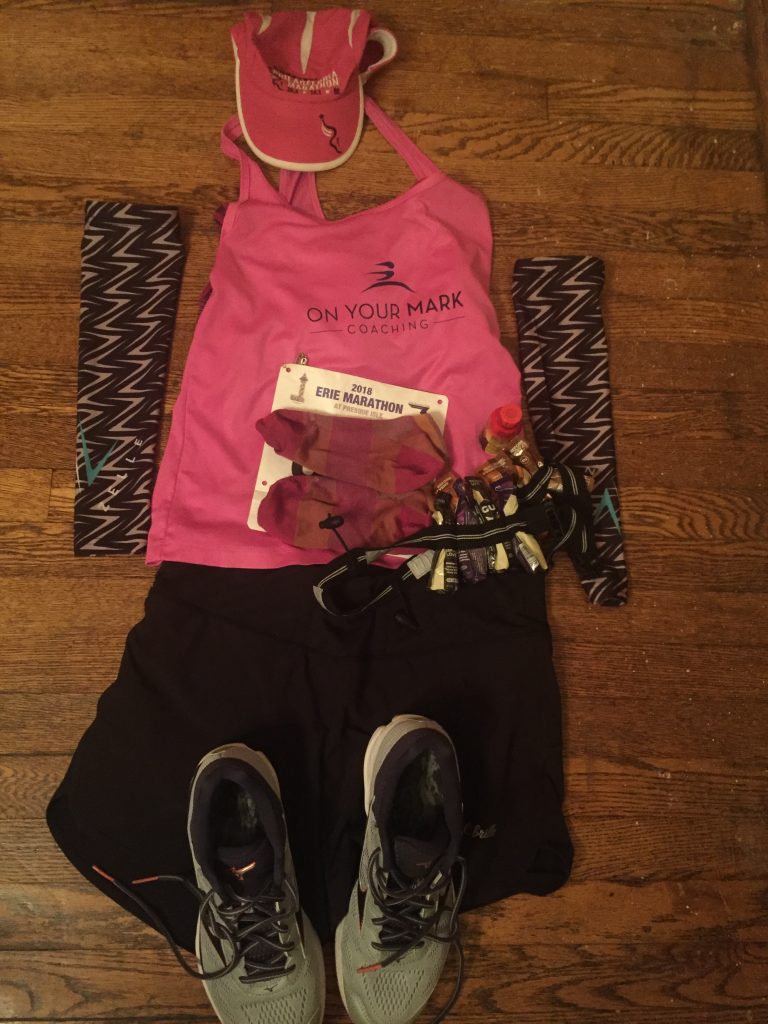