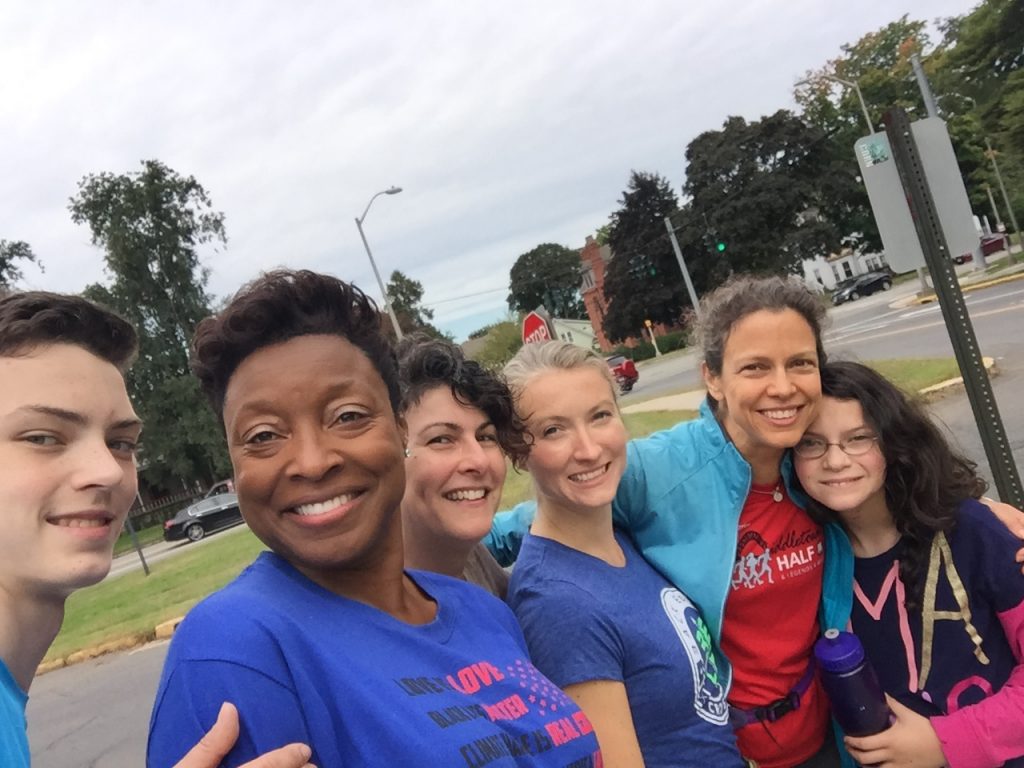 I’m going to use this post plus a follow-up post to share my experience with EPAT (Extracorporeal Pulse Activation Technology), a treatment I’m getting for plantar fasciitis. I’d heard a little bit about EPAT during my first serious bout with PF in 2016-2017. To my mind, it fell into the category of fairly extreme measures, along with PRP injections. I ended up in the boot for five weeks, the PF got better, and I assumed that was the end of it. Until fall 2018.

To remind loyal readers, the dreaded plantar fasciitis returned in August about a month before I ran the Erie marathon. Coach Mick switched the majority of my easy runs to cross training, the PF subsided enough and I got through the race fine, earning my BQ. But after Erie, all attempts to return to running ended with an incredibly painful foot. I went back to the Maestro, my amazing physical therapist. After initial conservative measures did nothing, he said we had better get some images in case I had another tear of the plantar fasciia.

This time, I wasn’t messing around with random doctors. I went to a fairly fancy podiatrist in West Hartford at a practice that seemed to specialize in treating runners. He more or less guaranteed that he’d be able to fix my feet with EPAT. We tried some oral steroids and yet another pair of orthotics, just in case. That went nowhere. I was starting to get depressed and worried. Sure, I had time before I needed to start training for Boston, but last time around, it took nine months for the PF to go away. I didn’t have that much time. Furthermore, I had hoped to get a bit of a fitness boost by maintaining my mileage at a level that I hadn’t managed before. Instead I had to stop running entirely. Plus, this podiatrist was starting to set off some alarm bells. I know PF well enough to know that no treatment works 100% of the time, yet that’s basically what he promised. He also did x-rays, and discovered I had heel spurs and blamed the PF on them. Yet I know the literature has shown no connection between heel spurs and PF. Also, EPAT was sure not cheap. He was charging around $750 for three treatments and it’s not covered by insurance.

As I was mulling this over, I started a running group at my church. Our Sunday afternoon post-church run/walks were sometimes much more painful to my feet than I cared to admit, but they fed my soul like nothing else. On a trip to Fleet Feet to get the church runners fitted for shoes, I discovered the same EPAT brochure my podiatrist had, but with a different doctor’s name on it. Fleet Feet had had this doctor in the store demonstrating EPAT earlier in the fall. One of staff had been successfully treated for Achilles tendonitis, another recalcitrant ailment runners are prone to. This doctor offered five treatments of EPAT on both feet for $500 instead of three treatments of one foot for $750. I started investigating and found several practitioners across Connecticut offering EPAT at an astonishing range of prices, but Dr. Bellezza, of the Fleet Feet brochure and Bristol Hospital, was the most affordable by far.

So what is EPAT exactly? Even though I’ve read a lot about it, it’s not simple to explain. It’s sort of like extra-powerful air waves that pummel your feet. Many runners have had ultrasound therapy at some point in time and know that the idea is that the soundwaves penetrate your body, cause a slight amount of damage, and this triggers increased blood flow to the treated area, which promotes healing. Normal ultrasound is not invasive, not expensive once you have the machine, and completely painless. The Maestro lent me a machine for awhile and I gave myself daily treatments at home. These treatments had no noticeable effect and that’s one of the problems with ultrasound. There isn’t a lot of evidence supporting its effectiveness, at least not in treatment of plantar fasciitis.

EPAT is somewhat different, but a similar idea. The air waves used in EPAT are much more powerful than standard ultrasound and delivered differently. Extracorporeal Shockwave Therapy (ESWT), yet another therapy, uses electromagnetic waves for the same underlying purpose – to break up scar tissue and cause a little damage that triggers your body to re-start the healing process. ESWT is more intense and requires anesthesia, but only one treatment. EPAT is less painful (everything’s relative…), but requires multiple treatment sessions. The use of ESWT/EPAT as a treatment modality was discovered in Germany and has been used for decades in the treatment of kidney stones. The waves simply blast the stones to smithereens. These therapies are much more widespread in Europe and Australia, where it is often covered by insurance. Use of ESWT/EPAT was permitted by the US Food and Drug Administration in 2000, meaning the FDA found that the technology did not cause harm. Despite multiple subsequent studies showing the benefit of these therapies, insurance companies have yet to be convinced and this treatment is not generally covered by insurance in the USA, hence the free-for-all when it comes to pricing.

Of course, I dug into the scientific literature on the effectiveness of EPAT in treatment of PF. I have an academic library at my disposal and anyway most of the papers are publicly available. I started doing some reading and I was impressed by the results. Whereas you’d be hard pressed to find peer-reviewed journal articles with evidence-based research supporting the treatment of plantar fasciitis with PRP injections, several papers had found quite good results in treating PF with ESWT. I decided to go meet with Dr. Bellezza.

Here are links to some of the studies on the effectiveness of EPAT/ESWT.

Dr. Bellezza works out of Bristol Hospital but his office is in Southington. Note, this blog has the practice of giving everyone cute, hopefully amusing names, but it’s not all that hard to decipher who is who in the cast of characters. I’m not disguising Dr. Bellezza’s name because I want him to be easy to find. Here’s his office phone number: 860-426-0252. Our initial appointment went really well. He didn’t promise 100% success – he quoted success rates from some of the journal articles I had read. I asked him about where he had learned EPAT (Seattle area, during residency), how often had he done the procedure (many times as a resident, 3 times last week as an independent practitioner – he is just starting). Why did Bristol Hospital decide to get an EPAT machine? (The hospital CEO had terrible plantar fasciitis and wanted to try it. Yes, his feet are better now). Could I do just three treatments and see if that worked in order to save money? (Yes, of course). Perhaps most importantly to me: Could I run while receiving treatment? Absolutely, as tolerated. Nothing in the research says this is a problem. Olympians and other elite athletes get treated with ESWT all the time and train through it. Hmm. West Hartford guy had said I had to take a full month off. Dr Bellezza was sounding better and better. He didn’t even blink when I pulled out my laptop to make notes during our appointment. I sent him a follow-up email later in the day and he responded in less than 20 minutes. Maybe this starts to give an idea of how seriously I screen care providers! I’m very picky about who gets to join Team Professor Badass, but I had found my podiatrist. I talked it over with the Incredible Mervus and we decided to at least try three treatments. This running hobby ain’t cheap, no matter what they say, and I wanted to be able to make it to the starting line in Hopkinton.