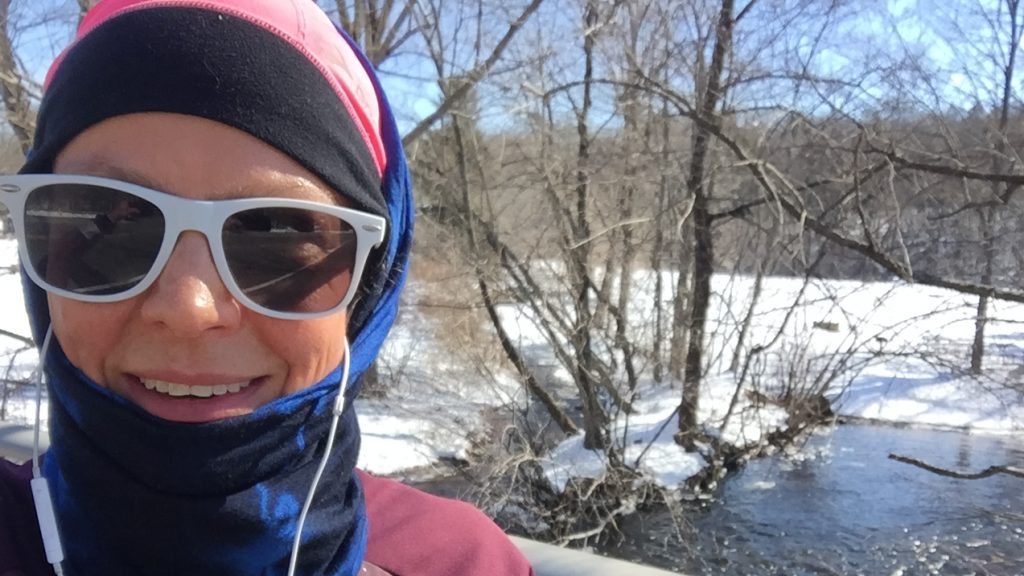 It’s been about three months since I published a training log, which is the first 75% of the Boston training cycle! In fact, the very last week I posted a log was the first week of Boston training. To refresh everyone’s memory, Coach Mick flagged December 10th as Boston Training Day #1. That week featured a track workout of 5x800s, some crappy weather, a not great mental attitude, and a foot that was still painful.

I’m not going to go back and fill in all the details for the last three months so I thought instead I’d just note some of the highlights (and low lights). This is great timing as this is the last week of peak training before taper starts.

This training cycle has featured some obstacles. Whereas training for Donna had me grateful to be back running pain-free and training for Erie had me coming off a string of PRs, training for Boston has been, well, not those things. The most challenging obstacle was (was!) the continuing issue of the plantar fasciitis. It cropped up before Erie and refused to go away. I eventually sought out a treatment called EPAT. With my last EPAT treatment in late November, the podiatrist said I could expect to see the full effect in 6-12 weeks, some time between January 1st and February 12th. [Of course, I still called him after three weeks to ask why my foot was still hurting. He said, be patient, lady!]

I made a choice with EPAT. I thought it was my best chance to get rid of the PF. The doctor said I could train through it. I knew that it might mean running with some foot pain and that turned out to be true. I underestimated was how mentally and physically draining I would find that experience. I’m still happy – very happy! – I decided to do things this way. I’ve been able to train. The foot pain gradually eased off until indeed, in early February, it subsided entirely. But it left a bit of a mark on my mental state. I found it very hard to run with joy while also running with pain. Of course, New England winter weather was as crappy as usual. I also got a severe case of the stomach flu in late December and spent Christmas vacation glued to the couch. I’m a person with a lot of natural perk, but all of this made me rather weary.

I’ve race four times this training cycle, two 5Ks and two half marathons, but I’ll do separate race reports on those. The first 5K was January 1st and it was slower than I had hoped. By early January, I was in a pretty serious funk. This was NOT what I had had in mind when I started training for my very first Boston!

The low point (one low point…) was January 10th and 11th. On January 10th, I did 9 miles for a mid-week longer run and felt awful. It was snowy and windy and I under-fueled and I ran on a ton of hills to make things extra bad. My brain was really in the toilet. I was doing way too much comparison with other people who were running without my struggles – though of course they probably privately had their own. If this was what the whole training cycle was going to look like, was I even interested? There was no joy.

High Power Running Mentor #1 really turned that one around for me. After the yucky 9 miler, we texted for a long time about what it means to run when it feels awful, whether bad runs are more frequent as you try harder, whether I had needed more of a break after Erie and perhaps most importantly, if there were any options available beyond enduring the suck until Boston. I was ready to endure the suck, but I wasn’t excited about it.

The next day I had a hard tempo run and I had to do it on the treadmill, which I don’t like. But I woke up to a new playlist from HPRM#1, designed specifically for that workout, filled with songs that addressed all the concerns I had raised during our long conversation. I wish I could say that I went downstairs and banged out the tempo run, but that’s not true. I went downstairs and got on the treadmill and I had to stop three times to convince myself to keep running. It felt awful and I still wasn’t quite hitting the pace I was supposed to. It was a deep dark look into whether or not I wanted to keep training for this marathon or keep running at all, frankly. But every time I stopped the treadmill to ask myself those questions and re-group, the answer was the same. Yes, I want this. I want this very, very much. Even when it sucks pretty damn hard, I still want to train for marathons and try to run them as fast and as well as I can. For damn sure, I want to run Boston. So three times I stopped the ‘mill and three times I re-started it again. At the end of the run, I was a mixture of embarrassed that I had stopped at all and proud that I kept going. But two months later, I know that was one of the most important runs of the training cycle and one that I’ll remember a long time. I found a little piece of myself that had gone missing on that run, one of the best parts of myself.

One aspect of training, I figured out on my own. Mid-week longer runs are usually some of my favorites, but I found them challenging this time around. The Incredible Mervus is out of town Wednesday night so I can’t run early Thursday morning because I can’t leave the kids alone. Instead I get up early and work, help get Aidan out the door, work more, help get Rose out the door, try to resist the temptation to go back to work and instead start running. Try to finish running before my early afternoon office hours. This whole routine proved tricky from a timing and fueling and route perspective. Coach Mick also turned a lot of these into progression runs so they weren’t always simple from a running perspective. Midway through the training cycle, I started to get a handle on them though and that felt great. Now, I always do the same route (it’s not hilly!). It turns out that with breakfast at 6am, I have to eat something else before running at 10 or 10:30am. I have to be very disciplined about moving back and forth between work and kids and running in order to fit it all in. But getting this piece of training under control and starting to nail these runs felt great. 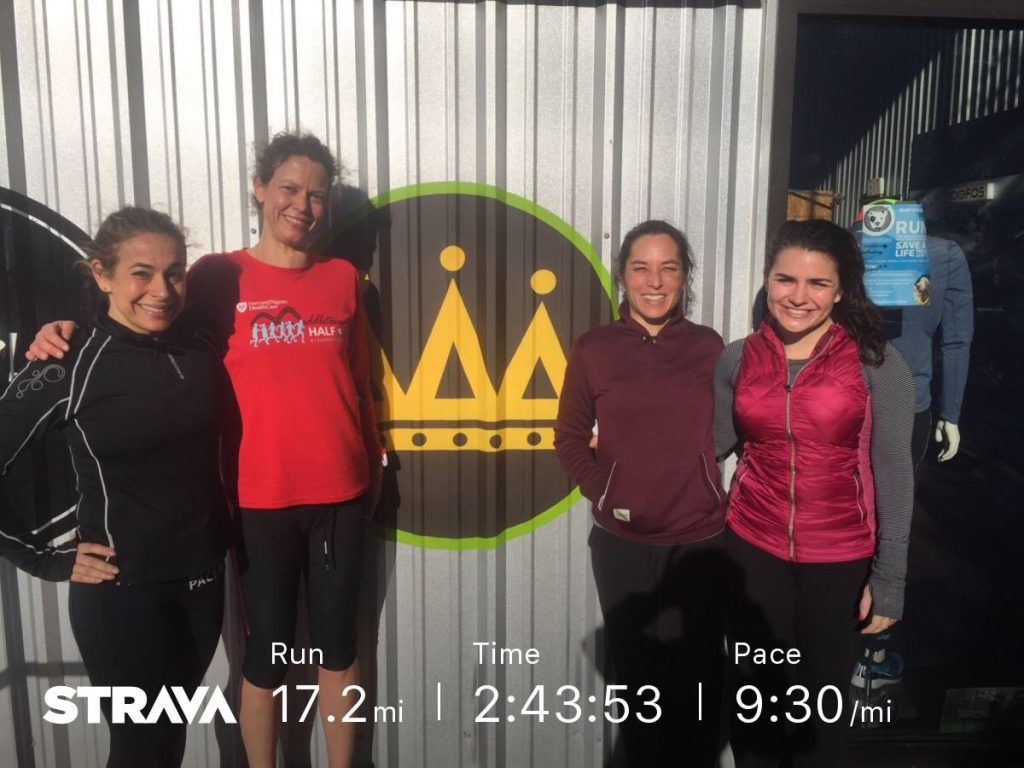 The last update is the story of the long run gone terrible, then good again. I had some good long runs early on. I was on the road three weekends in a row in January so figuring out how to fit these in was complicated. The best thing I did was sign up for a 17 mile training run with the Rogue Running group while I was in Austin for work. Another weekend I ran about 11 miles in Central Park while in NYC with friends. Sometimes I ran with my girlfriends at home. 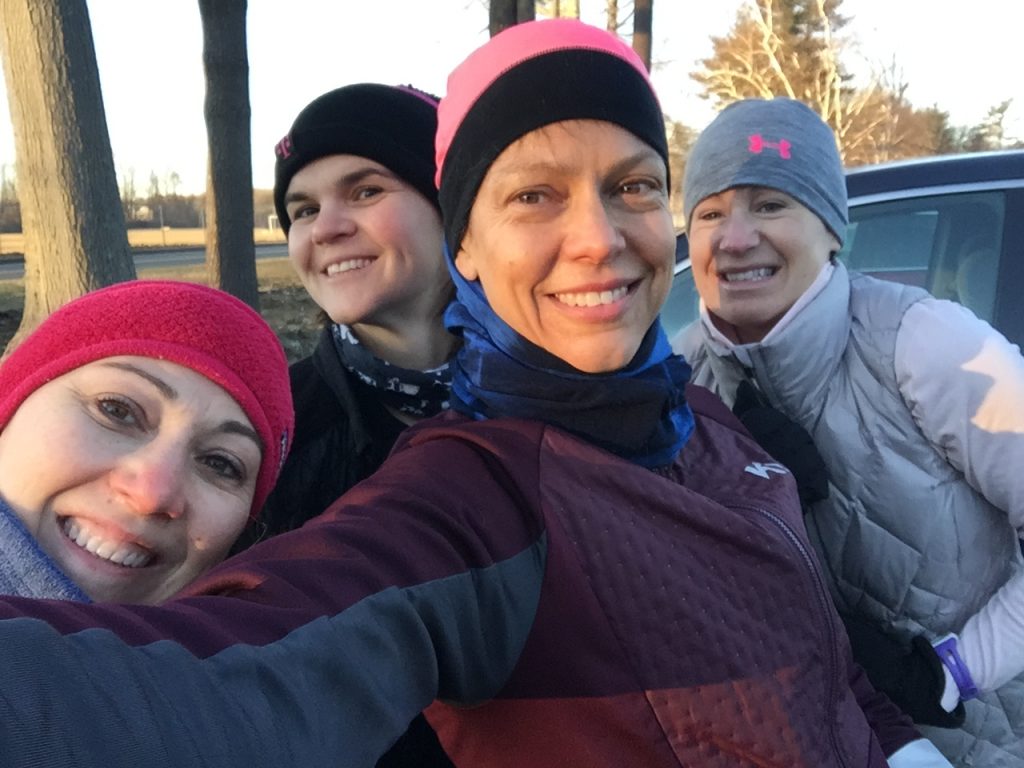 On February 20th, I did my first 20 miler and it was horrific. There’s just no other word for it. It was really cold ( with a “feels like” temp of around 5 degrees), I wasn’t even close to the pace prescribed by Coach Mick, and halfway through the run, my adductors starting hurting incredibly badly. It ended up being one of the worst runs of my life, not exaggerating. It shook my body and my confidence a lot. I don’t know what the adductor issue was but it took two massages and two PT sessions to fix the right side and the left side lingered for two additional weeks. The only good thing about this run was that my foot, which had been steadily improving, didn’t hurt much at all. Also, I finished all 20 miles.

Psychologically, though, this run was bruising. I felt like I was back at the stage where I’d been with the January tempo workout except maybe HPRM#1 was losing patience with me and maybe I was losing patience with myself. Coach Mick, luckily, is a saint, with endless patience. We talked a couple of times and he kept giving me options until we came up with a long run strategy that I didn’t find terrifying. I just didn’t want to experience that kind of pain again. I ended up with a 12 mile progression run the following week and it went fine. The next week I did 18 miles and if I was a little disappointed in my pace, it was basically fine. 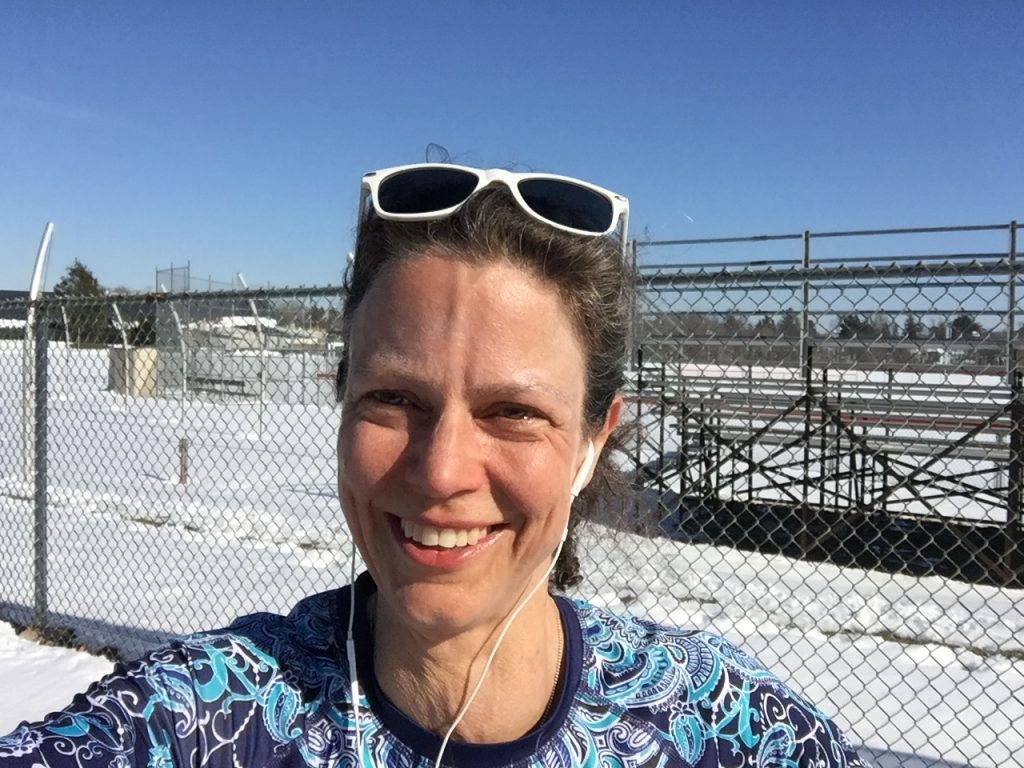 Then, on March 9th, I did 20 miles again. This time alone. It was warmer and I went later in the day to simulate fueling for Boston, when I will presumably start around 11am. I nailed this one! I felt really strong the whole run. It’s the first time I’ve ever done a 20 mile training run in under 3 hours. It was such a confidence booster and I am really starting to think that my fitness is in a better place than I realized. With all the crap that has been going on – the foot and the illness and the travel and the adductor, but probably most of all my mental darkness – it’s been hard to see the progress that has been happening beneath the surface. But I’ve been doing a lot of running so that progress is happening even without my noticing and now I’m starting to feel it, which is really awesome.

Over the last few weeks, the foot pain has faded, stomach flu has become a memory, I recovered from the 20 mile horror show – and something else wonderful happened. I started to enjoy running again. The winter was really a grind, but I truly love this sport. I love the structure and satisfaction it brings to my life. I love learning new things about how to train or what the elites are up to. More than anything, I love the people running brings into my life. To have the joy return to my personal running has been like rediscovering a lost friend. I am so happy to have it back.