“Instructions for living a life.
Pay attention.
Be astonished.
Tell about it.” ― Mary Oliver

An obvious and yet astonishing sentence.

I first started dreaming of Boston when Fast Friend and I were training for the Providence marathon in spring 2014. I didn’t really know what Boston was all about, but she did and she said we should run it together some day. I sure hope we do! Five years ago, she planted the seed of this year’s race. So here’s how Boston 2019 played out. If you want the TL;DR version: I had an amazing weekend in Boston with my family. I saw many friends, old and new. I ran a smart race that I am very proud of. My time was 3:53:21, which is a 44 second PR and a BQ with a 1:39 cushion. I am still very tempted to sleep in my jacket. My medal is never far away and the smile hasn’t left my face. Now, a few more details!

For much more detail on this training cycle, see previous blog entries. The Boston training cycle had some ups and downs. When it started, I was still dealing with a lot of foot pain from a recurrence of plantar fasciitis. Over Christmas, I got stomach-flu-from-hell. I spent way too much time in the comparison trap, especially early on. In February, I had the most painful 20 mile run of my life. But, I also kept training. I did more consecutive 50 mile weeks than ever before. I ran a couple of half marathons that felt pretty good. By the end, I started to believe I could run a good race. In fact, maybe I could run what the folks at Rogue Running call a beautiful race. 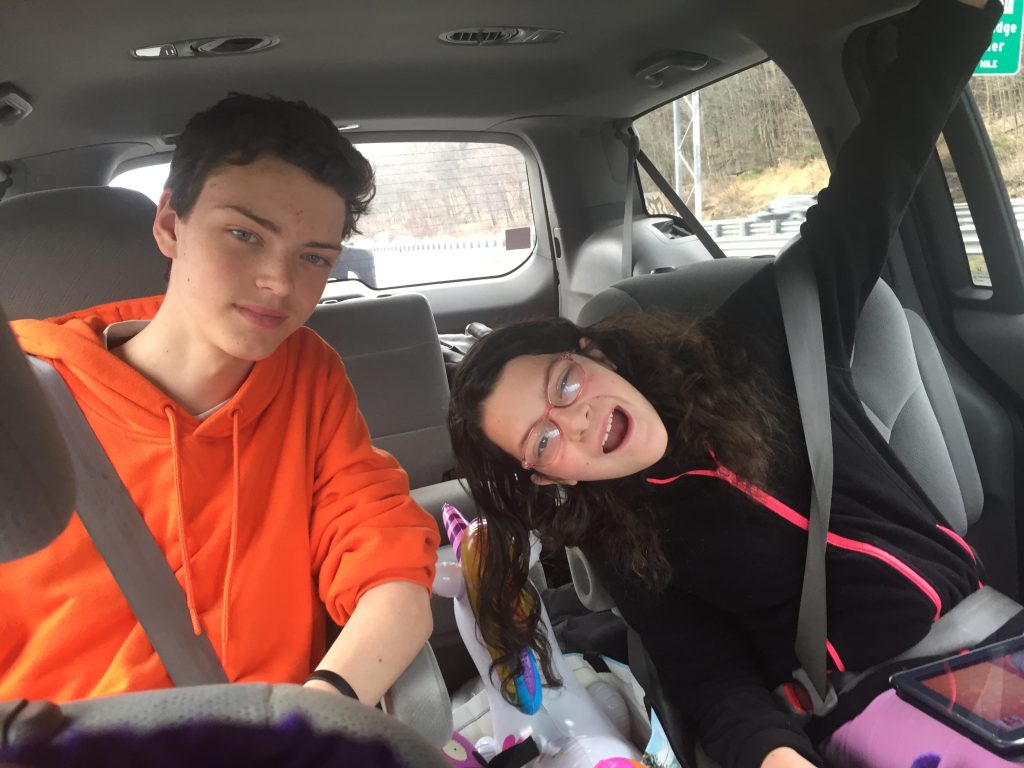 I qualified for Boston at the Erie marathon in September 2018. Before Erie, the Incredible Mervus and I were not sure about whether to bring the kids, if and when I got to race Boston. But after Erie, it felt like our family was an unstoppable marathon team and we knew we wanted to bring them. We arrived in Boston on Saturday around lunch and had a couple of days of non-stop fun. 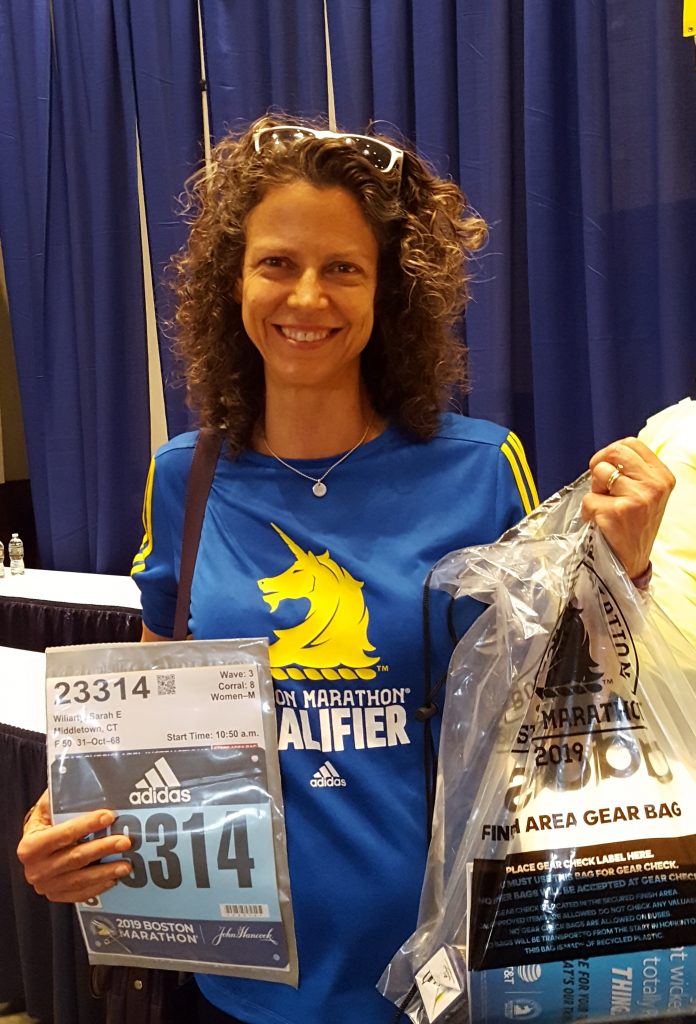 We stopped for lunch and then on to the expo. The most important job came first: we picked up my bib. My very own Boston bib! 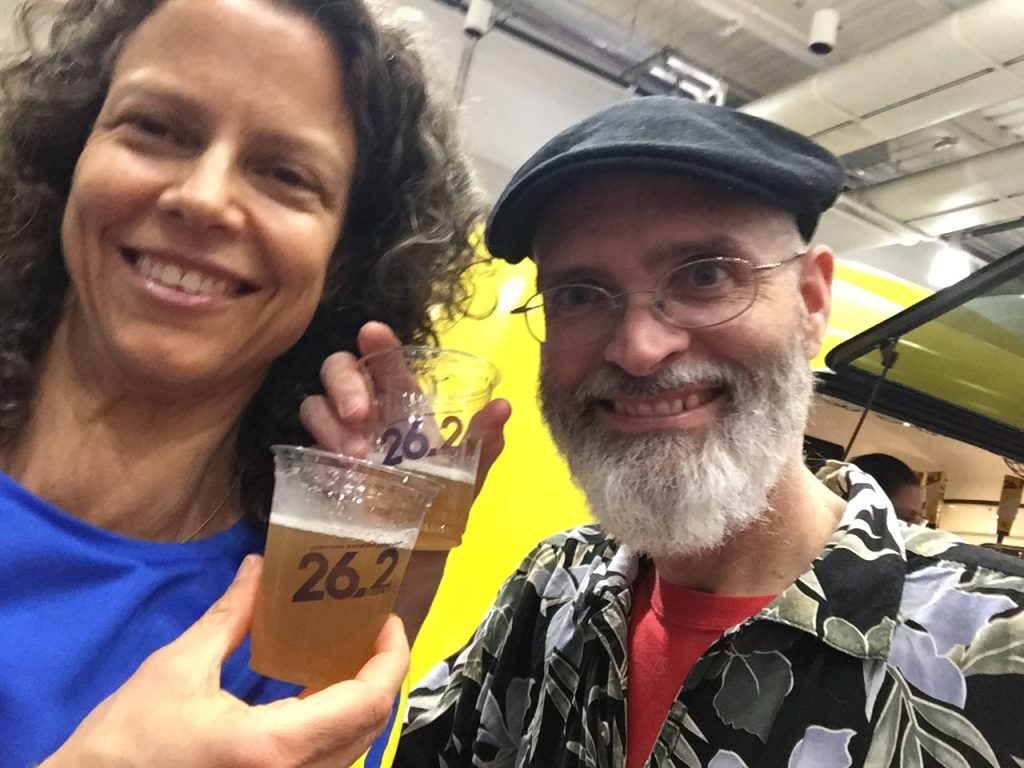 I bought some gear and we had some 26.2 Brew and did some shopping. But I had told Rose that we might be able to hear Meb speak and she really wanted to. I might have kept shopping, but they kept announcing that Meb’s talk was about to start and Rose kept begging, so I finally gave in. I’m kind of thrilled to have a kid who begs to go hear Meb. Who wouldn’t be? The talk was fabulous. Meb spoke about his new book and told some great stories. He talked about wanting to drop out of the 2012 London Olympics when the race wasn’t going well. When he tried to figure out why he should keep going, he remembered his daughters and how he always told them to do their best. He went on to move up from 21st place to fourth! After he spoke, we got to shake his hand, and he signed my bib and Rose’s poster. 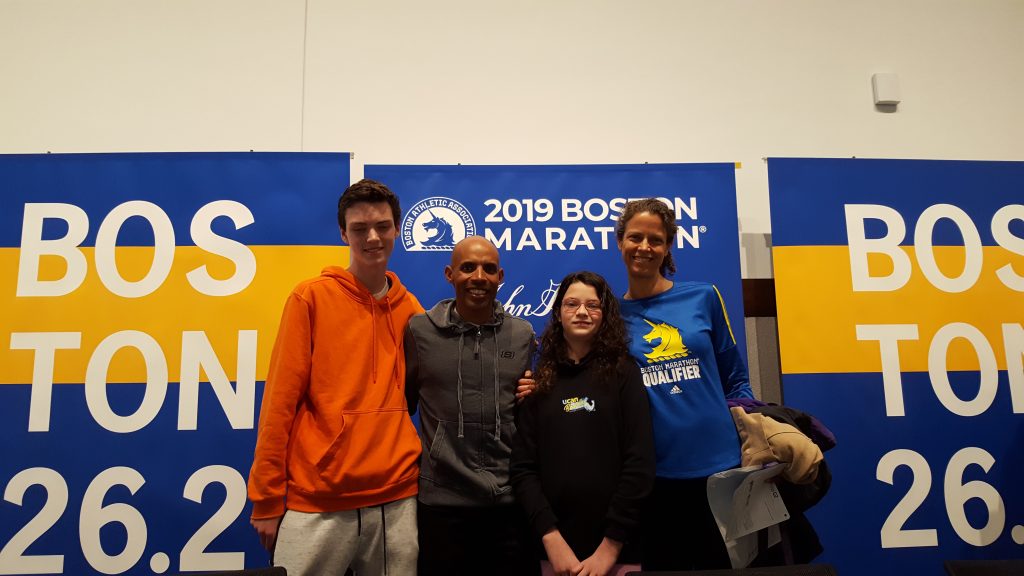 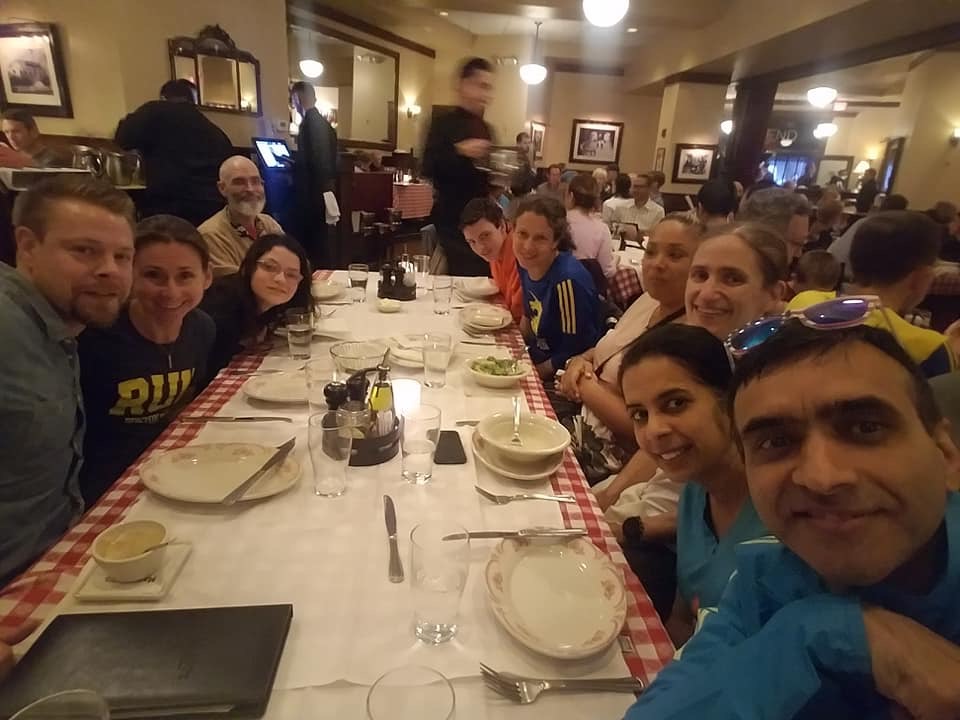 Saturday night we had dinner with the On Your Mark team, though sadly without Coach Mick. Still it was great to see friends in person, when we normally only meet online.

On Sunday morning, I got up and met the Boston Buddies for a shakeout run. I joined the Boston Buddies Facebook group last summer at Coach Mick’s insistence. I was pretty quiet before Erie, but once I had my qualifying time, I started to speak up. I was, quite honestly, looking for something like a team; I found a new running family. The Buddies are full of information about all things Boston. But they are also full of support for anyone who is struggling, whether it’s with a run gone badly or a fundraising target that feels impossible to meet. Or something more serious like an unexpected accident or the passing of a loved one. It was great to meet so many of them in person! 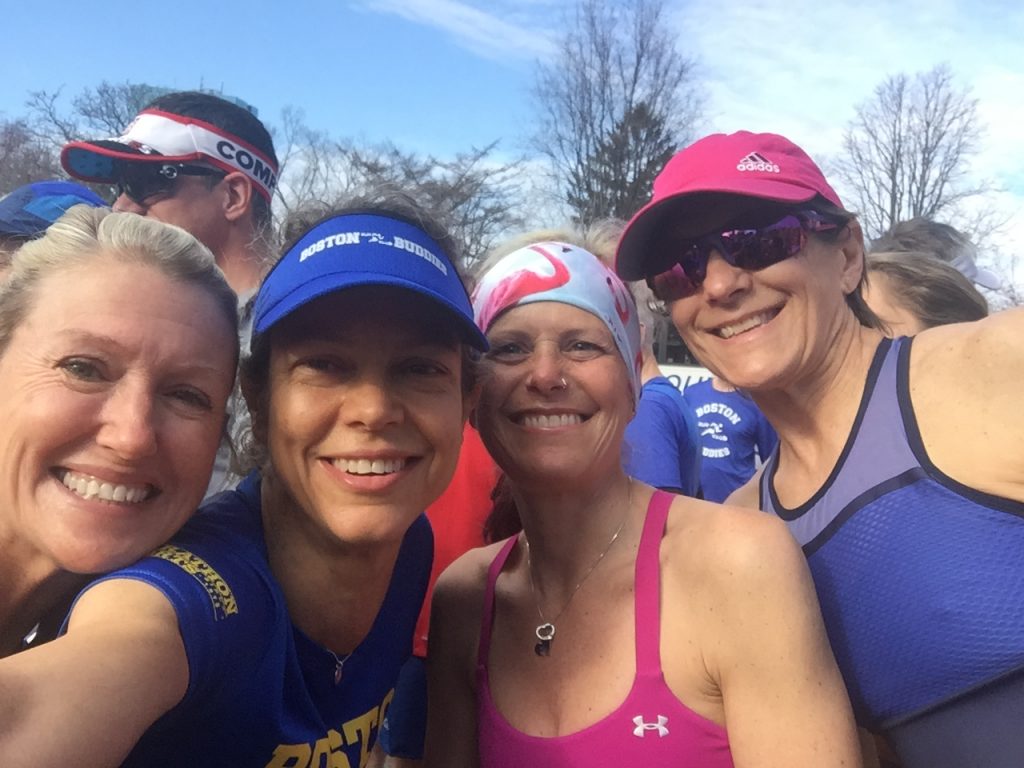 I was especially happy to meet one particular Boston Buddy, Diamond. Diamond qualified with the exact same time I did. She lives in Jacksonville and Coach Mick was the first Boston Buddy she met in person. We had started talking about whether we might run together, or at least start together. We stuck together at the shakeout run and had a great three miles. She’d been dealing with an injury, but the shakeout run went pretty well. 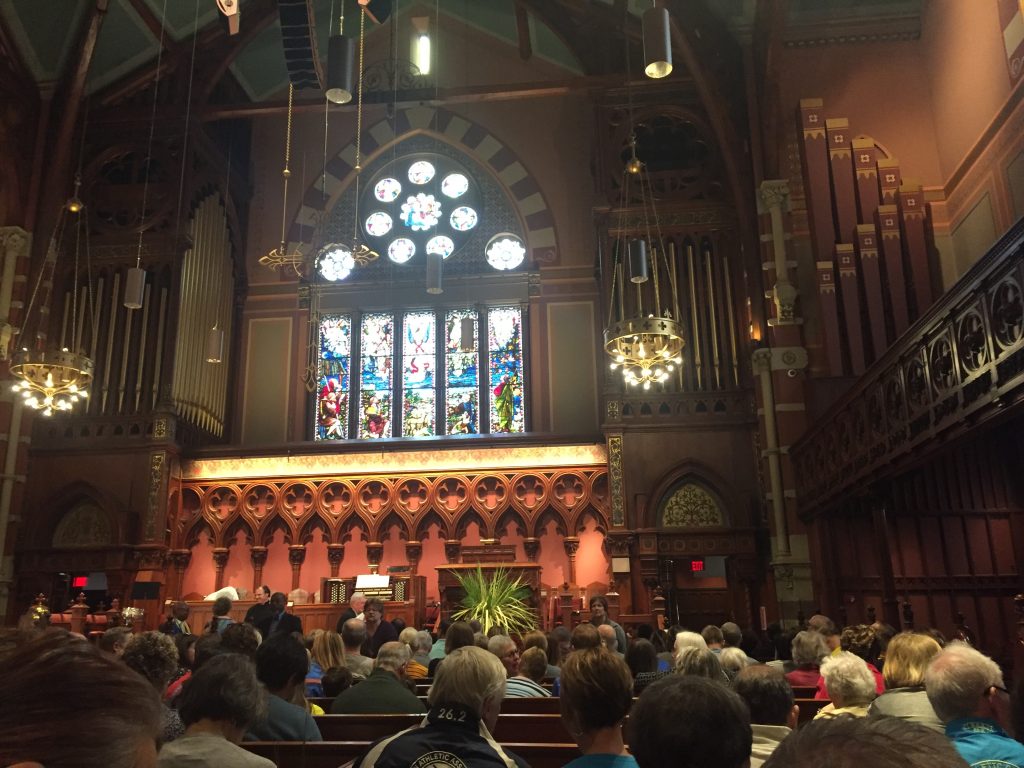 After breakfast, Diamond joined my family for the Blessing of the Athletes at Old South Church. Old South Church is also known as the Church of the Finish Line and they have a special service the day before the marathon. This year Marathon Sunday happened to also be Palm Sunday and the sermon was about how the bible travels from the garden of Eden to the city of Jerusalem. Both places have their wondrous aspects, but the city is especially valued because it brings together such a diversity of humanity. Of course, the Boston marathon also travels from the countryside of Hopkinton to the city of Boston and also involves a huge diversity of humanity coming together for a shared and I would say, glorious, purpose. It was an astonishing service, one of the most moving I’ve ever heard. I felt well and truly blessed! 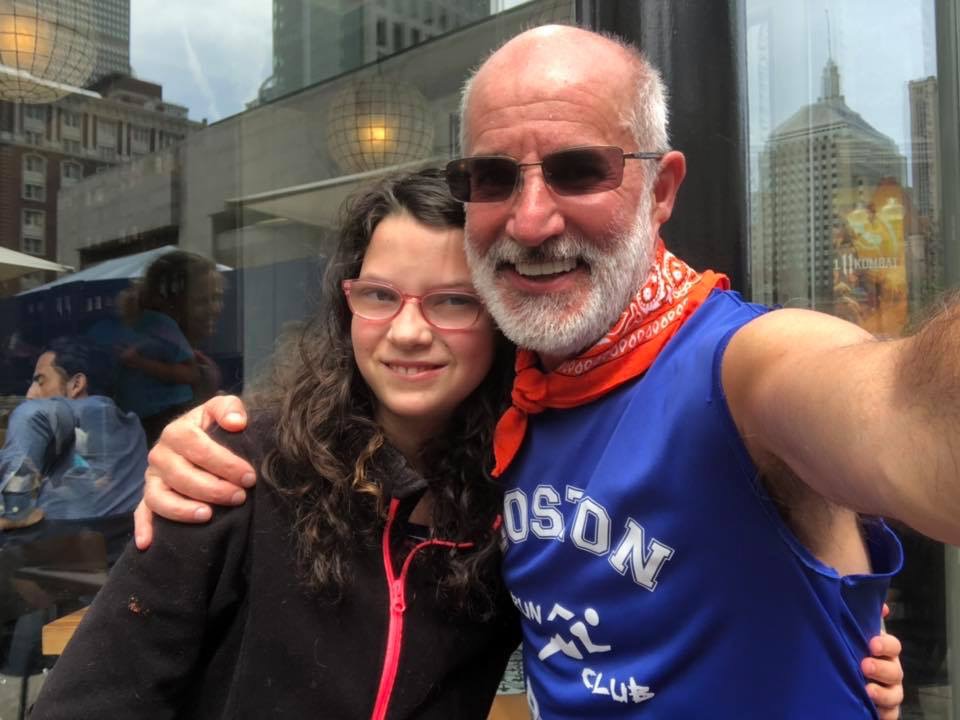 After church, we grabbed a quick lunch at a restaurant a few doors down. The Boston Buddies really invade Boston. I ran into friends pretty much everywhere we went, but at lunch, we were lucky enough to eat next to one of the ringleaders, who was quickly charmed by Rose and very much vice versa as well. 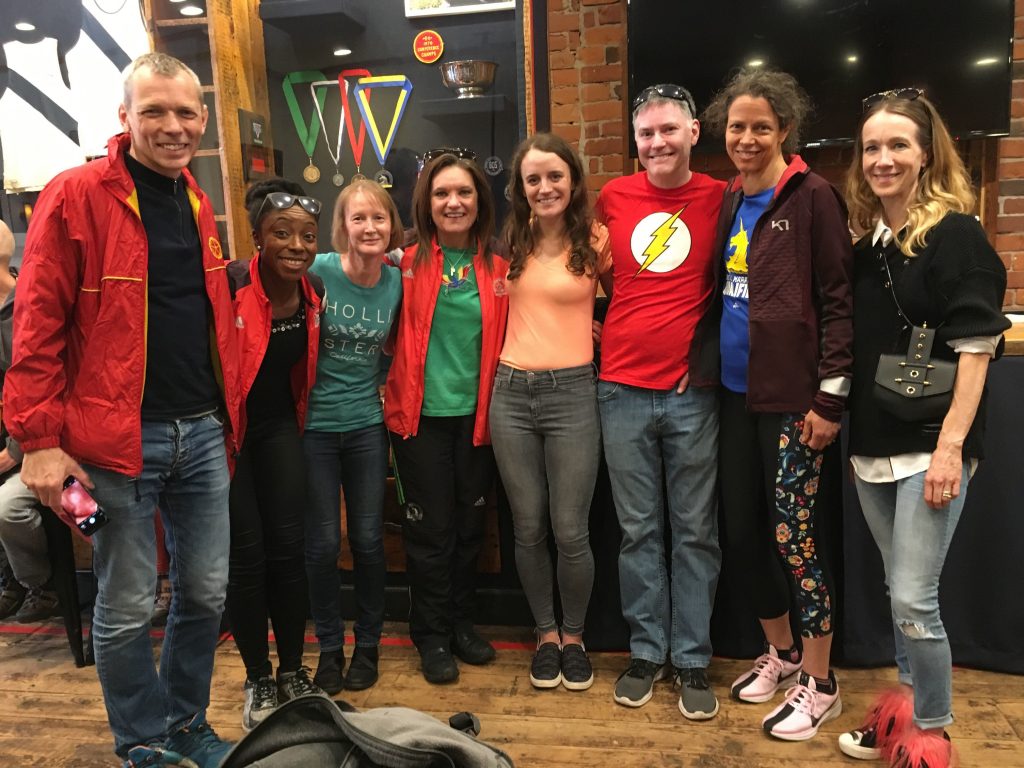 We also stopped by Tracksmith to say hello to Tina Muir and the Running for Real crew. I would need twice as much time in Boston to spend time with everyone I wanted to see. I was especially sorry to  miss seeing the Saltines, but another time! 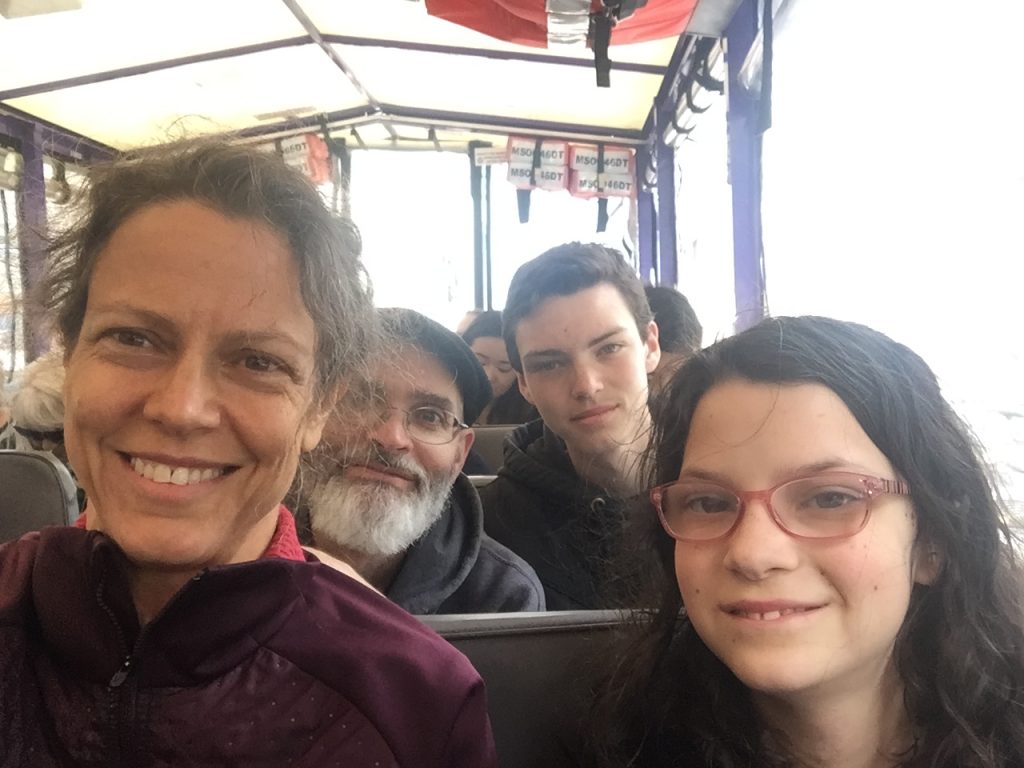 Sunday afternoon we followed the brilliant suggestion of High Power Running Mentor #1 to do the Duck Boat tour. As he put it – “Your kids will love it and you will get to sit down.” Rose even got to drive the boat. 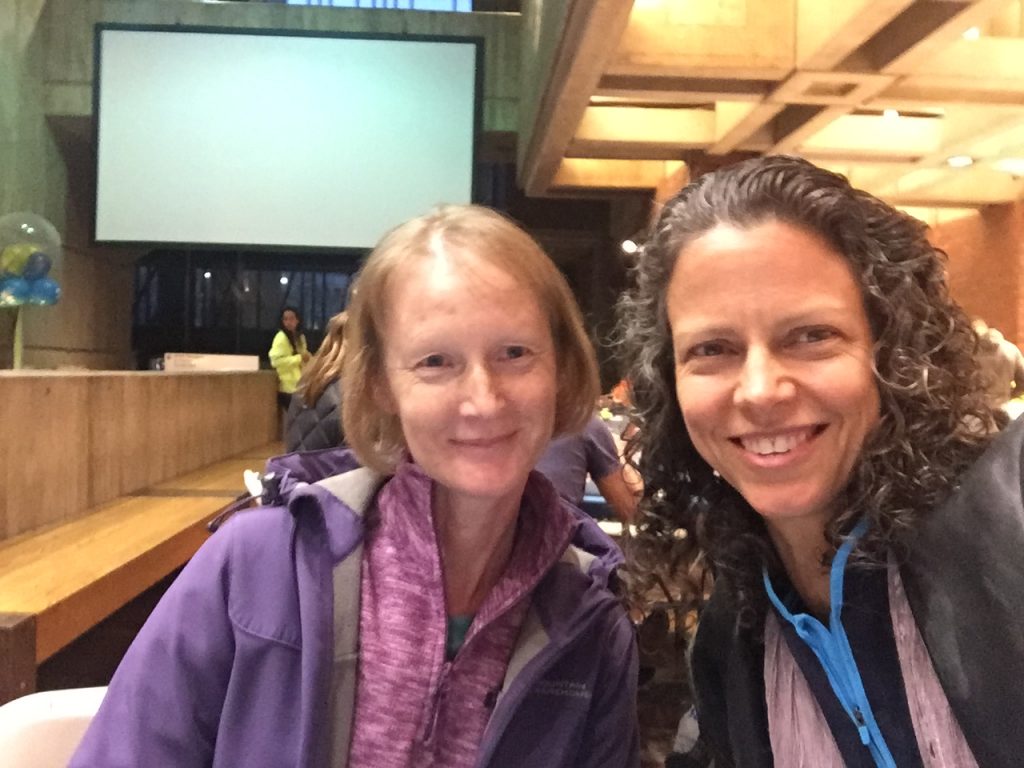 In the evening, we met Speedy Scotland from Running for Real with her family for the official B.A.A. pasta dinner. Aidan summed up this experience best: “That was really interesting. It was a long wait. They did an amazing job serving us once we got inside. The building was cool. The food was better than I expected.” Yes to all that – I’m happy we did it. I might do something different next time around.

One of the issues waiting in the long line for dinner is that it got pretty cold. The weather is always part of the story line at Boston, but it’s like the last few years, the weather wants to be its own character in the story. This year, it seemed to want to be an entire cast of characters. I try not to worry about weather much – I give Coach Mick that job – but I checked with about ten days to go, in case I needed different gear. At that point it was looking good, but with only a week to go, they started to predict a scaled-back version of the monsoon of 2018: lots of wind and rain, albeit with somewhat warmer temps. Then the temperature prediction also dropped. I bought three new jackets just in case (Not kidding! They are returnable!) and the weather turned again, now maybe getting warmer and possibly sunny? I would say, get your act together Mother Nature, but this is spring in New England and that’s how she rolls around here. Better in that case to be prepared, but not worried.

Which reminds me – for this race, I officially gave up taper crazies. Taper crazies, for the uninitiated, are the mood swings, aches and pains, and general antsy-ness that tapering runners subject themselves to. I use that wording deliberately. HPRM#1 convinced me last fall that this experience is optional. One might spend the taper period worried that one is going to come down with bubonic plague or that one’s foot is going to fall off. Alternatively, one might spend taper focusing on one’s mental preparedness for the race, reviewing the successes of the training period, and generally doing the psychological work that goes into increasing one’s confidence. Which approach is likely to make for a better race? So I had opted out of taper crazies, which meant I largely opted out of weather worry.

The night before the race, I touched base with both Coach Mick and HPRM #1. I had my race plan lined up – pretty much just aim for 8:35 pace for most of the race, adjust for hills and weather if necessary. That’s a 3:45 marathon, the time I had been targeting. We had some discussion about how fast to run the first 3-4 miles, which are downhill, but as heat started to look like a bigger issue than cold, Coach Mick advised banking energy not time, and that seemed the wise choice. 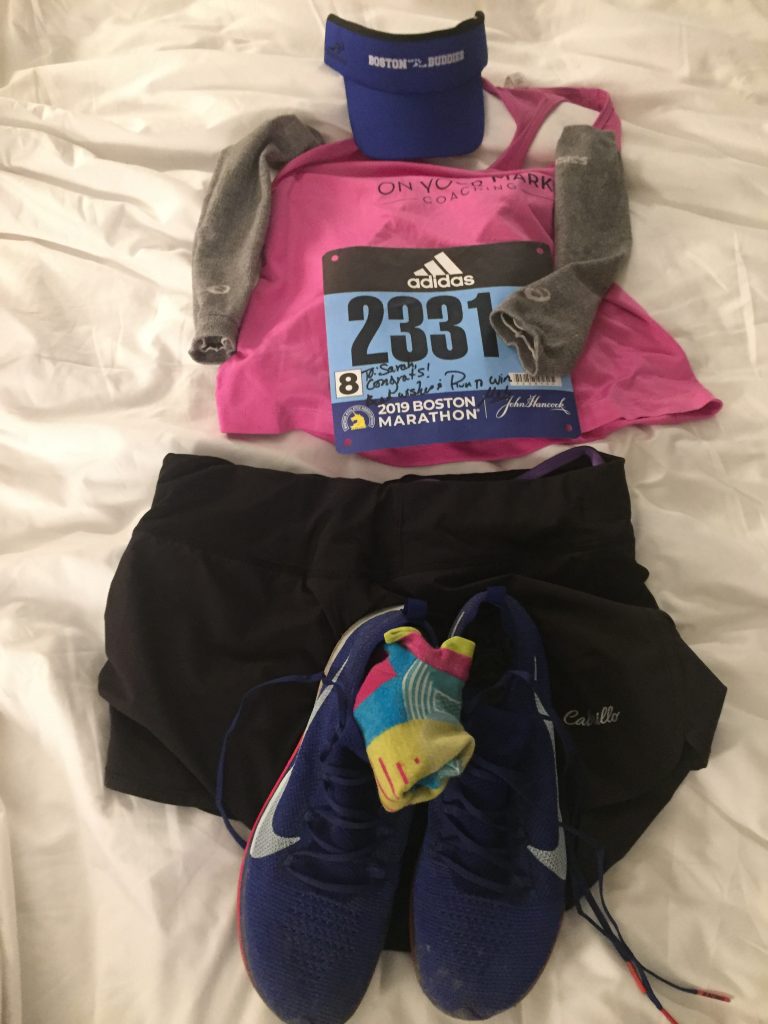