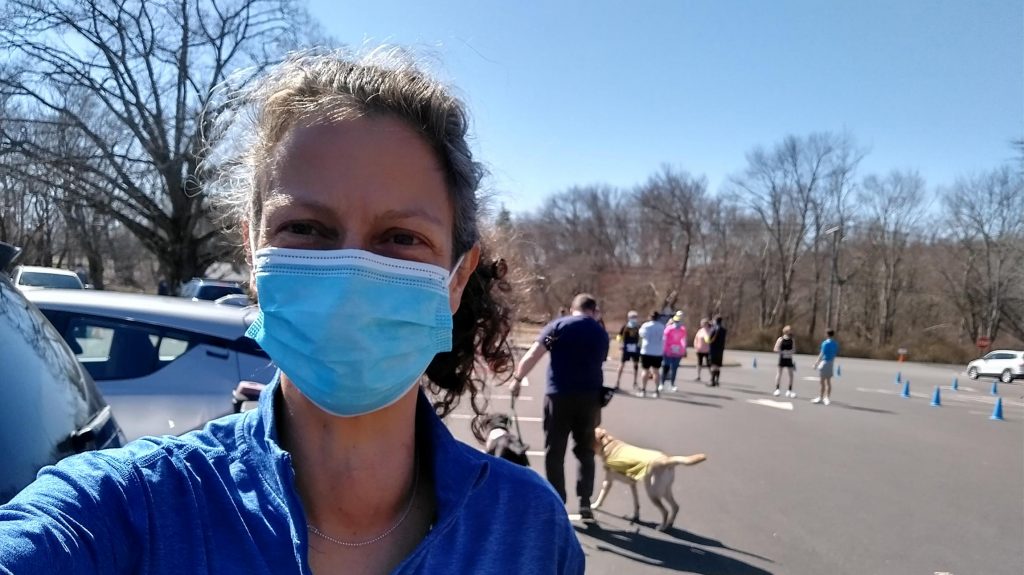 Make-A-Wish Bethany was the last of the three races I ran in March. It happened way back on March 21st, but then a whole lot of life happened, so I haven’t posted a race report yet. Here it is!

I learned about the Make-A-Wish race from runners in the 169 Towns Society. Members of 169 Towns are trying to race in every town in Connecticut so they keep careful watch on all races, even the tiniest ones. I’ve heard that the Make-A-Wish folks actually contacted 169 Towns and asked where to hold the 5K so that the most people would show up. Of course in this process I ended up joining 169 Towns so we’ll see how long *that* project takes!

After running a bit too slowly at the 3 Miler in early March and then starting way too fast at the Colchester half, I was really looking for good execution at the Bethany race. Coach Mick noted that starting a little hot was becoming a bit of a habit for me and maybe it was time to nip that in the bud. I completely agreed. He suggested putting a pace alert on my watch for the first kilometer so it would beep at me if I went too quick. I tried that on my Saturday shake-out run the day before the race and it sort of worked. The watch definitely beeped at me, but it was because I was running too slowly! Whether it was because I then tried to speed up to hit the pace alert from the too fast side or because it’s suddenly 50 degrees and sunny in Connecticut, the shake-out run felt pretty terrible. I felt gross. Running at noon is awful. I hated the watch arrangement. My Aftershokz died on me. The only thing I was happy about was having my trusty Next%s back on my feet. Possibly the worst shake-out run ever.

I talked to Coach Mick (again….) and he wasn’t worried. The plan was to break the race into kilometers, a technique I’ve used before. For the first kilometer, I was aiming for about 7:30-7:40 minutes/mile, and then drop it to 7:20 and hold there. My primary goal was not to start too fast. I wanted to run hard, but controlled. My secondary goal was to meet some of the 169 Towns people in person.

Make-A-Wish Bethany started at noon, which is a weird time for a race. At least I got to sleep in! I had a normal breakfast. I futzed around with my watch some more. I did a little work-work. Suddenly it was time to leave! I made a half a hippie sandwich and ate a quarter of it on the way to the race. The weather is *finally* warming up so I wore my pink Kari Traa singlet, my ancient Moving Comfort compression shorts and the Next%’s. Pink Manchester Running Company socks for luck!

The drive to Bethany was uneventful except mentally I was stewing about the Covid situation. I was set to get my vaccine the day after the race, but this weird phase of some people vaccinated, some not, not being quite sure what is safe and what isn’t – This phase can be tough. I promised myself early on not to get angry about who gets vaccinated when and how, because I think there’s a lot of good faith efforts going on. But I haven’t always been able to keep that promise. On the way to the race, I thought of Deena Kastor again: Define yourself. How do I *want* to handle the social aspects around Covid vaccination? I want to grant everyone grace and compassion, including myself. That means grace and compassion for everyone, from the person who “jumps the line” to the person who is too nervous to get the vaccine at all. Most of all to anyone involved in vaccine distribution. So a couple of miles outside of Bethany, I just imagined letting all my anger go and defining myself as someone with a big heart and a lot of compassion on this topic. I don’t know how long I’ll be able to stick with that position but I’m sure going to try.

I got to the race with about 45 minutes before start time. Picked up my bib and shirt. Bought some raffle tickets. The port-a-potty line was pretty long so I just bailed in order to have time to warm up. Running out along the course, I still didn’t feel all that great. My watch was again beeping at me for running too slowly. Then it started talking to me, telling me my pace! Screw that. I decided to just use the settings I am used to. Also, my headphones crapped out again. Not sure what is going on with them! I had just enough time for a few drills and strides and then it was time to line up. The first wave was everyone expecting to run under 25 minutes. I had told Coach Mick I was considering lining up at the start of the second wave and he assured me that was a bad idea. So, back of wave 1 it was. The 169 folks were *everywhere*. I chatted with the guy next to me for a minute or two and then we were off. 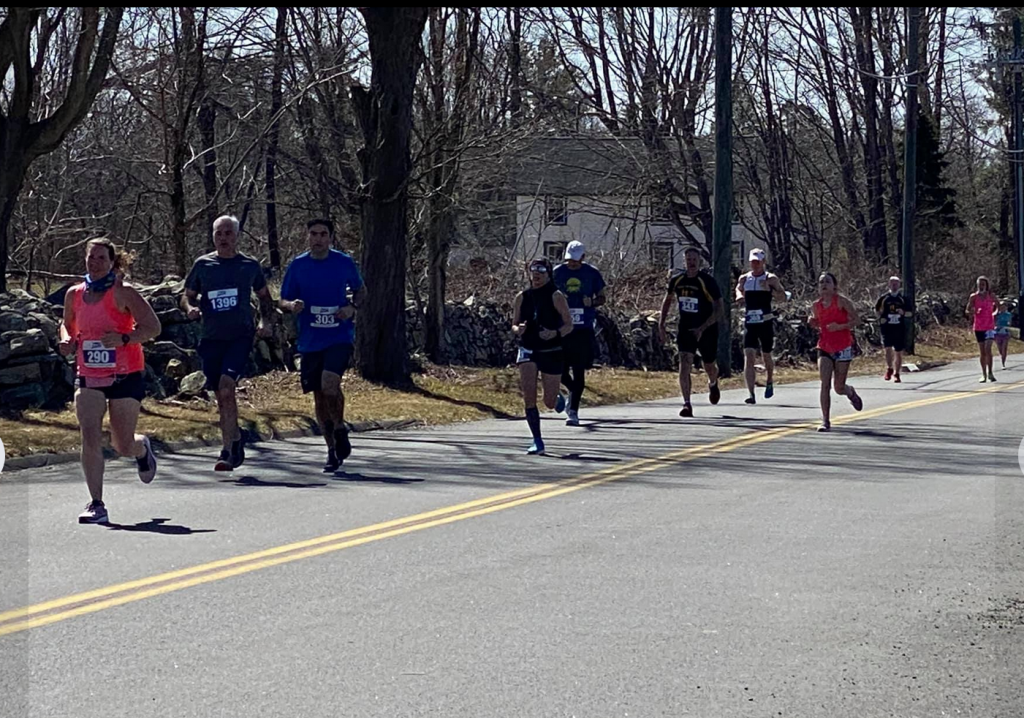 I’m the one in pink – pretty much all the way at the back!

I was determined not to start too fast, especially since I opted against the pace alert on the watch. I definitely did not want to tell Coach Mick that I had bailed on his suggestion and still screwed up by going out too hot. Not that he would mind, but I would sure mind! I let the entire wave pull away from me, even the nice 169 Towns guy I had been talking to. Some of them will be coming back to me, I thought. I hoped! I peeked down after a couple of minutes and my watch said 7:15. Cool your jets, girlfriend. You are looking for 7:35 at the fastest. I slowed down even more. My watch’s autolap was still going off at kilometers, but I saw the first mile marker at 7:44. A little slower than planned, but better that than too fast.

This is an out-and-back course with literally one turn. With one mile down, I was ready to take it up a notch. And I was feeling better! You never know what will happen in a race. I’ve been reading Alexi Pappas’s memoir and she starts with a poem: 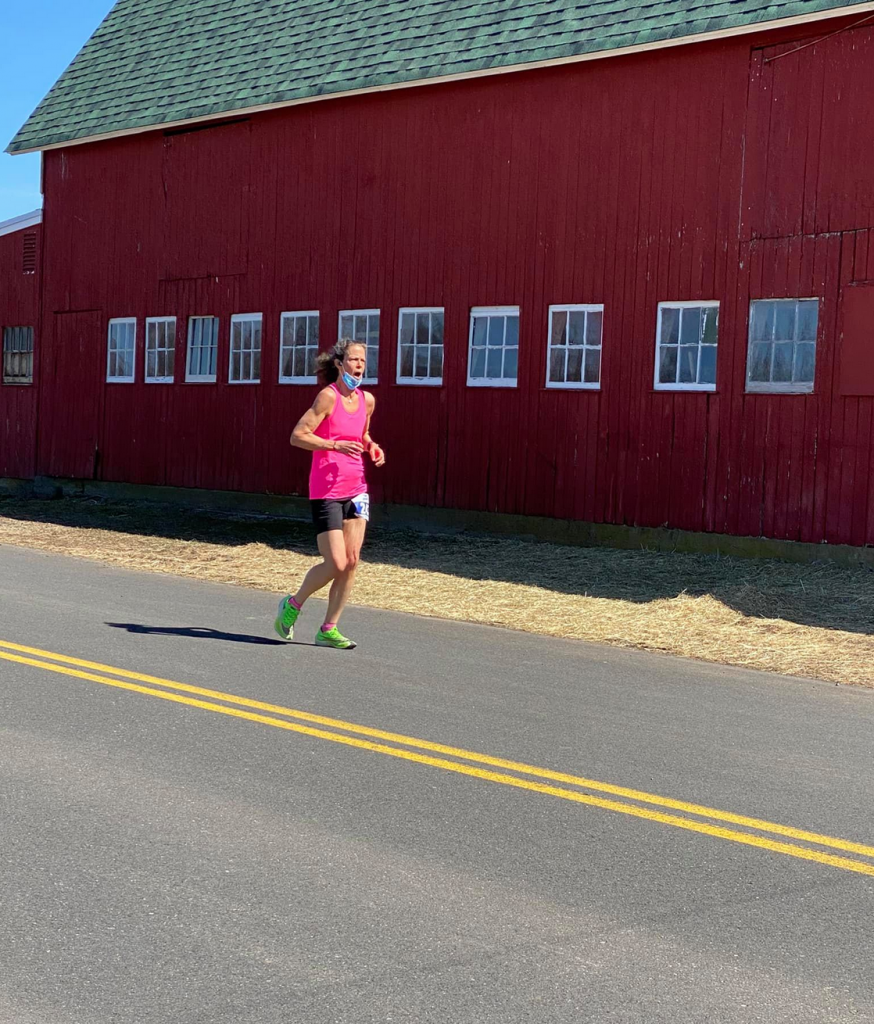 There is pretty much nothing interesting about this course. There’s one barn on it, pictured right here. One of the 169 Towns people snapped this. I love that these folks do not know me AT ALL yet they managed to take the exact same race picture that has been taken during so many other races. The Incredible Mervus calls this look “Zombie Fish.” Attractive, isn’t it? Note also, lack of knee drive and how my hips are collapsing. There’s work to be done!

I had thought up some mantras other than “replace can’t with maybe” but none of them came into my head now. Instead, I just chased a controlled 5K feeling. Yesterday in one of my running groups, we talked about whether you can feel joy when you’re racing hard, and therefore feeling miserable. I think you can. That’s what I was hoping for and I found it. At the 3 mile race two weeks earlier, I couldn’t figure out how to race hard. At Colchester, I was just miserable. At Bethany, I found that hard-joy feeling. It’s a little like what I imagine driving a sports car might be like except you pay for all your speed with oxygen.

With about a half mile to go, I spotted a woman ahead of me in green socks. I had no idea how many women were ahead of me, but perhaps not that many. What if she was in third and I was in fourth? Like, for overall female? How crazy would that be! And how pissed would I be if I missed third by a few seconds. I started to push harder. I was already counting in my head, but by now, I could hardly keep track of what number I was on. I tried to think about the form cues I’m working on. Mostly I just chased those green socks and counted down until this race would be over with.

I crossed the line and went and bent over a traffic cone to catch my breath. Oof. After a bit, the guy from the start also crossed and made a similar move with a fence. We both stood there, bent over breathing hard for awhile until we could finally stand up and congratulate each other. These 169 folks are really great and we had a fun talk. Then I went and said hello and thank you to Green Socks for pulling me through at the end! 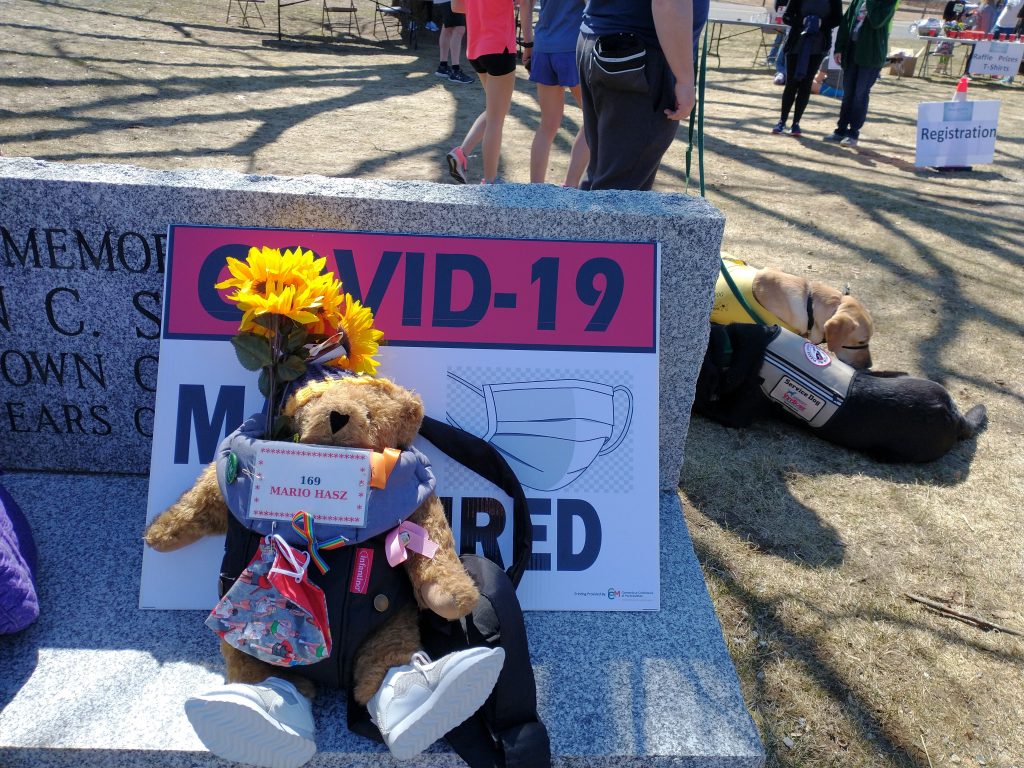 I met the bear who the 169ers carry along at every race to honor a friend who passed away. 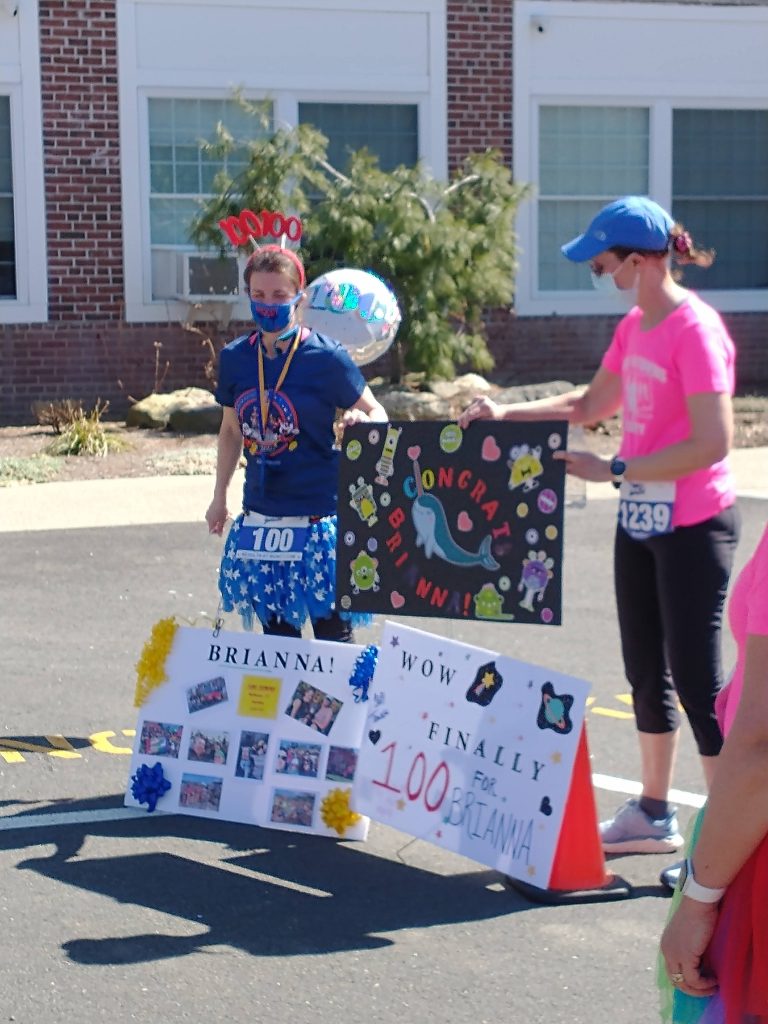 I watched an award ceremony for someone who has completed her 100th town. I stood in the sunshine and talked running with a bunch of new friends. I may or may not have consumed a jello shot. So much joy! And, because these things matter to me: 23:08 for my time, 6th overall female, 1st in age group. No award for running, but I did win a $25 gift certificate for ice cream in the raffle!

After the race, I cruised home to pick up Mervus to celebrate. We had pizza and beer at a local brewpub. Yum! No mimosa, but I’ll take one of these stouts any day! 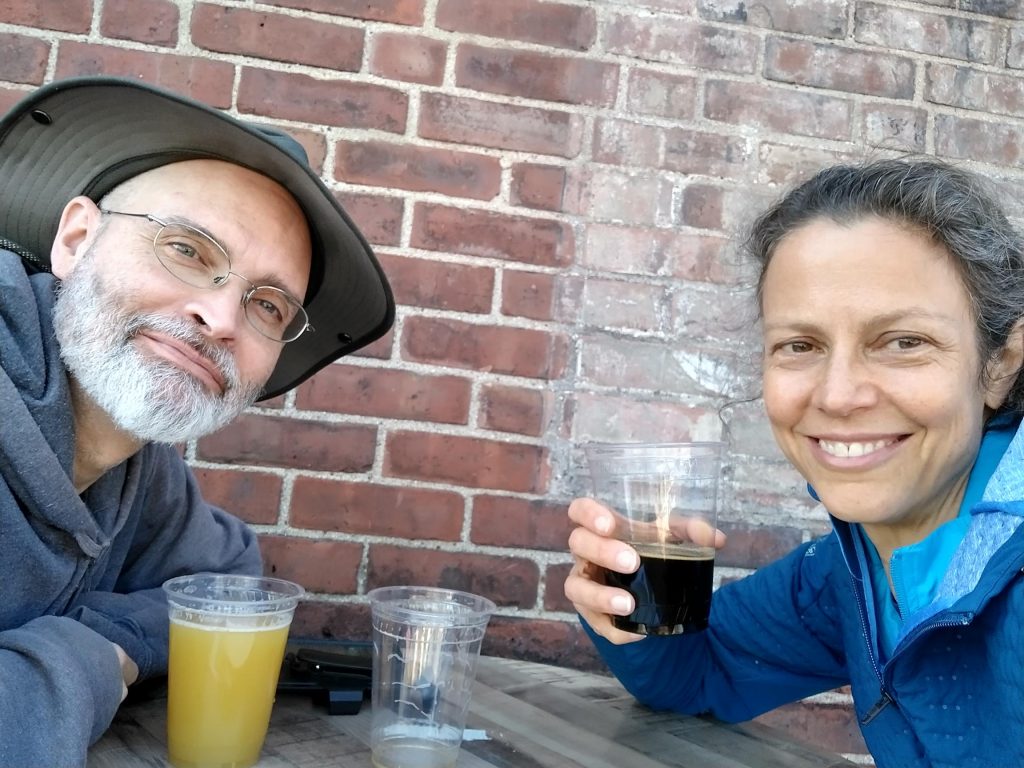 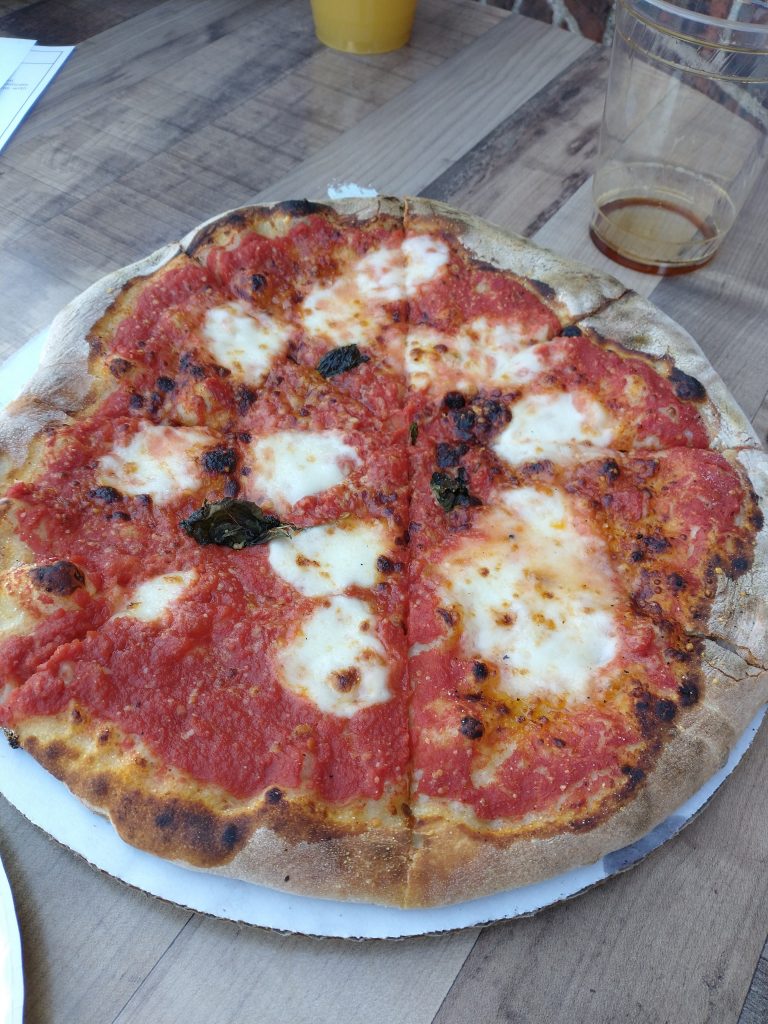