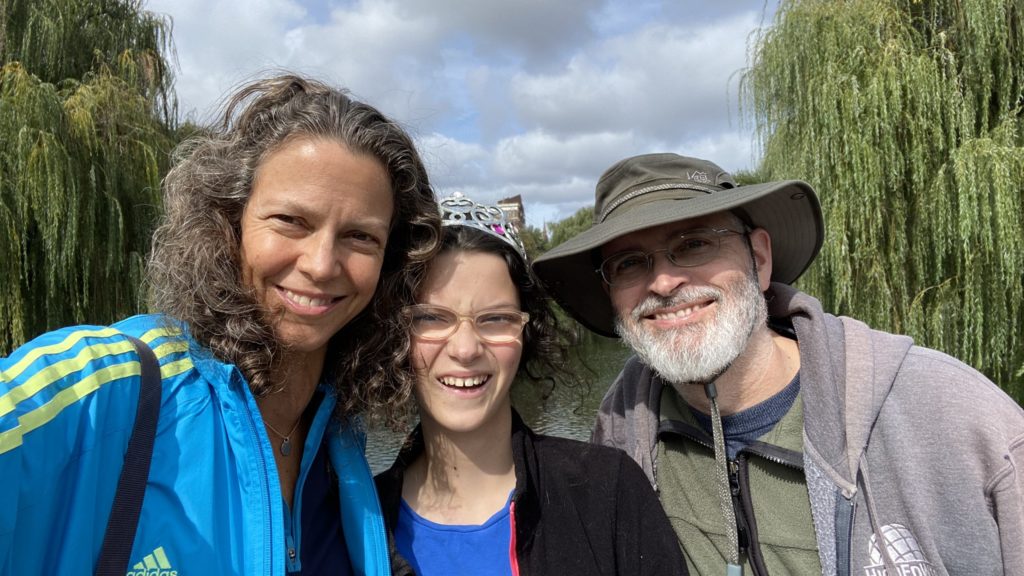 Boston 2021. It’s taken me a long time to finish this race report, so it’s kind of old news at this point. But I write these things primarily for myself and it turns out, I need to finish this one, so here goes.

I’ll start like I usually do – why this race and how did training go? The Berlin marathon was my goal race for the fall, no doubt about that. But when Boston registration opened, I was immediately tempted. The hype around Boston is irresistible! Then I saw this year’s jacket, which is gorgeous. Then a local acquaintance made a comment about how I “could always run it virtually” – because he apparently could not imagine I had a qualifying time (of over 10 minutes, actually). That comment got under my skin. Anyway, I had already signed up for Berlin as my bucket list race, and Wineglass as my back-up race, so what’s one more marathon registration? I signed up for Boston too and got in! It took a long time for the situation in Berlin to clarify and I was grateful to have Boston as a “back-up” – which felt pretty dang weird.

Ah, Diamond. My soul sister who I met in person at Boston 2019. Being so focused on Berlin, I had not really done a lot of logistical preparation for Boston. But when I asked, she kindly offered to let me crash in her hotel room. THANK YOU! Lucky me, getting to spend almost the entire weekend with this amazing friend!

I have no idea how to “train” for a marathon two weeks after a marathon, but luckily that’s why Coach Mick is in charge. Everything I read about attempting this bit of insanity emphasized that recovery is much more important than anything else and that sleep is the best recovery. So I trained for Boston by trying to sleep as much as possible. Otherwise, I did some hiking and swimming, a few easy runs, and one set of 4x1200m at tempo effort the Wednesday before the race. The farthest I ran was about 6.5 miles. 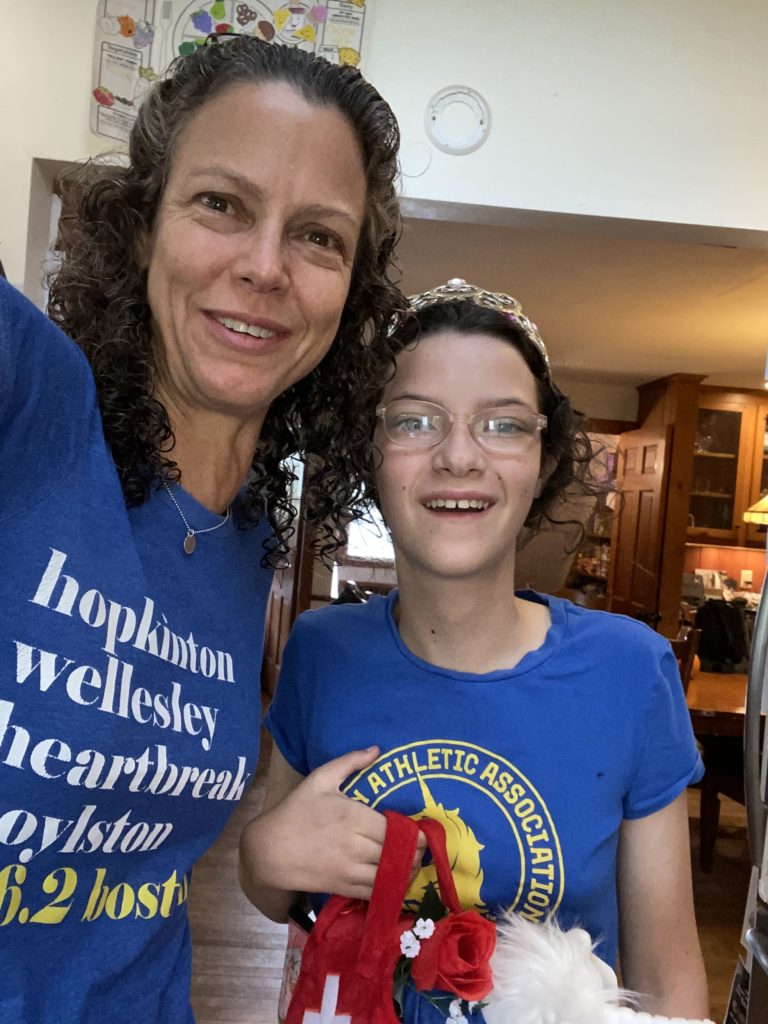 When I ran Boston in 2019, we turned it into a family affair, but I knew that wouldn’t work this time around. Still, Rose and Mervus came in for the day on Saturday. Rose really loves Boston and the Boston marathon so I wanted to make a great day for her. Plus, she’s become a huge fan of the TV series Cheers so she had her own big goal for the weekend. Visit Cheers! 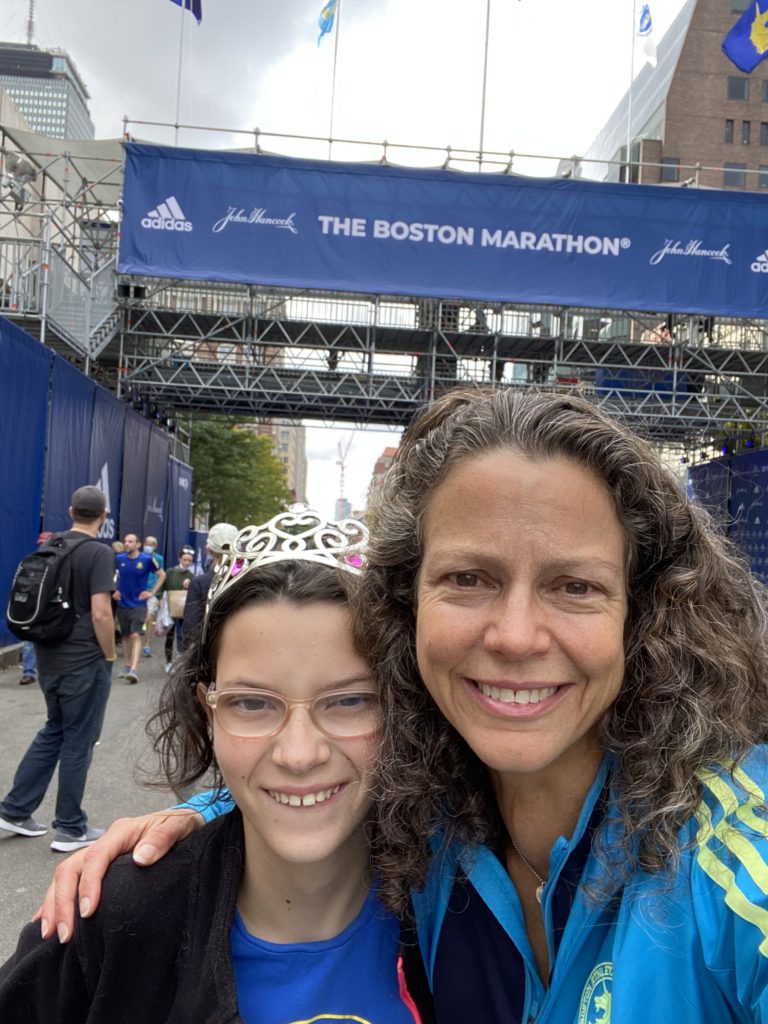 We arrived just before lunch on Saturday. While Mervus picked up our food, Rose and I went to get my proof of vaccination bracelet. Suddenly the finish line came into view. I immediately teared up. The Boston finish line is sacred ground for runners. When the race organizers repaint the line, they post it on social media. Superstition says if you are running the marathon, you should not step on the finish line prior to the race. More than anything, the finish line was proof: We were getting our race back. As Neil Diamond says in Sweet Caroline: So good! So good! So good! 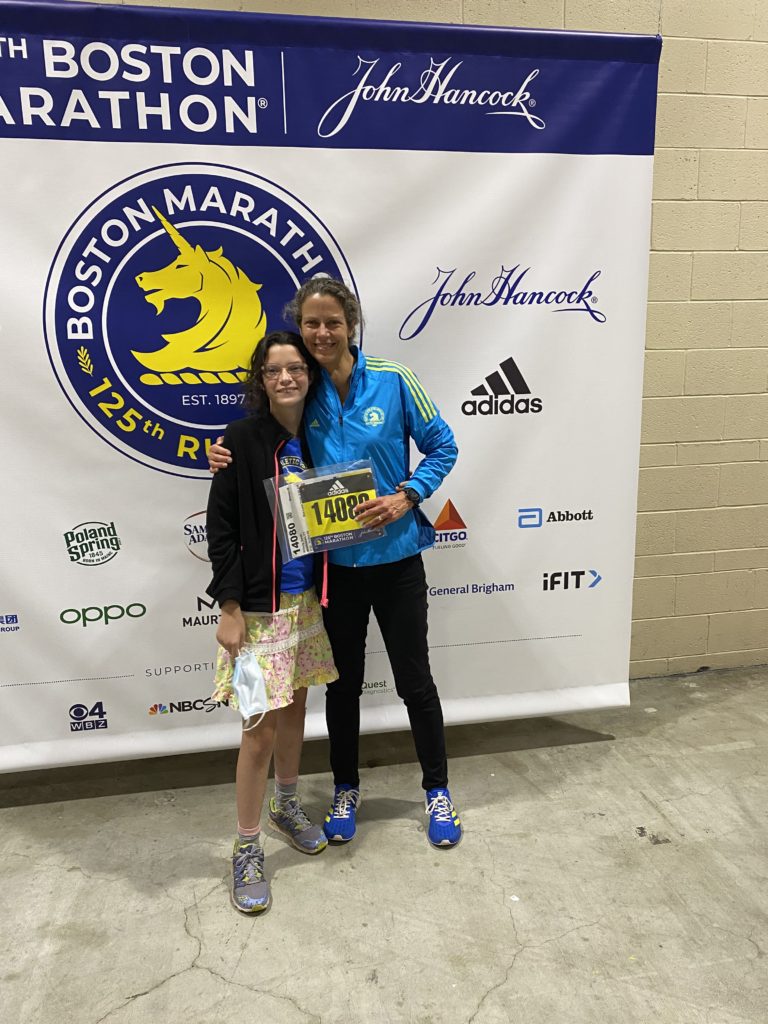 The vaccine verification was quick and easy. Mervus had our food by the time Rose and I got back. We had a picnic lunch in the Public Garden with the 45s, a group of some of my good running buddies. So fun to catch up with everyone in person! Then we hit the expo. It was soooooo much smaller than in previous years, but we had been warned about that. We still got some good pictures and some merch, of course!

Lastly and most importantly, we went to Cheers for dinner. In 2019, we met up with the Boston Buddies at Cheers and Rose loved it when the gang cheered for a friend as she walked in the door. Just like  when “NORM!” shows up in the bar on the show. I was a little worried that dinner and a gift shop might not live up to her expectations, but boy was I wrong. I think she took a picture of everything in the bar and she loved the “Clam Chowda.” After dinner, it was time for Mervus and Rose to head home and we said good-bye near the Boston Commons parking garage where we had parked. Oof. It was really hard to see them go. But I met up with Diamond and a bunch of running friends at Trillium and that helped a lot. 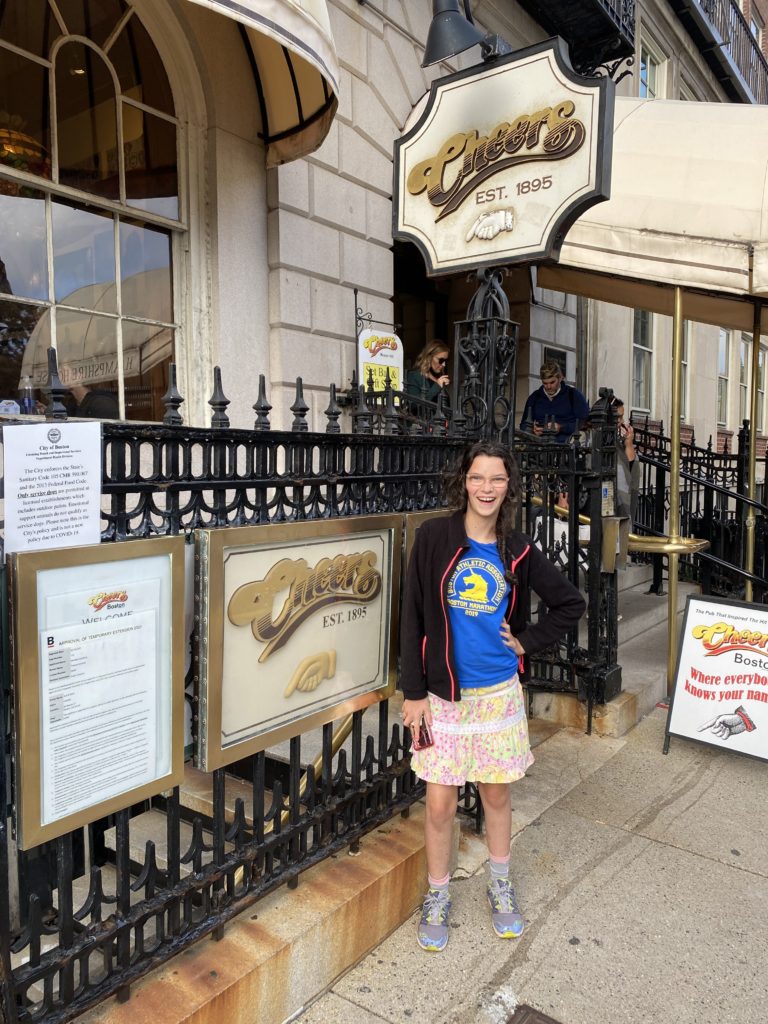 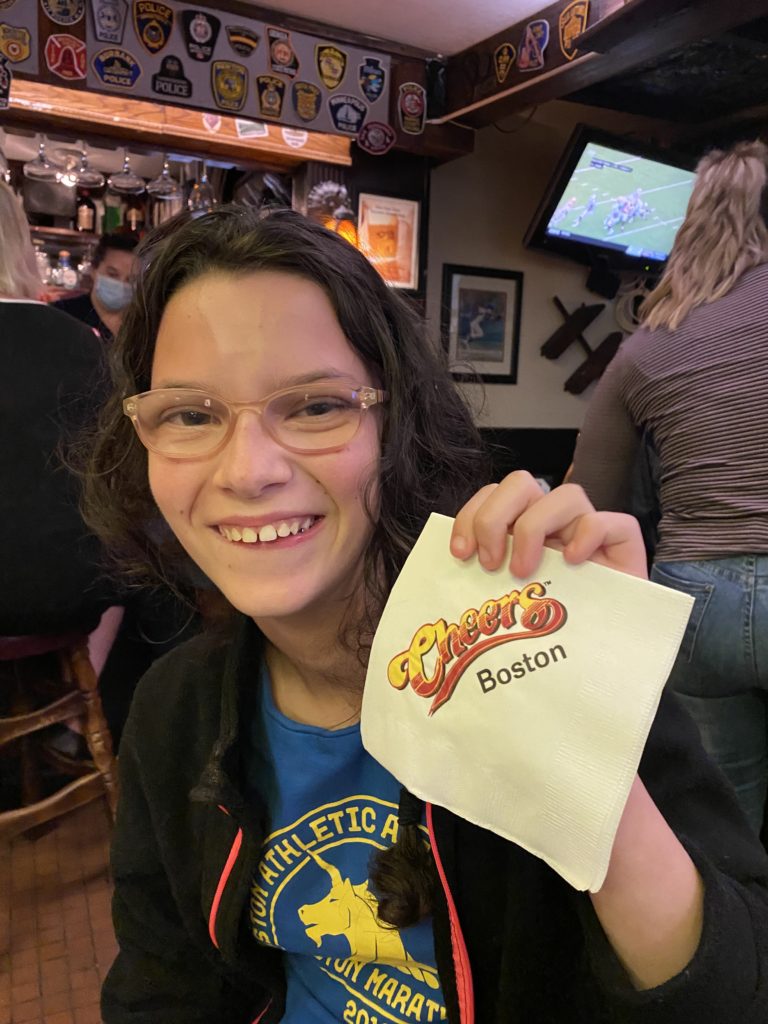 Diamond – how to describe her? She said it best in her race report. We met online in the lead-up to Boston 2019. Our BQ times were identical and it turned out we had sequential bib numbers. She’s a butterfly chaser and a dog-petter who finds joy everywhere. I’m an analytical over-thinker. But somewhere underneath all that stuff, it’s like she’s the sister I never had. Such joy to spend the weekend together! 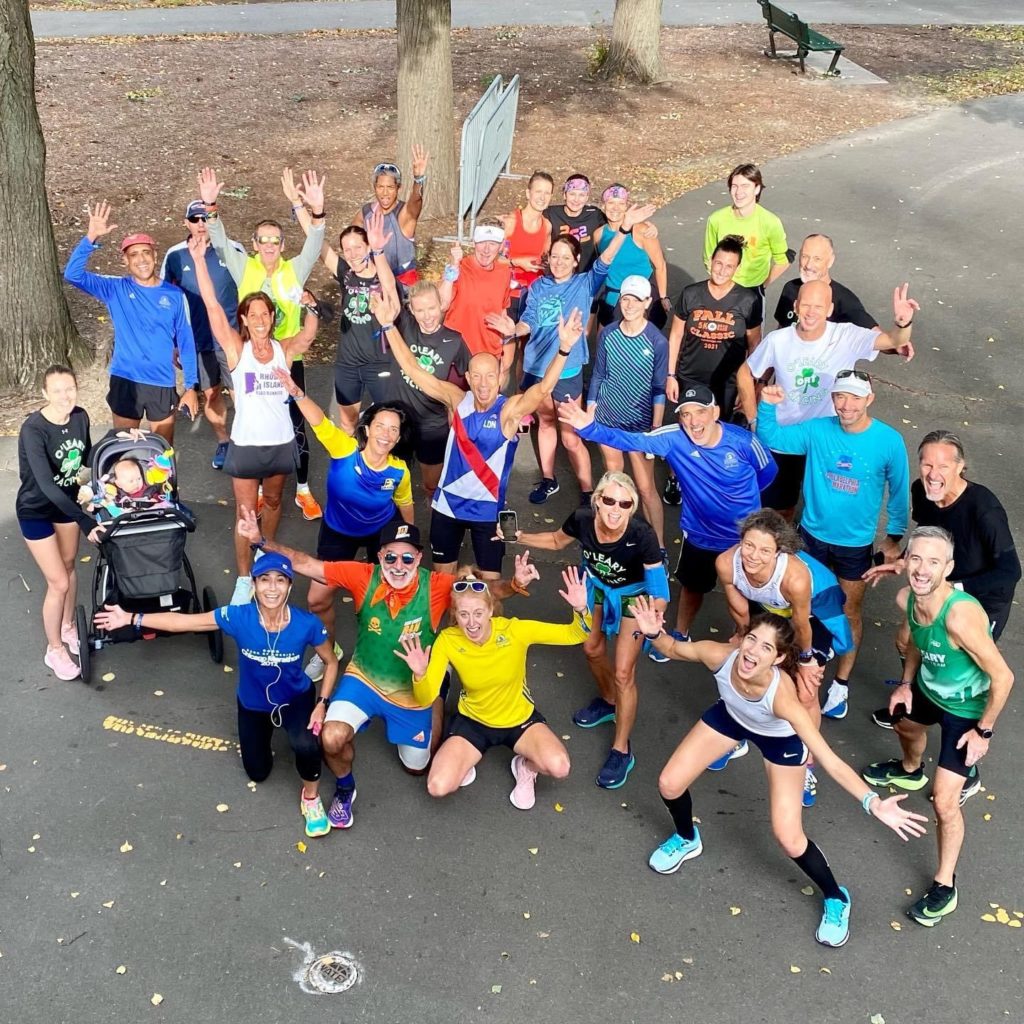 We started Sunday with a shakeout run with her coaching group. Three and a half miles or so around the Charles River, and the chance to greet some old friends and make some new ones. 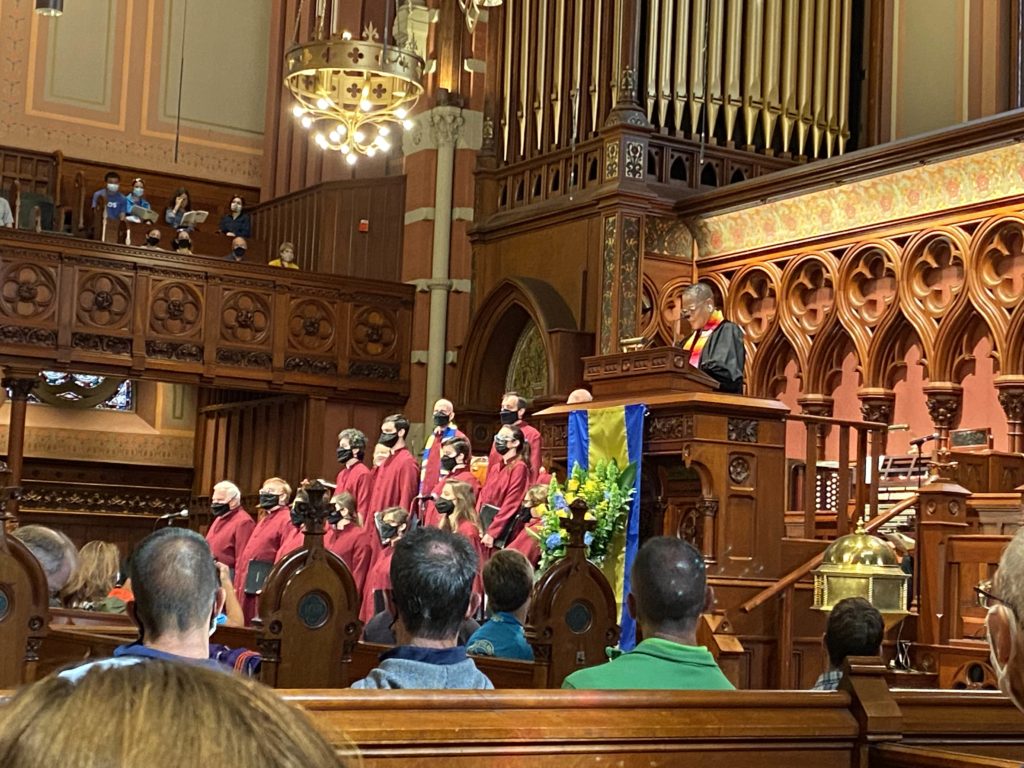 We finished on time for the main event of the morning, the Blessing of the Athletes at Old South Church. Diamond and I attended this service together in 2019 also and it’s a highlight of the weekend. For Indigenous People’s day, they started the service with a Nipmuck song. Then the sermon was about how Jesus asks us to welcome strangers. The city of Boston must have got a heads up on that message because everyone was SO welcoming. The man who started the service explained that the race travels from Nipmuck territory to the territory belonging to the Massachusetts tribe – knowing that felt so integrating and good.

After church, we made our now-traditional outing to Finagle-A-Bagel, Diamond’s favorite Boston food source. Then a “quick” [??] stop at the New Balance store for yet more Boston gear and back to the hotel to chill. I am happy to say there was no last minute bib correction necessary in Boston and I did a much better job relaxing on the day before the race. We had an early dinner at Maggiano’s with the Ginger Metronome and friends. I even ran into High Power Running Mentor #1 on the street while fetching some snacks at CVS!

We were back at the hotel by about 7pm, which was perfect. Diamond and I agreed that extra-early dinner pre-marathon is the way to go. We spent a couple of hours snacking, watching the course video, laying out our flat runners, talking to our families, trying to avoid getting too nervous. Lights out just after 10pm, which was great because we didn’t have to wake up until 7am. 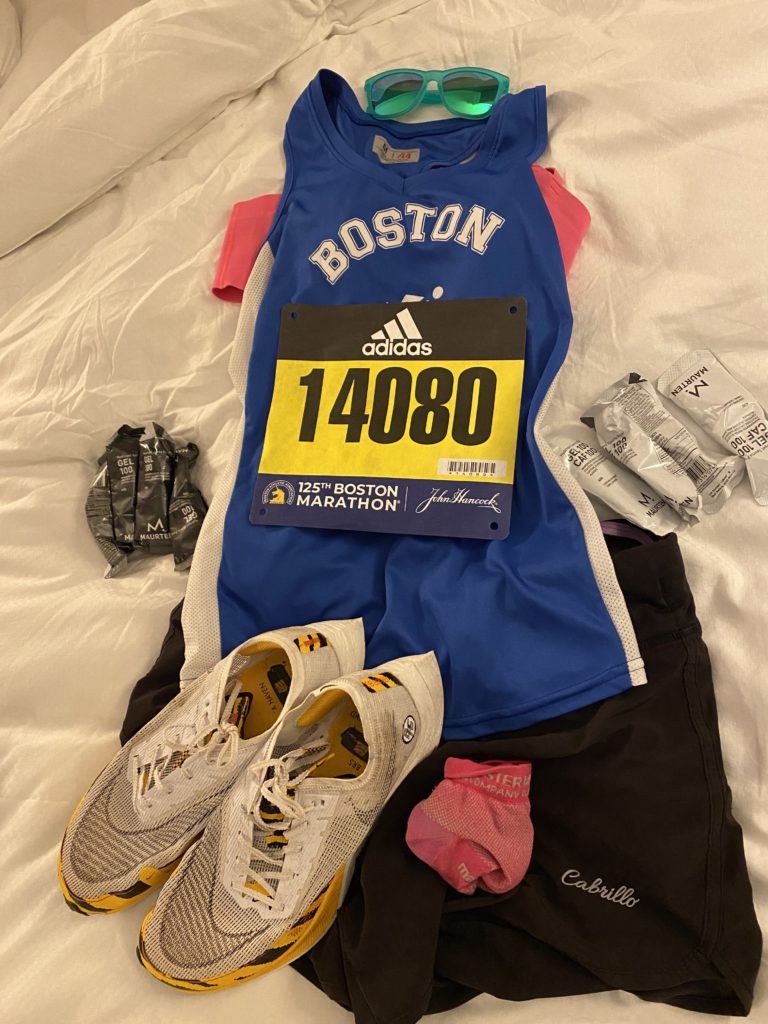