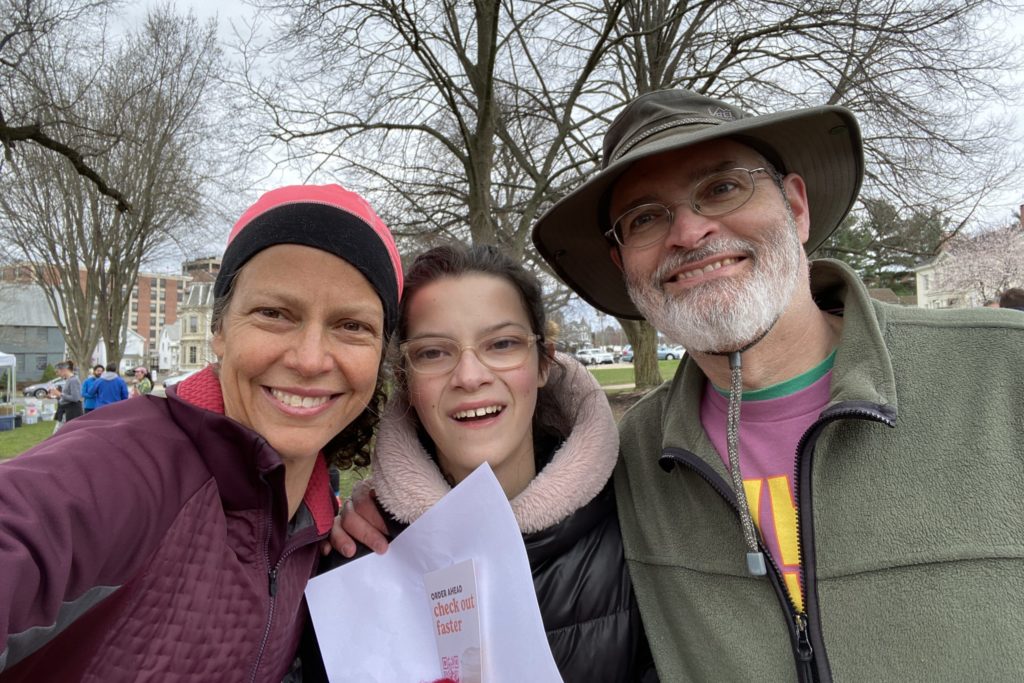 I’m very keen to post a race report for Boston 2022, but that story is not going to make a lot of sense without some background. Since October Boston 2021, I’ve posted exactly twice: Once about a double loop run at Lyman and once about the Run for Refugees 5K. There’s a lot to catch up on!

The biggest change is not working with Coach Mick anymore. Coach Mick is an incredibly dear friend and I think he will always be what I call the “coach of my heart.” Maybe I will call him Coach Emeritus. In any case, by late fall 2021, it was time for a change. I had started working with a new coach at the end of November, but it didn’t work out. I learned a lot from him, but we were not a good match. We parted ways in mid-February, about nine weeks before Boston. I decided to finish the Boston training cycle with a plan from a friend and advice from Coach K. 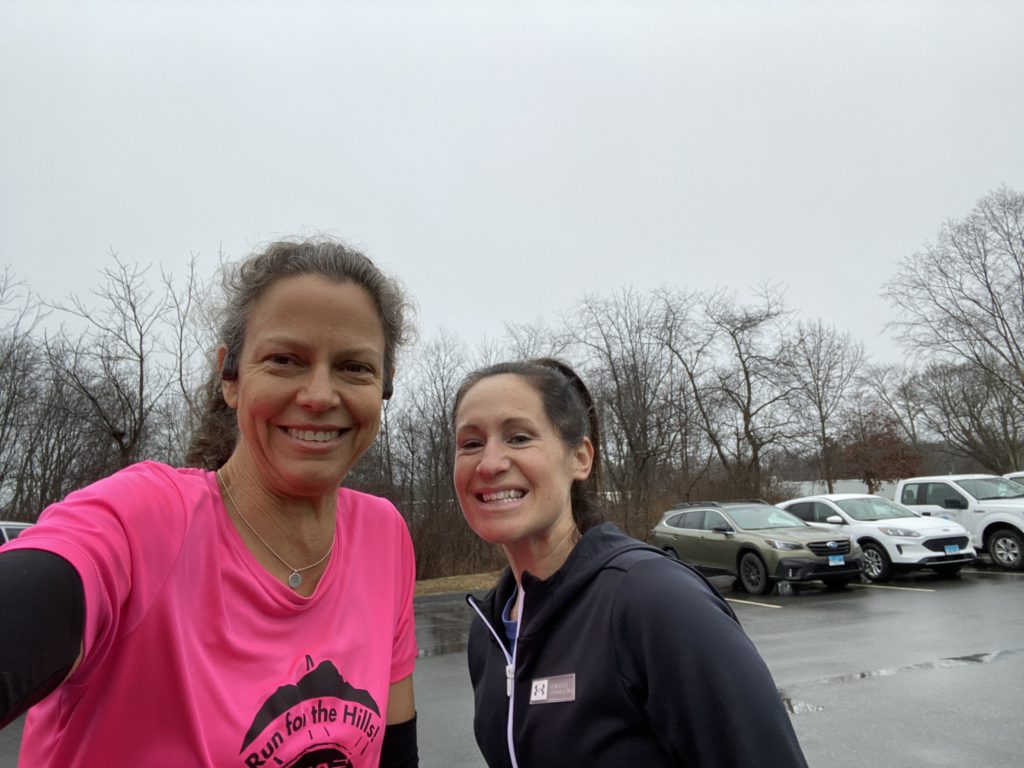 That sums up the coaching changes, but there are a couple of races and a significant side project to talk about. Pokey and I were able to return to our New Year’s Day tradition of racing the Colchester 5K. I stayed up until 1:30am New Year’s Eve, eating enormous quantities of cheese and chocolate fondue, and drinking not-small quantities of champagne. I should *not* have been surprised to run my slowest 5K in years (26:09), but I sort of was. Most aspects of the Colchester 5K were delightful. Pokey and I always have fun together and this race was no exception. It was great to see her! It also marked the first time I got in a car with someone I wasn’t related to without a mask and without really thinking much about it.  I saw Fast Friend running with her daughter and I went back out on the course and ran them in. I actually checked all the boxes on my list of pre-race preparations. Pretty much everything about the race was great, except my time, which was a real wake-up call.

After six weeks of actual training (funny how that works), plus a much-improved pre-race fueling and hydration plan, I raced the Run for Refugees 5K on February 13th and ran 24:02. After that race, I transitioned to the new training plan. I loved the new plan! But…..more miles, more intensity, bitter cold, somewhat worn-out shoes, inadequate recovery, bad luck…..can anyone guess where this is headed? The following Saturday, my anterior tibialis flared up during my long run and I had to cut an 18 miler short at 9 miles. I was able to see the Maestro, my amazing physical therapist, the very next day. He did some dry needling, provided some general TLC, and gave me some new exercises. I transitioned to pool running, regular swimming and spin biking. Nine days later I was able to run pain-free. It really pays to have a support system in place to address an injury immediately.

Speaking of that support system, probably the best thing I did this spring was seek out the help of a sports psychologist. High Power Running Mentor #1 had advised me to do this last fall and, he was right, as usual (as much as it pains me to admit it). Most people in this blog get goofy nicknames, but Aisyah Rafaee would like to be found so she can help other people. I’d like her to be found too, because she’s amazing. Here’s her email: arafaee@springfieldcollege.edu

Runners know that running, life, and identity are often deeply connected. The pandemic took a toll on lots of people, including me. I was angry, actually often furious, and also somewhat lost. Whether or not that anger was justified, it wasn’t healthy and it wasn’t helpful. Aisyah helped me figure out how to put it aside. She also helped me regain some of my confidence in running and racing. That’s still a work in progress and probably always will be, but it’s also the biggest win of the spring training cycle.

Two weeks after the anterior tibialis issue cropped up, I ran the Gate River Run 15K in Jacksonville, Florida. Pain free! I didn’t end up writing a race report for the Gate River Run, mostly because life just got too crazy. But I also felt in a weird place with my running. Coaching switches. An injury right before the race. Head maybe not quite in the right space. A few highlights of the race include hanging out with Diamond and her girls before the race and seeing Galen Rupp come out of a porta-potty right before the start. The race itself – well, moving from 5 degree weather in Connecticut to 65 degree weather in Florida doesn’t do one’s performance any favors. I was nauseous almost the entire race and any time I tried to run faster, I felt sure I was going to puke. I decided to stick with my lifetime no-barfing streak. I was incredibly grateful that the anterior tibialis issue didn’t flare up at all with the race. I ran 1:22:31 (an 8:53 pace per mile). That’s something like 5 minutes slower than my PR, but I took some good things away from the race. Mostly I remembered that I know how to fight when it gets hard. The top 10% of finishers at Gate get a special hat and OF COURSE, I desperately wanted the hat. When I got to the big bridge in the last mile, I focused on passing as many people as I could to beat them to the hats. I got one! 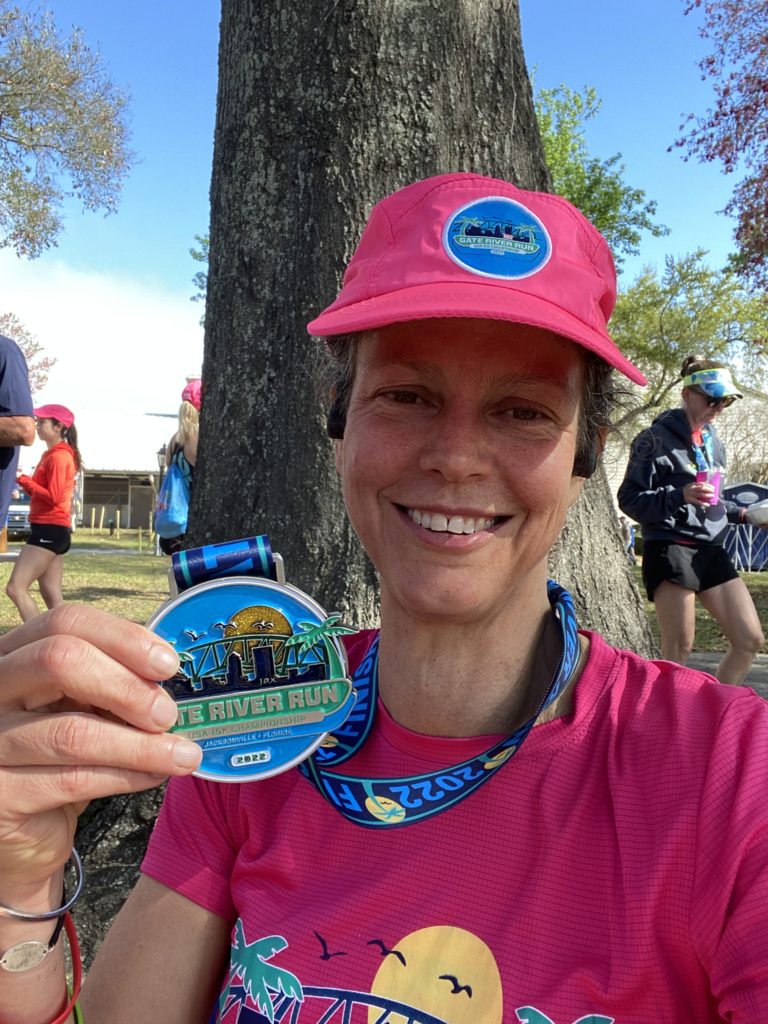 The rest of the visit to Jacksonville was spectacular. I stayed with Coach Mick and his wife. I got to see a lot of friends. We spent a day playing tourist in Saint Augustine. A fantastic mini-spring break getaway. 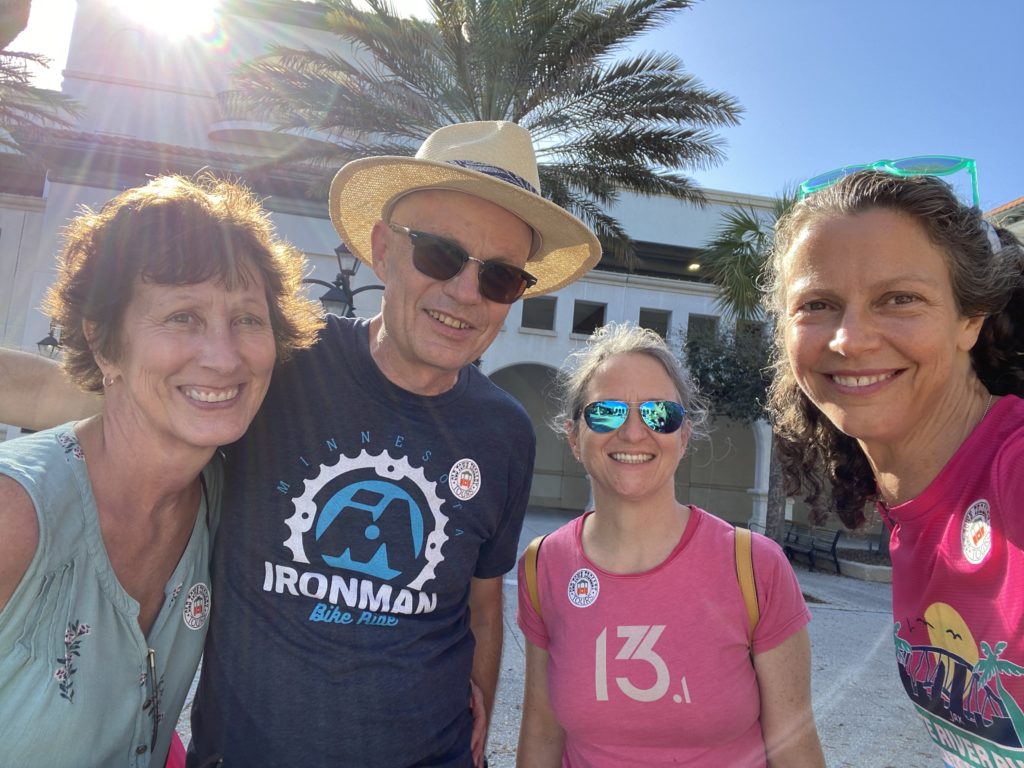 Back in Connecticut, I got a couple more weeks of training under my belt. The Librarian and I did a solid 20 miler together, finishing in a whirlwind of sleet. The weather was atrocious, but we hit our planned marathon pace miles! 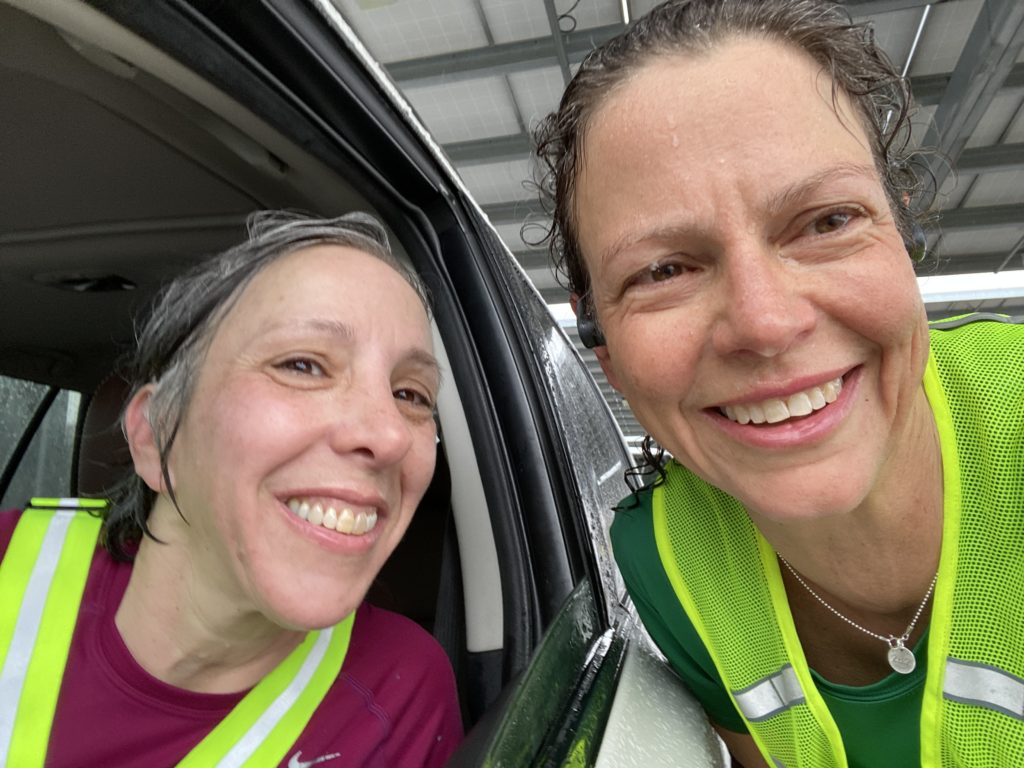 I had been planning to run the New Bedford Half on March 20th, but I almost bailed on it. With the switch in training plans, the injury, the Gate River Run – it was feeling really hard to build momentum. I considered staying home and focusing on training. On the other hand, as High Power Running Mentor #1 put it, having a not-great race is not a very good reason for racing less, and might be a good reason for racing more.

Ultimately, I decided to race New Bedford and I’m so glad I did. I had a couple of friends also doing the race and it was fun to hang out with them. Mervus and Rose agreed to come along to cheer and we had a great day. I really enjoyed the course and New Bedford has some great brewpubs plus a bakery at the finish line! I’d be happy to do this race again. I ran 1:52:28 (average pace of 8:35 – almost 20 seconds a mile faster than at Gate and for a longer race. Weather matters!). 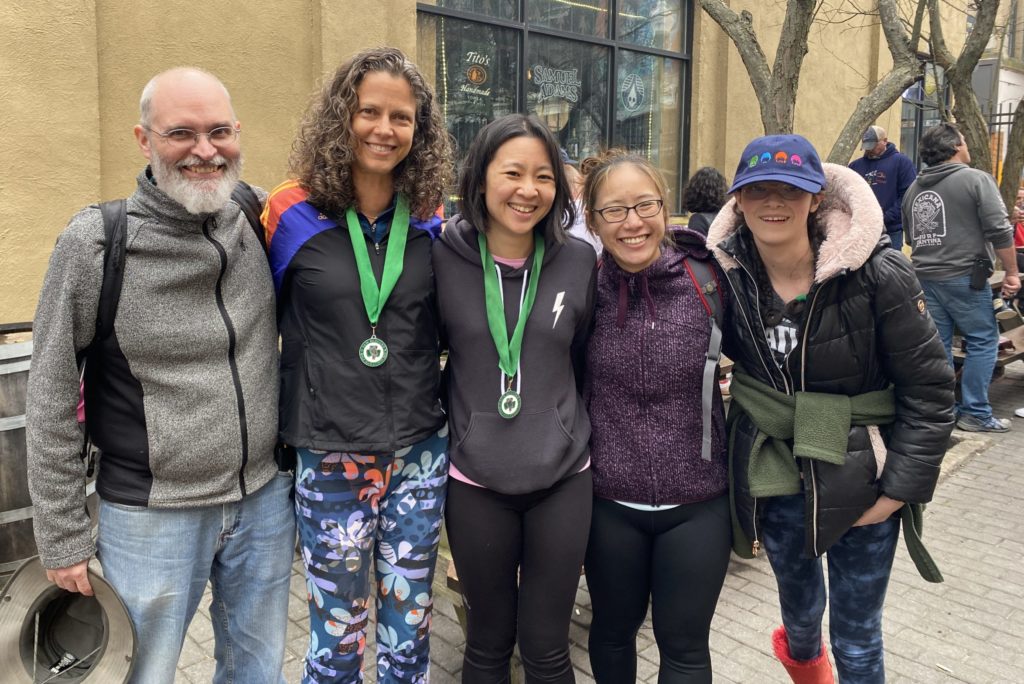 The best thing about New Bedford wasn’t my time, though. It was miles 7 through 10. Those miles are on the waterfront and it was very foggy. I could only see about 10 to 20 feet ahead of me so I just stared at the yellow road dividers and the cones they had set up to keep the runners separate from traffic. Something about the fog and the lines clicked something in my brain and I fell into what I have to describe as flow state – my world narrowed to those yellow lines and the movement of my body. I was working hard, but I felt completely calm. Everything in my world was as it should be. I’ve been able to find that state of mind before when running, but not in a long time. I just relaxed, did not look at my watch or worry (much) about pace, and focused on holding onto that feeling for as long as possible, which turned out to be about three miles. Then we turned away from the water, the sun burned off the fog, and everything felt difficult again. But those three miles were worth an entire season of running. My mind grabbed onto that feeling and I was able to get back there on the marathon pace miles of my long runs in the following weeks. It wasn’t easy, but with Aisyah’s help, I developed (and re-discovered) a series of mental tools that I can use on race day when things get hard.

I did one more race this spring – the Middletown 5K. I walked with my family to support Gilead Community Services, a local mental health organization. I had the honor of serving on Gilead’s race committee this year and we held our post-race meal at First Church. You can tell from the smiles in the top picture that it was a great day!

That’s where things stood with my running heading into Boston. A strange training cycle, but ultimately a turning point.