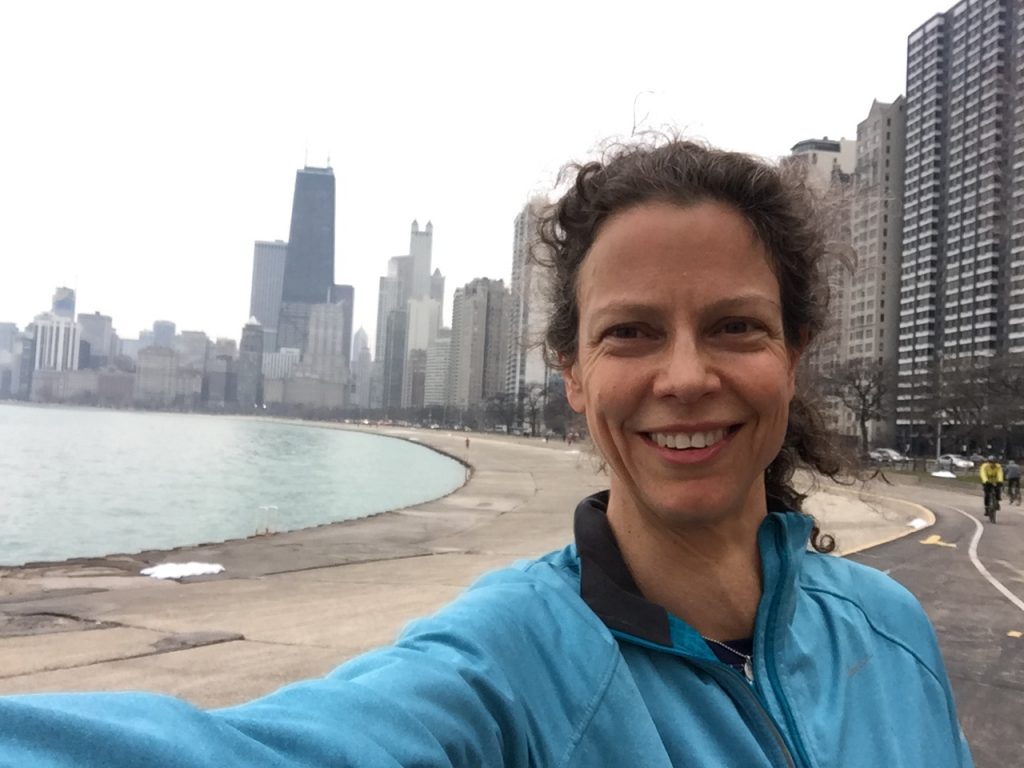 Kind of a funny thing to be looking for at a race called the “Bunny Rock 5K” but life is funny sometimes.

After recovering from plantar fasciitis and having my best marathon training cycle ever, I got hit with high heat and humidity for the Donna marathon in February. I know bad weather is always a risk and if you can’t stand the heat, stay out of the kitchen. In other words, if you can’t stand to have your race plans ruined by bad weather, don’t run marathons, blah blah blah. It’s still pretty much of a bummer to train for months and then have your race go badly.

The evening after Donna, High Power Running Mentors #1 and #2 (a.k.a., the Chicago Boys) sent me pictures of the drinks they were toasting me with and we cooked up a plan. We had already arranged to meet in person during an upcoming work trip of mine to Chicago and of course, we planned to run. Now, they decided, we should find a 5K, and I should get myself a shiny new PR at a shorter distance. HPRM #1 quickly came up with the bunny race and also volunteered his services as pacer. It turned out Coach Cupcake was going to be in Milwaukee that weekend and she could also come down for some fun and the race!

The three days in Chicago were a smashing success. Facebook sees the pictures of me running on the lake shore and eating incredible meals. Meeting with colleagues, old and new, coming up with new ideas, making intellectual connections – these aren’t things that make good photographs, but plenty of that occurred as well. I packed an awful lot into just a few days. 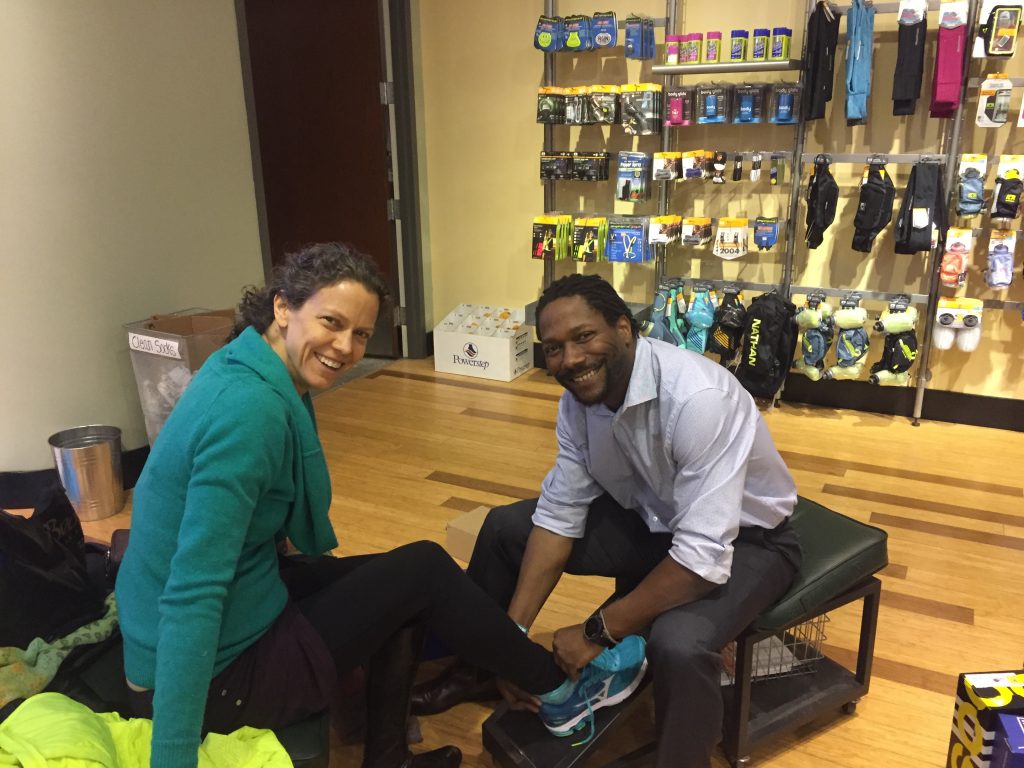 Finally it was Friday afternoon. Coach Cupcake arrived and we met HPRM #2 at Fleet Feet for a shoe fitting, a lesson in cushioning versus stability, and some new kicks. After a quick glass of wine, HPRM #1 picked us up and took us to the Gage for dinner. More amazing food. Fantastic cocktails. More laughing than I’ve done in months. Alas eventually bedtime rolled around and we had to go our separate ways until morning. 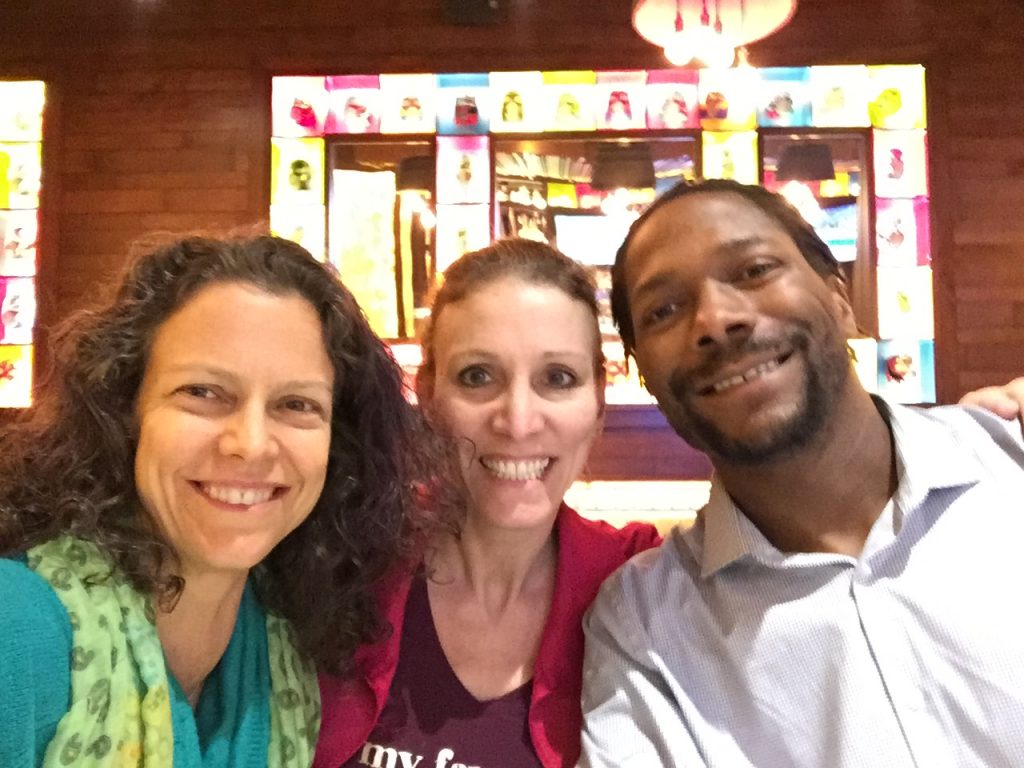 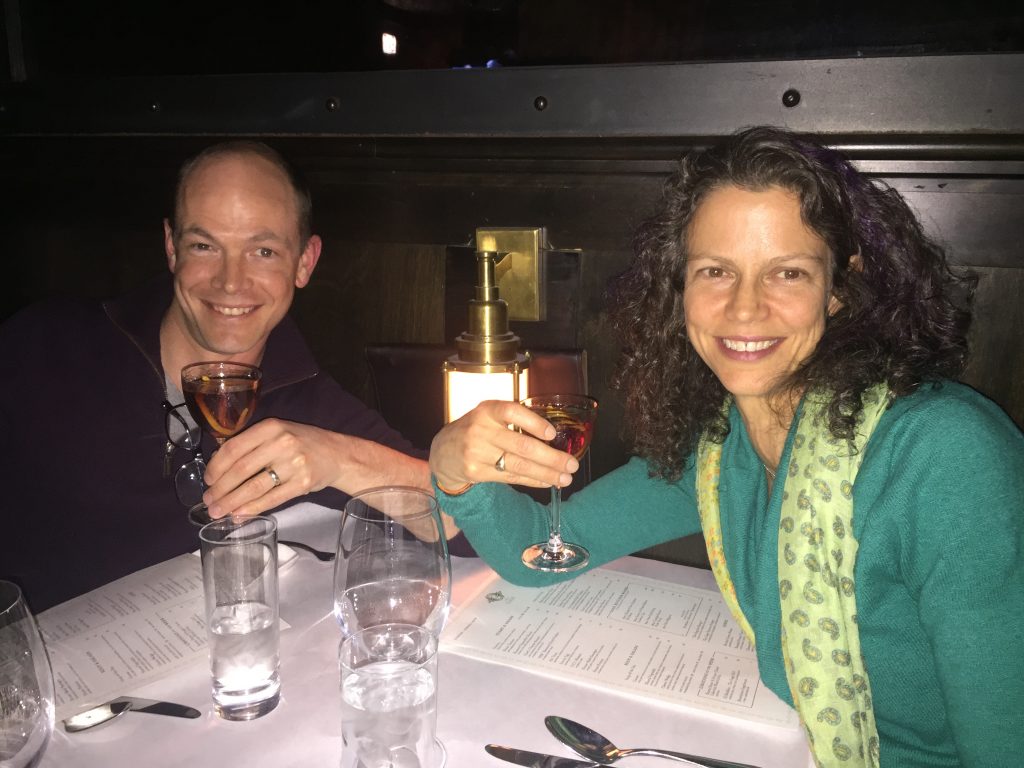 A word about pre-race planning, A, B, and C goals, that sort of thing. My 5K PR before this race was 25:08, set last summer at Old Wethersfield, with only about a month of running under my belt, post-injury. Everyone on my team knew that PR was probably soft, but how soft? HPRM #1 said he would pace me to whatever time I suggested so I kind of needed to suggest something. Coach Mick said maybe 24:10. I loved that idea, but what about sneaking under 24? Not impossible. Then I ran a speedy track workout, but we also got the weather report for race day. Gale force winds and rain. Goody. In the end, I told HPRM #1, let’s try to get under 24 and see how it goes.

The weather on race day at 7:30am was not bad. Overcast, about 40 degrees and a little breezy – perfect race weather really. But by 8:15am it was closer to 30 degrees, very strong winds and starting to rain. I had convinced quite a few people to join us for the race though in the end, many had to back out because of family or work commitments. But the intrepid crew of me, HPRM #1, Coach Cupcake, The FatMan, and Peperuda met up before the race. The weather was really getting bad so we picked up our bibs and hid in Coach Cupcake’s car. 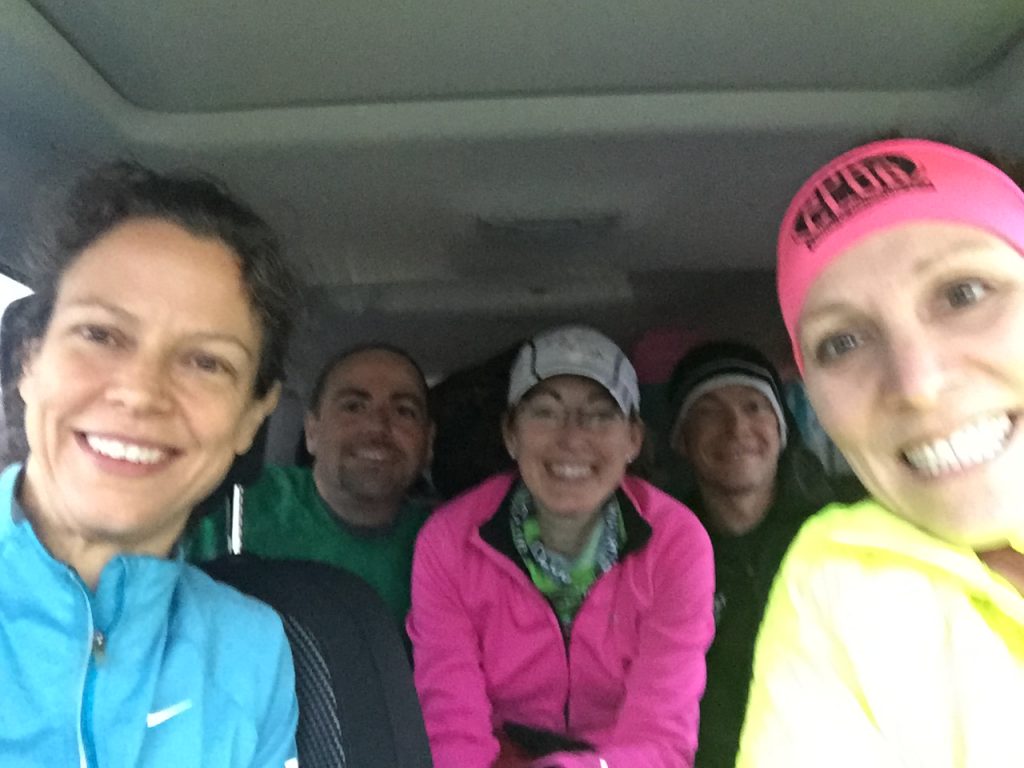 By 8:30am, it was sort of now or never for a warm up so HPRM #1 and I got out and braved the weather. We ran a bit on the course and back. It was basically just plain awful. We were getting pelted with freezing cold rain that was coming down nearly sideways. The race coordinators took down the inflatable finishing line arch and packed the petting zoo animals back into their crates. Of course I considered adjusting my goal for the race, but I also thought, it’s not like slowing down is going to suddenly make this thing fun. It’s going to be pretty miserable either way. I thought even if I couldn’t get under 24, I could probably still PR. You never know, nothing ventured, nothing gained, so I figured we might as well go for it.

We got back to the start to line up and I handed over my watch. This was HPRM #1’s only pre-condition for his pacing duties and he was quite specific: One watch, mine, on his wrist. He would be sure we were close together so the time was accurate, but I would have no information about pace. He also told me I should run quite close to him so he could block the wind. He did this funny hip-patting move while we were running, just to remind me. HPRM #1 did not earn his nickname for nothing and I had total faith in his pacing abilities. I just wasn’t sure I would be able to keep up! I gave him my watch, showed him which buttons to push, and we got into the corral. We would have liked to start closer to the front than we did but it was too crowded to get up there. They started us off and we started dodging around people. HPRM #1 really knows how to move through a crowd so I just followed in his wake until we got clear of the slower runners in front of us.

I’m guessing it took about half a mile for the race to start feeling hard. That was disappointing and scary because I knew we had quite a ways to go yet and I was not at all sure I could hold that pace for 20 more minutes. Coach Mick has this graph about effort versus perceived effort in a 5K. The point of the graph, I think, is to get you to understand that at some point, the same effort will feel much harder. That’s ok and you should just keep going. But I had certainly been hoping to reach that point quite a bit later in the race! I tried not panic and HPRM #1 said some reassuring stuff about smooth breathing or something, but somewhere in there, I also started to feel a little bit better instead of worse. I probably wasn’t adequately warmed up at the beginning, but given the weather, that was likely inevitable.

In the first mile, I thought some about running with music. I generally run with music when I’m alone and without music when I’m with friends. I hadn’t been sure what to do at the race because I think the music helps distract me from the hurting, but I didn’t know if HPRM #1 would care (he did not). It also felt like a bother to be messing with my beloved iPod shuffle given the weather. I know “serious” runners don’t usually listen to music (I’m looking at you Retiree…) and I’ve had plenty of debates on this topic with those serious runner types. I ended up listening to music or at least having the shuffle on – I’m not sure I could hear it – but I might start experimenting more with no music. In this case, though, I realized music was a time cue. I didn’t have my watch, but I know how long my songs are. That pretty much kept me going for the first mile.

The worst thing about the second mile was that we passed the 2-mile marker but it was on the other side of the course for the out-and-back. In my increasingly foggy state, it wasn’t clear whether that had in fact been in fact two miles or whether we had to turn around first and come back to get to two miles. It turned out to be the latter, unfortunately. HPRM #1 kept up a pretty constant stream of chatter about smooth breathing, it’s going great, you’re right where you need to be. He also picked out a girl in a green shirt and said we were going to run her down. Despite his promise that this would take half a mile, we ended up chasing her the last two miles of the race. I’m sure she could hear him talking and sped up! 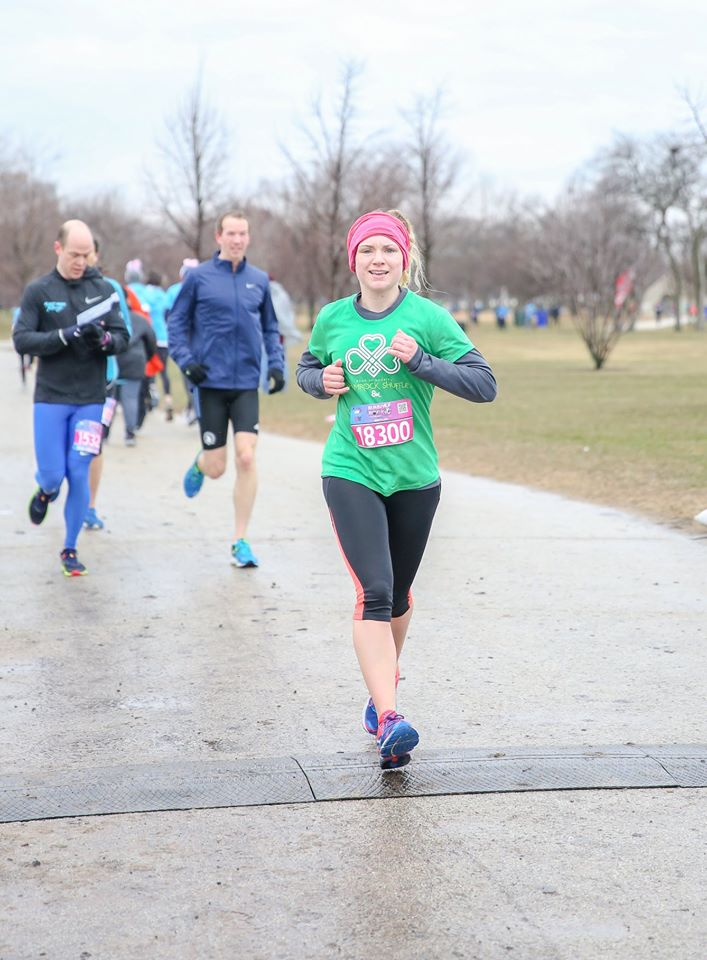 My only finishing line picture. That is the girl in green. Behind her HPRM #1 is fussing with my watch and next to him is Bruno Mars. You can see my light blue shoulder behind HPRM #1. Haha!

Somewhere along the way, HPRM #1 had a friend show up. He was just out for a training run, but when he heard about the pacing project, he jumped in to help. I didn’t completely catch his name, but it was something like Bruno. Like Bruno Mars? Really? Who names their kid Bruno? That’s the sort of weird stuff that was going through my mind. I think I am wider than the two of these guys smushed together so I’m not sure they created much of a wind block, but they did their best.

By now things were getting really quite hard. I had assumed I would think about form cues like “elbows!” or “nose before toes!” or maybe about people who inspire me or something along those lines, but I did not. Instead my thoughts ran more like this:

The next part is a bit of a blur. I gave HPRM #1 a big hug. He gave me my medal. I went and leaned pretty hard on the barricade with my head down trying to catch my breath. He asked me if I wanted to know my time – I said YES! He asked if I wanted to guess my time – I said NO! He said 23:21 [Actual time 23:20!!! That is a PR by 1 minute, 48 seconds! For a freaking 5K!]. I started smiling and I haven’t really stopped. It also turns out I was second in my age group and 12th overall woman out of 307! Coach Cupcake was third in our age group! We cheered as the rest of the gang finished. I got to say hi to another one of Coach Mick’s runners who had come to the race. HPRM #1 and I ran a mile or so out by the lake which was spectacular because of the big waves. Then our gang went to brunch at the Chicago Diner. They did not have waffles, which I no longer wanted anyway. They did have mimosas, my go-to post-race celebratory drink. 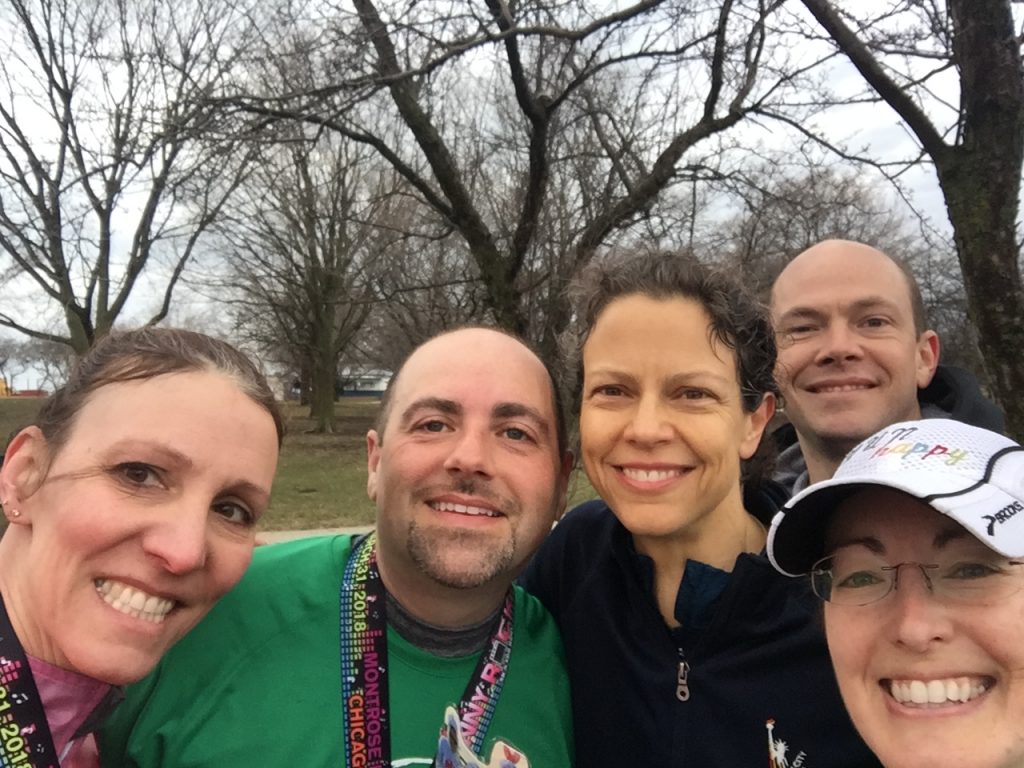 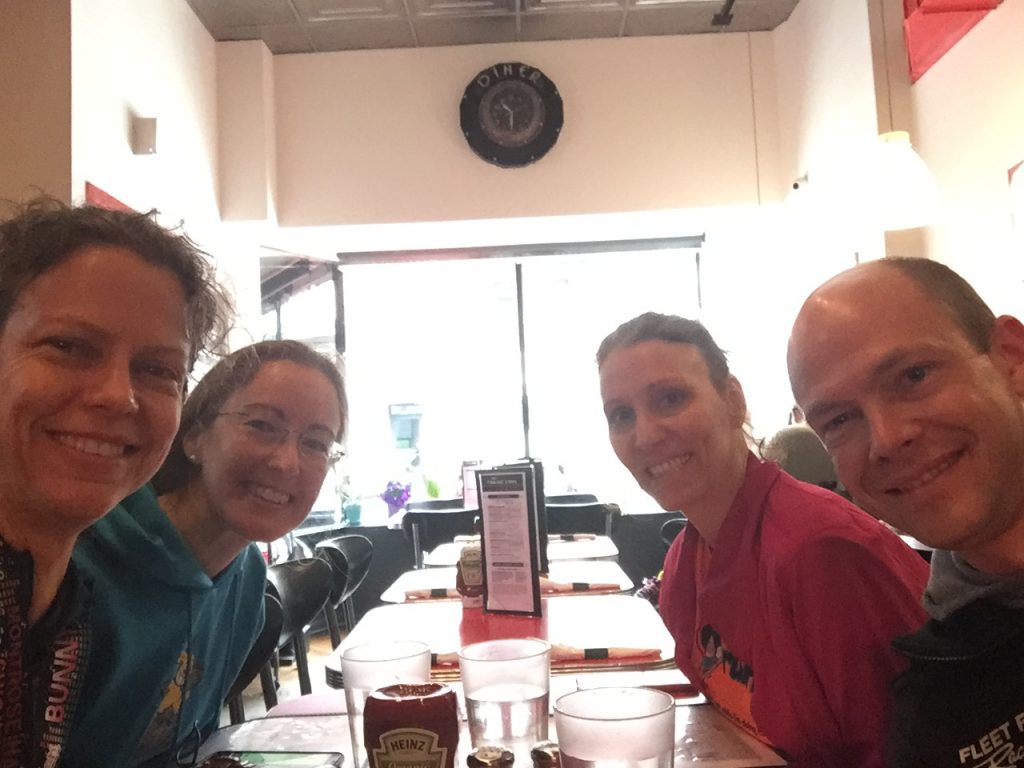 Redemption. Coach Mick once distinguished between two types of runners. One would be “Sarah the Runner” and the other is “Sarah who runs”. It’s an identity question. Neither is better, but they are different. I spent a lot of time and effort trying to become “Sarah the Runner” because I thought that was the only way to get faster. Instead I got injured, frustrated, and so very sad. About a year ago, I realized I had to be “Sarah who runs” instead. Many people have told me I am inspiring, but I am not sure I had much choice in this evolution. “Sarah who runs” is much happier and I’ve had my suspicion that she also got a lot faster, but no proof. So thank you, crazy bunny race, for the chance at some proof and a little piece of redemption. Thank you to my wonderful team, especially Coach Mick and HPRM #1. Thank you always to the Incredible Mervus, whose support and love is invaluable. 23:20 ain’t too shabby. If I can stand to run another stupid 5K, who knows what might happen next. 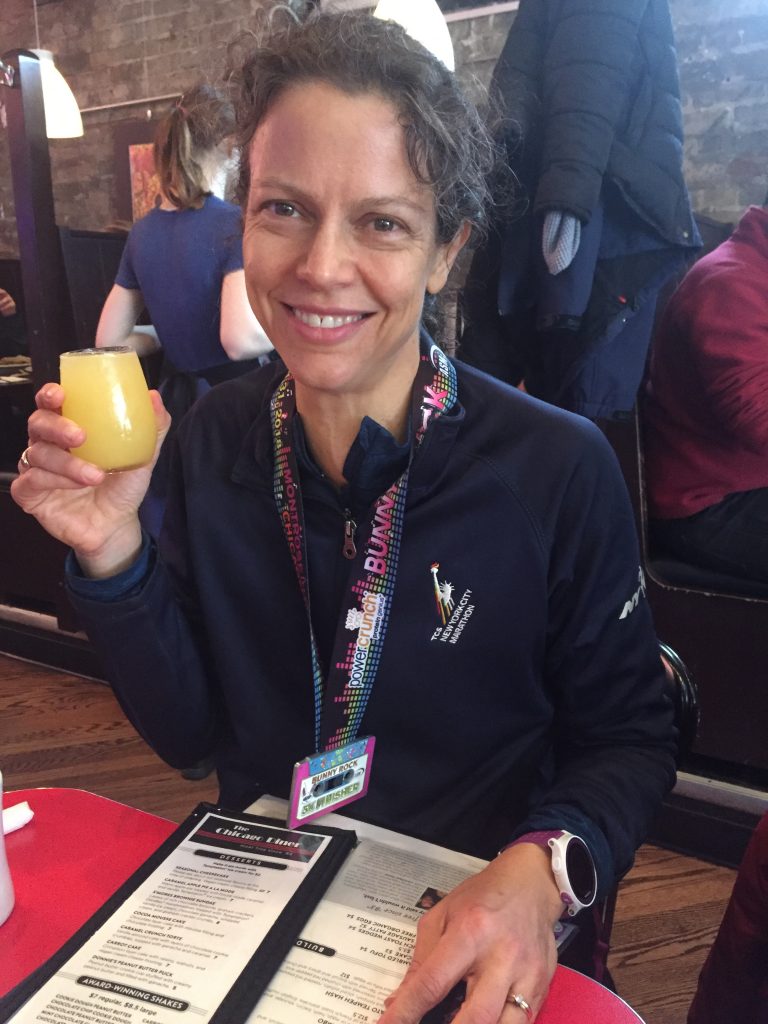