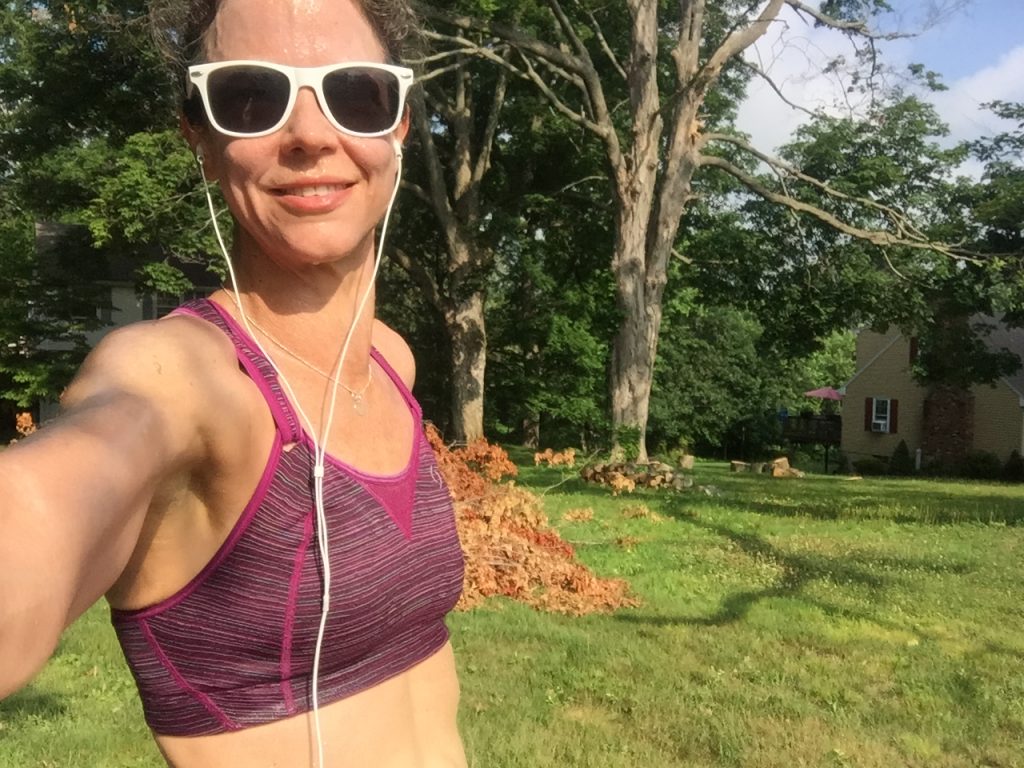 I ran without my shirt yesterday. Without my most favorite, much-beloved-and-begged-for hot pink On Your Mark Coaching singlet. Not because I am #sobrave but because it was #sohot as it has been all week. Then I spent a lot of the run thinking about this act.

There’s a whole movement out there called the #SportsBraSquad. Started by Kelly Roberts of Run, Selfie, Repeat and then She Can & She Did, the #SportsBraSquad movement is about having women band together to go running shirtless as an act of empowerment. Now, I’m 100% in favor of women’s empowerment, but I have been a bit skeptical. To begin with, it feels a little bossy. I don’t feel empowered by someone out there in social-media-land telling me what to do, especially not what to wear. Second, I’m vaguely skeeved out by the idea that women taking off their clothes is empowering. I really don’t care what other people wear. I totally understand the feminist notion of taking back our right to run in whatever we damn well please, but this angle still makes me a little uncomfortable. Third, I’m genuinely skeeved out by the idea of bugs on my stomach. I realize that is a strange fear, but I have a right to my own weirdness, so there it is. Fourth, the risk of a sunburned stomach and/or chafing. Also bad, in fact, terrible. My stance has been that I don’t need to run with my shirt off to be empowered. No one needs to see pictures of me shirtless on social media. Or, frankly, of anyone else. Post your picture or don’t – I don’t care. Running without a shirt is not #sobrave. Fighting fires is #sobrave. Taking care of sick kids is #sobrave. What you wear when running is #soirrelevant, or at least it should be.

But it’s been about a million degrees for what seems like forever. I’ve run once shirtless with Snarky Girl when we spontaneously took off our shirts mid-run. I’ve run a couple of times shirtless on the track, which feels somehow like a safer space for this act of “rebellion.” But yesterday I was running alone on the street. My planned route took me past campus where I might encounter students or colleagues. Shirt on as usual? Or shirt off? I went outside. I took my shirt off. I did my warm up. I put my shirt back on. Maybe it wouldn’t make that much difference. What if I took it off and someone honked at me? Or a student saw me? Hmmm. I thought about High Power Running Mentor #1 running in Chicago. I was 100% sure he would run shirtless today, a fact which was subsequently confirmed. Why should he get to do that just because he’s a guy? Perhaps this issue was more complicated than I thought.

I ran my first mile with my shirt on. A very light weight singlet that’s almost not there at all and which is emblazoned with my beloved coach’s logo. I felt what little breeze there was on my arms and my shoulders, but not my stomach. At the first mile mark, I stopped, took my shirt off, and stuffed it into my shorts for safe keeping. I started running again, wondering about potential students, potential honking. But I encountered neither and pretty quickly forgot what I was wearing.

As I rounded the turn near campus, though, I started thinking again. Was it really #soirrelevant what I wore? We spent the 4th of July at a nearby lake with a collection of good friends. The younger set included four teenage boys, who spent their time in and out of the water (shirts on and off at will), playing Frisbee and tetherball, talking non-stop to each other and ignoring the adults except for requests for money to buy French fries. It also included one teenage girl, who spent a lot of time sitting at the picnic table. She never appeared in her bathing suit, but she did play some tetherball and go for a hike with her dad. Now, she didn’t have any female cousins or friends with her, but the moms of the group also collectively noted that while being a teenager has some awful moments for everyone involved, being a female teenager is probably more awful from a physical-changes perspective.

On my run, a mile later, I remembered another group of three guys and a girl, this time from my weight-lifting session at the YMCA earlier in the week. These four were all in their early 20s. One young man was helping the other two guys learn how to lift – good for them! The young woman was not on the treadmill. She was asking the guys to work in between sets in order to use the squat bar and she soon struck up a conversation with them. Before long, she was also advising the two beginners on their form for dead lifts and cheering them on. She could out-lift the two newbies easily, something they all acknowledged with a lot of good-natured laughing. They were fun to watch while I stretched. And yes, she was wearing only a sports bra. #coincidence? #soirrelevant? I am less sure. How does one traverse the path from 14 year old no-swimming-at-the-lake to 24 year old joking-with-guys-at-the-gym? I have no idea (well, except that lifting weights sure isn’t going to hurt anything…), but I do have a 10 year old entering the murky waters of adolescence. She spent almost the entire time at the lake playing in the water in her bathing suit. If she sees her mom running as part of the sports bra squad, will that help her be comfortable with the physical changes that are already arriving? If so, that would be #soworthit. On the other hand, when I got inside the house, I found a caterpillar on my stomach, #sogross. So, stay tuned. 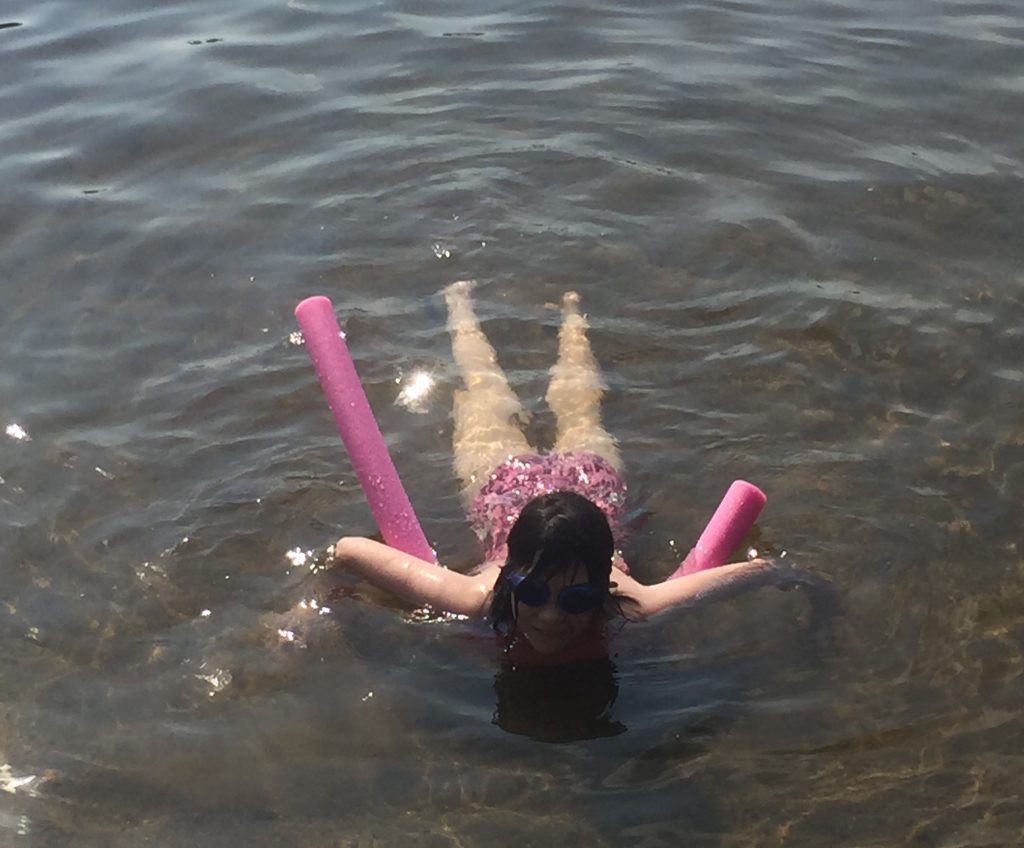