Blessing of the Fleet Race Report 2022 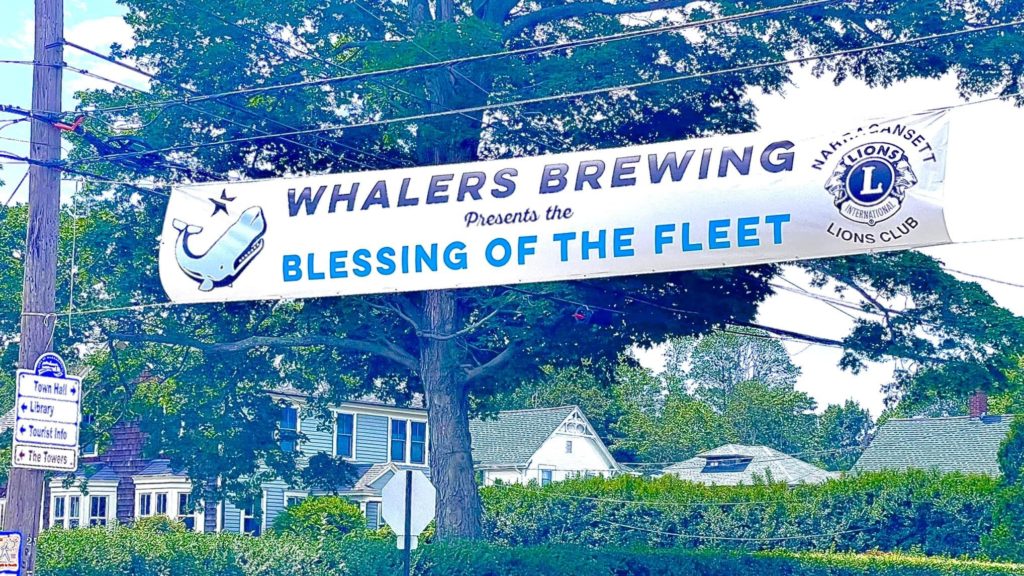 When I scheduled the thyroid surgery for May 27, I lay down a series of markers in my mind. These were things I wanted to be able to accomplish by a particular time: March in the Pride Parade on June 4th. Attend church on June 5th. Go to Portugal for my scheduled conference the last week of June. Run the Blessing of the Fleet 10 Miler on July 29th.

When I made that plan, I wasn’t sure if I would be racing the Blessing, but it seemed reasonable to expect that I would be able to cover 10 miles on my own two feet by two months post-surgery. In late June, I thought I might be up to racing, but then I got Covid while in Portugal. And the post-surgical complications arrived: Potential vocal damage and low calcium. But I made a pros and cons list and the pros list was longer. The Blessing would be a celebration of getting through the last couple of months and of working with a new coach. More on that at some point. I’d run 10 miles a couple of times and I was sure I could cover the distance. Plus, I really wanted to see Chewie and Allegro Fuerte and I wanted to get out of town for a bit. It really was a last minute decision – I registered the night before the race.

We did the same routine as last year – Mervus and I picked up Rose directly from circus camp and headed for Narragansett. We hit some traffic and I was nervous about getting there on time, but we more or less managed it. I nearly lost my bib, having left it behind at the table where I stopped to buy some Gu. The pre-race scene was a bit of a wake-up call in terms of my voice. My vocal cords sustained some damage during my thyroid surgery in late May. When I am having a one-on-one conversation indoors, my voice is quiet, but comprehensible. In fifteen minutes of walking around outside with a lot of ambient noise, at least five different people were unable to hear what I was saying. Oy. 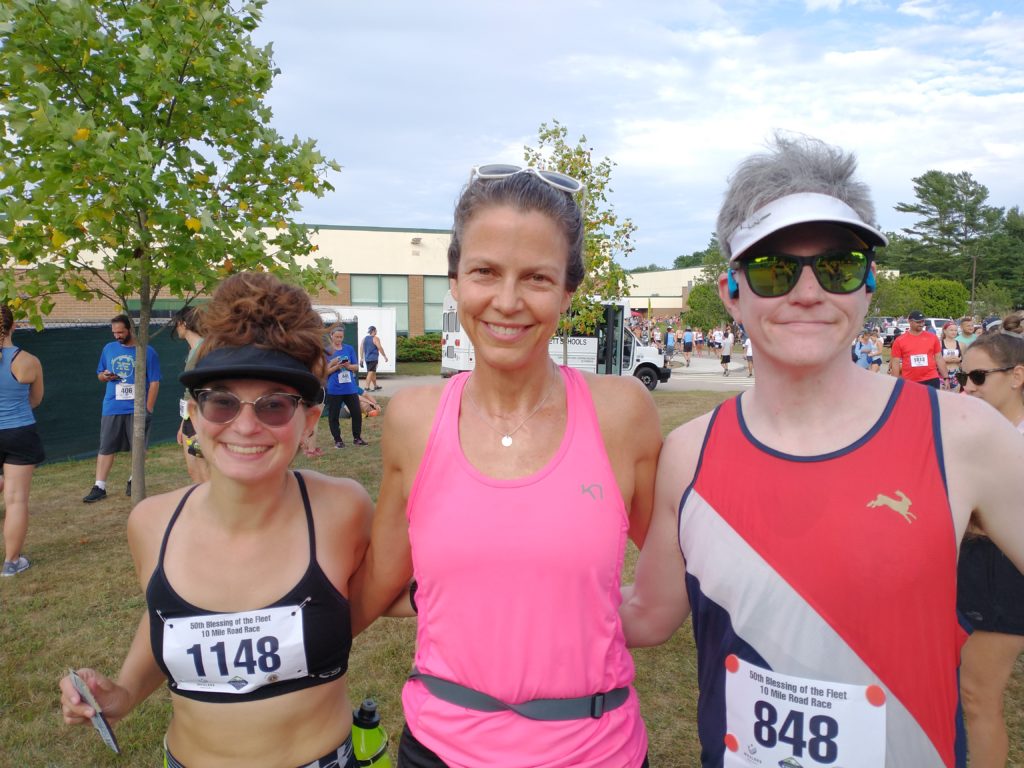 Still, we found Chewie and Allegro Fuerte and it was SO good to see them. After a quick pit-stop at the porta-potty, we went and lined up. I sent them ahead, but stayed pretty far back. I spotted an Achilles International guide working with a blind runner and I even considered asking if I could just stick with them, but they were aiming for a 12:30 pace. I knew I’d be faster than that. My coach had advised to start the race at easy long run effort and then see how it felt after a couple of miles. If I felt like pushing, physically and mentally, I could go for it. That seemed like a great plan. Rose and Mervus got up on a big rock so they could wave at me at the start. This is currently Rose’s favorite race to spectate, though I sometimes think the most recent race is her favorite race. Anyway, they fired the gun and off we went. 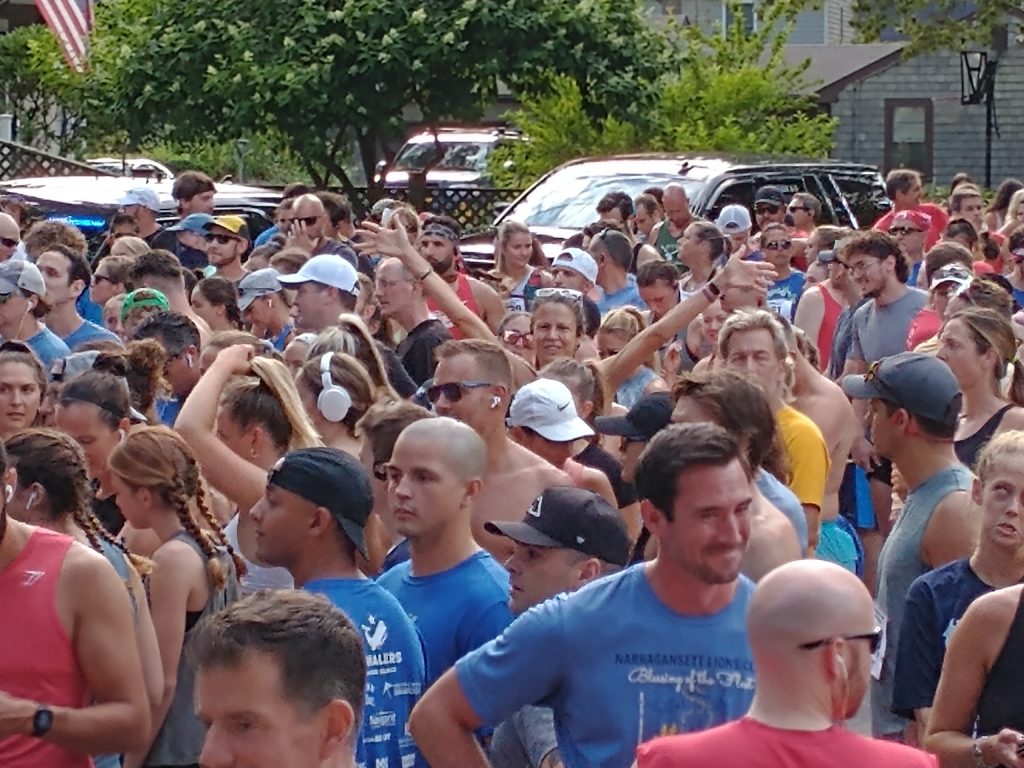 I love running and I love racing! The joy of running in a big pack of people is incomparable. Last year the Blessing was my first big race post-pandemic and everything still felt a bit tentative. This year, some people wore masks inside, but there were many more spectators and a much more joyful feel to the race. I had decided not to look at my watch and except for one glance by mistake, I didn’t. It felt wonderful to be running with people and the pace was very comfortable.

After a couple of miles, it was decision time. Did I want to push? I realized a couple of things simultaneously. First, I got my racing brain back! This is huge! Even prior to all the medical crap, I’ve been struggling with racing for about 18 months. The pandemic made me SO angry. I raced a lot of stupid emotionally-driven 5Ks where I would start hot and just run as hard as I could until I was slightly less pissed off and then I would slow down dramatically. That felt awful. I worked with a sports psychologist last spring. She helped me let go of the anger (mostly). We also started working on remembering all the mental cues I’ve used for racing in the past and coming up with some new ones. My racing in 2022 has been better than it was in 2021, but except for the Run for Refugees 5K, it still hasn’t been stellar. The Blessing was stellar. I didn’t run especially fast for me, but it was like I remembered how to drive and that was marvelous. I can hardly express how marvelous it felt.

Anyway, after a couple of miles, I had to assess whether to push. My biggest worry was my calcium deficiency. I changed how I was handling that issue in the lead-up to the race. Prior to the Blessing, I had been taking a Tums while running when symptoms show up. For me, symptoms are either a pins-and-needles tingling in my feet and hands or cramping, usually in my quads. The afternoon before the race, I realized that I should be hydrating with electrolytes to prepare for a warm race. Then I thought, I don’t wait until I am thirsty before I drink. I don’t wait to be hungry to take a gel. I drink and fuel on a schedule because if you fall behind, it’s very hard to catch up. Why would calcium be any different? I decided to try pre-loading the calcium and I had a Tums at noon, 2pm, 4pm, 5pm, and 6pm on the starting line. I also decided to take a gel and a Tums at 3 miles and 6 miles. New plan!

The truth is, this calcium crap is scary. I get symptoms of low calcium and take the Tums and that raises my calcium levels. But if calcium levels get too low, that can cause extreme muscle cramps. As an endocrinologist friend put it, “Your heart is a muscle.” A heart “muscle cramp” is pretty much a heart attack. I don’t believe I am in any danger of that, but I would like to keep it that way!

I thought about my race car driving analogy again. Running the Blessing really did feel like I was back in control of my own race car. Allegro Fuerte is a huge NASCAR fan so maybe some of his analogies are rubbing off on me. Anyway, I figured the first race back in control of the car is not the time to go for it. Instead, I wanted to see how it felt to run 10 continuous miles at a pace a bit faster than easy, but not even close to how it would feel to race. Just remember how to drive the damn car. By mile three, I knew I’d be holding at the effort level I had established.

That’s when things got fun. Really fun. I was in a great summertime race. I had started almost all the way back so I was passing a lot of people. I was running just a little bit faster than easy. Fast enough to feel fast and smooth, but not like it was much work. A summertime race with a ton of spectators on a beautiful night and I was feeling really good. I waved to a couple of old guys. They smiled and waved back. I blew kisses to the next older gentleman I passed. He laughed. I started high fiving all the little kids. I was grinning like a lunatic, a really happy lunatic. People started yelling “Go Chicago!” because of the sports bra I was wearing. It was amazing! The one back-to-earth moment came when I tried to call out to someone. It came out as an incomprehensible croak. Right. My voice sounds normal to me inside my head so I am constantly forgetting that it’s not. Eesh. I resolved not to make any more noise until the finish line. I raced contemplating what it must be like to be mute. 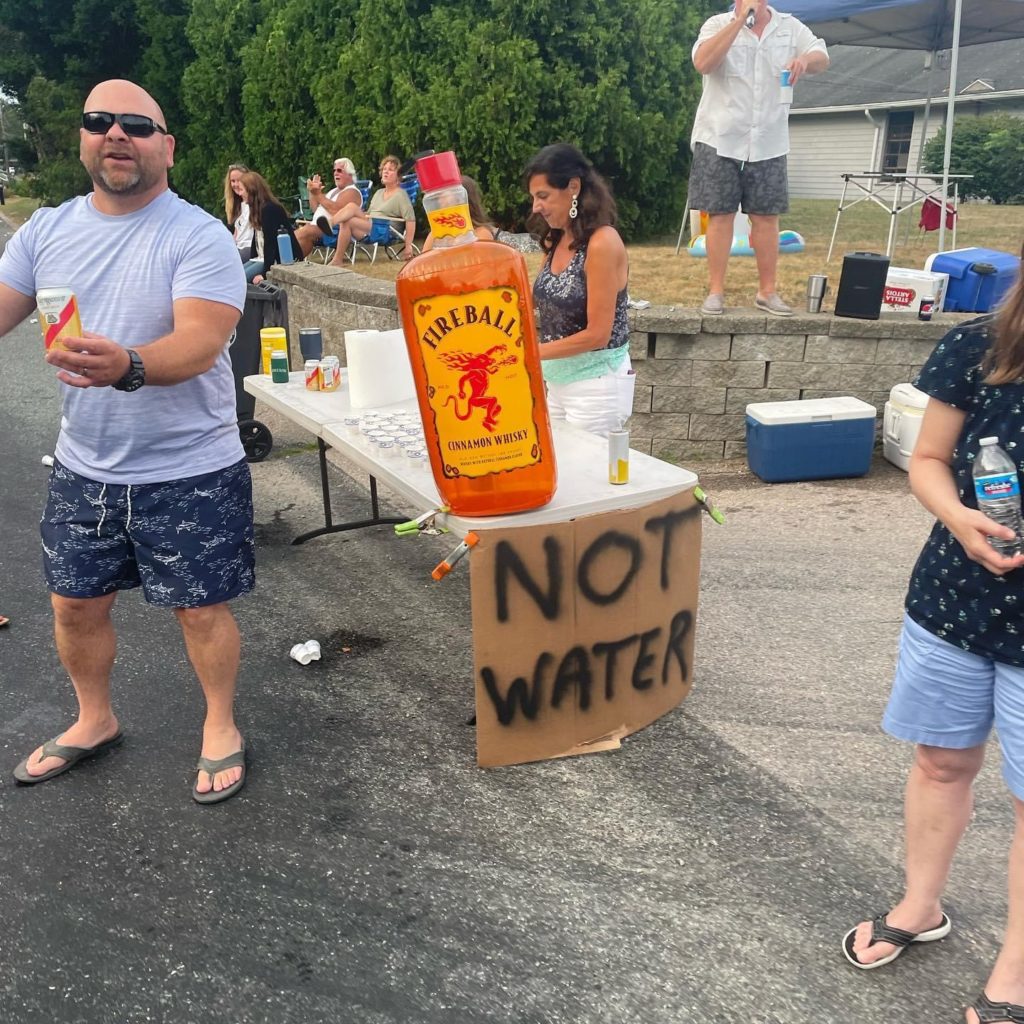 The Blessing is an interesting course. You run along the water for a few miles. There’s a long somewhat unpleasant stretch up a hill on a more exposed road. Then eventually you turn right and head into some neighborhoods with more shade. It was hot. I dumped water on my head and stuffed ice down my sports bra when it was available. None of that mattered. I took my gel and my Tums at miles 3 and 6 and I didn’t cramp. Running with no cramping was the true Blessing of the night! 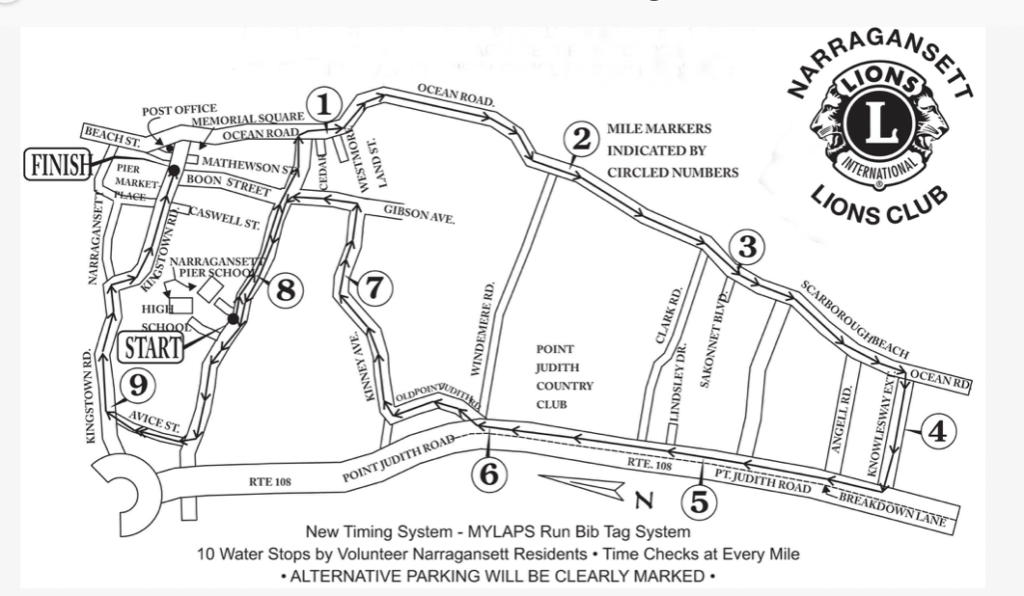 The course doubles back on itself so Mervus and Rose could move easily from the start to mile 7.5. I found them quickly and waved and smiled. I almost stopped to tell them how damn good I was feeling and how magical the race was, but I figured there would be time for that later. The last two miles are a little bit downhill. I pressed just a little bit and felt maybe the whisper of a cramp, but nothing serious. I pushed a little more and my last mile was my fastest: 8:21. For reference, last year my average pace was 7:53. But that’s okay. This year, I remembered how to drive my race car. I ran (pretty) hard at the finish and felt so good! Last year I ran 1:19:32, for my only PR of 2021. This year I ran 1:31:14. My slowest 10 miler ever by a lot, but also one of the top three most joyous races of my life. 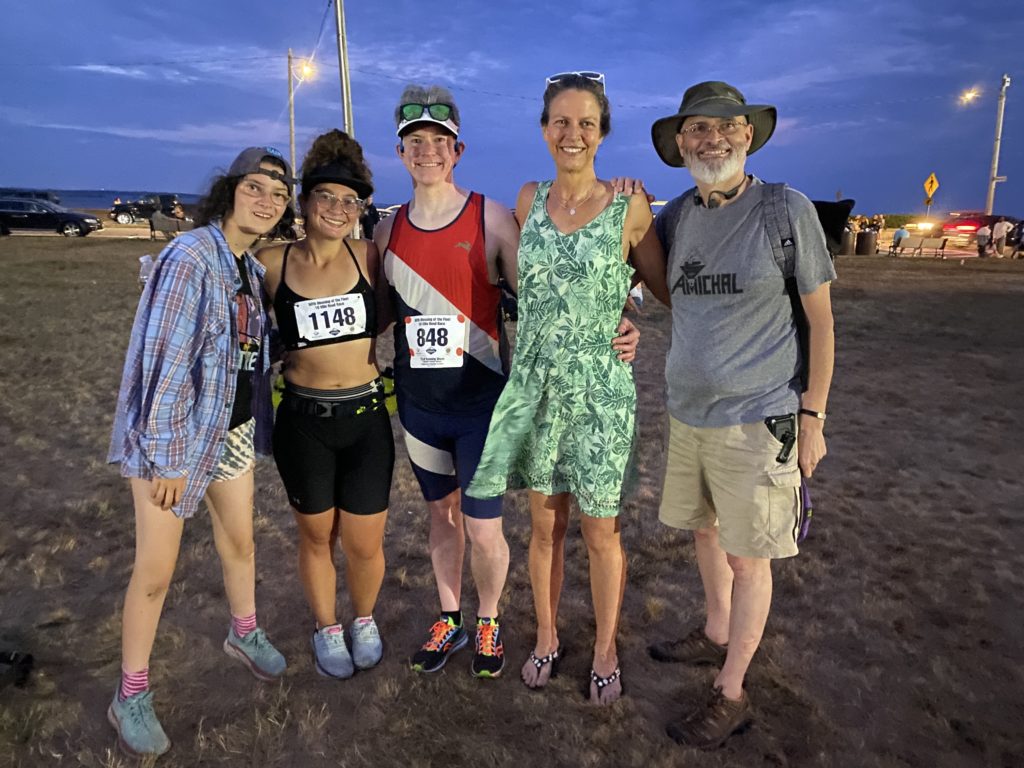 After the race, we spent time hanging out with Allegro Fuerte and Chewie, which was wonderful. We got nachos, which turned out to be terrible. The next day, my coach closed his coaching business. Mervus says I was the straw that broke the camel’s back. Maybe. It didn’t matter. (I wish him well, of course!). I found my racing self again. It might not be an easy road back. It’s going to involve a lot more calcium than I had anticipated or would like. But I’m on my way, and that’s what counts. 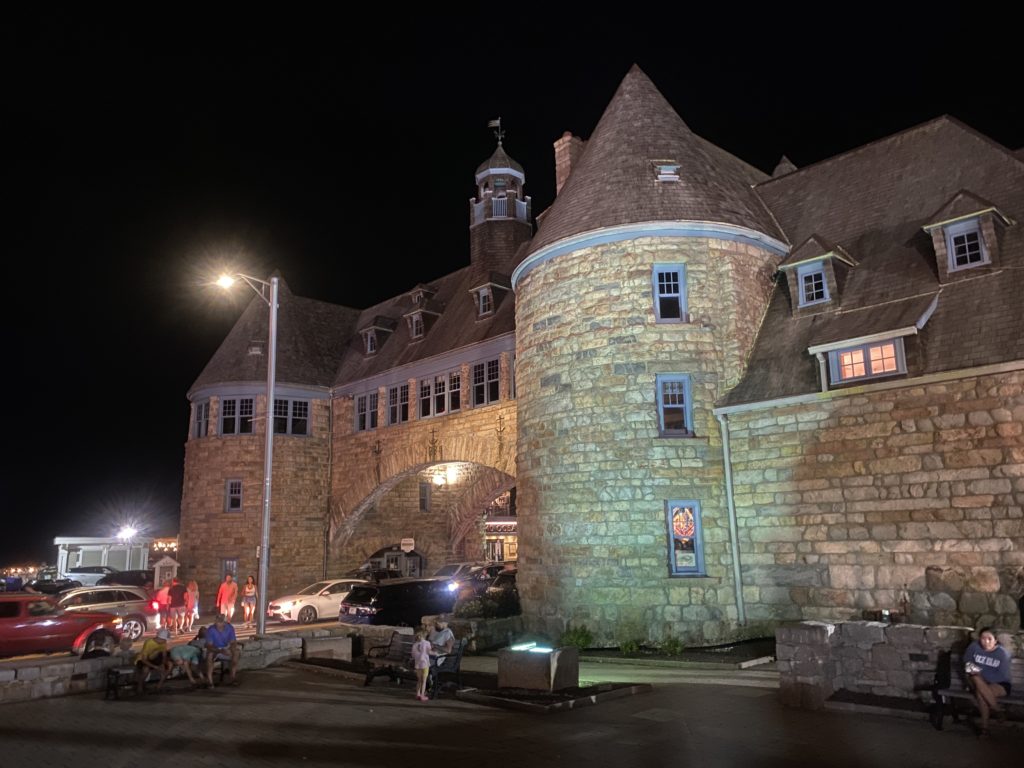 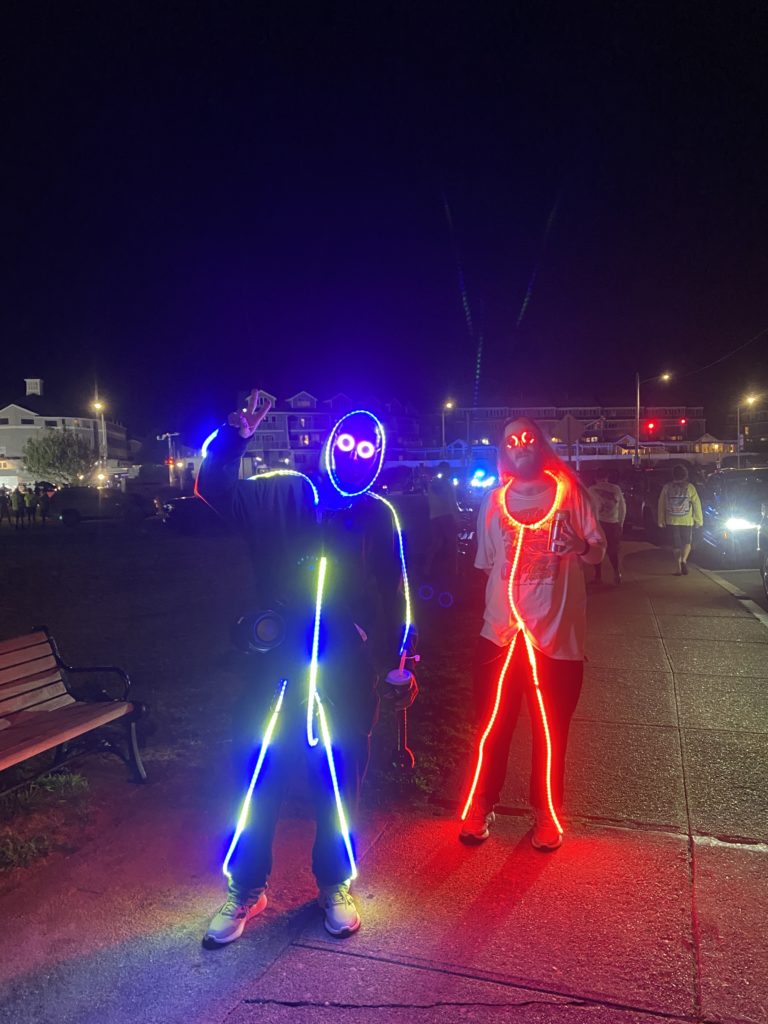