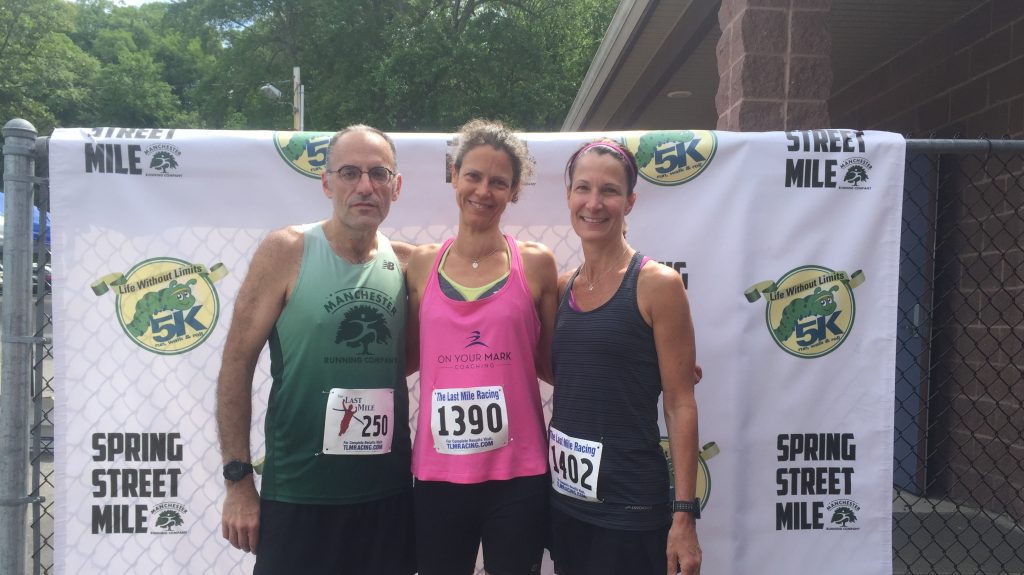 Sometimes spontaneous social racing is the best. The Retiree suggested I come run the Spring Street Mile sponsored by his (our) club, the Manchester Running Company. It’s a downhill mile race. I have only raced a mile once in my life, four years ago, so that 7:19 PR felt particularly soft. To add to the fun, the Retiree and I managed to convince North Shore Strider to come to town on really short notice to join us. She’s fresh off a BQ marathon (WOOT!), so why not a speedy mile?

I had done no mile-specific training and also have no clue how to race a mile so my initial plan had been just show up and run fast. Two days before the race, though, I did Coach Mick’s standard post-race fartlek run. This workout is alternating fast and slow running, no prescribed paces, just head out and run. It turns out even three minutes is a long, long time to try to run as fast as you can. I decided I needed a better plan. I also decided that one thing I wanted from the race was to not take the deal. I totally expected it to hurt. A lot. I’d be happy if I just kept running through the pain without backing off.

Since I have effectively no empirical experience with the mile, I did what any good academic would do: turn to theory. High Power Running Mentor #1 is actually somewhat of a specialist in the mile and he offered a crash course in execution a few days before the race. He recommended Greg McMillan’s “Go Zone” racing approach. Break the race into four zones by quarter with the critical third one being the “Go Zone.” If you don’t increase your effort in the “Go Zone,” you will end up slowing down. He also recommended watching a YouTube video of Hicham El Guerrouj breaking the world record for the mile. The announcer practically uses the Go Zone cues to call the race.

Of course, I also consulted Coach Mick about mile racing strategy. He said to focus on being strong, smooth, and controlled. Don’t go out too fast. Expect another league of hurt when compared with the 5K. In terms of effort cues, think “words” for the first half of the race and “partial words” for the second half. Also: Don’t hydrate. Excellent tip!

North Shore Strider and I enjoyed a glass of rosé on our screened in porch the night before the race, a race prep strategy I can’t possibly recommend enough. I don’t think this particular form of hydration was what Coach Mick was talking about. We got up Saturday and had oatmeal and coffee and drove to the race. It was so weird to be preparing to race only a mile. North Shore Strider wanted to try the Five Hour Energy shot so we both had those. We ran up the hill for the warm-up. That let us look at the course, which is indeed largely downhill. We ran another mile at the top. Suddenly it was 8:45am, fifteen minutes until start time. Coach Mick had recommended a thorough warm-up including drills and “the whole nine yards.” I fully confess to feeling ridiculous about doing drills so I’m always happy to be told to do them. I am good at following instructions. We lined up. It felt a whole lot like getting into the car of a roller coaster and suddenly realizing that it was much too late to change your mind about this idea. They had what looked like an actual gun for the start. Bang!

This is a fast race. The instructions say something like, if you’re not going to run under 5:10 for women, don’t line up in front. There were many, many fast-looking girls there and in about two seconds, they were all ahead of us. North Shore Strider and I both felt like we were suddenly last with no one at all behind us. 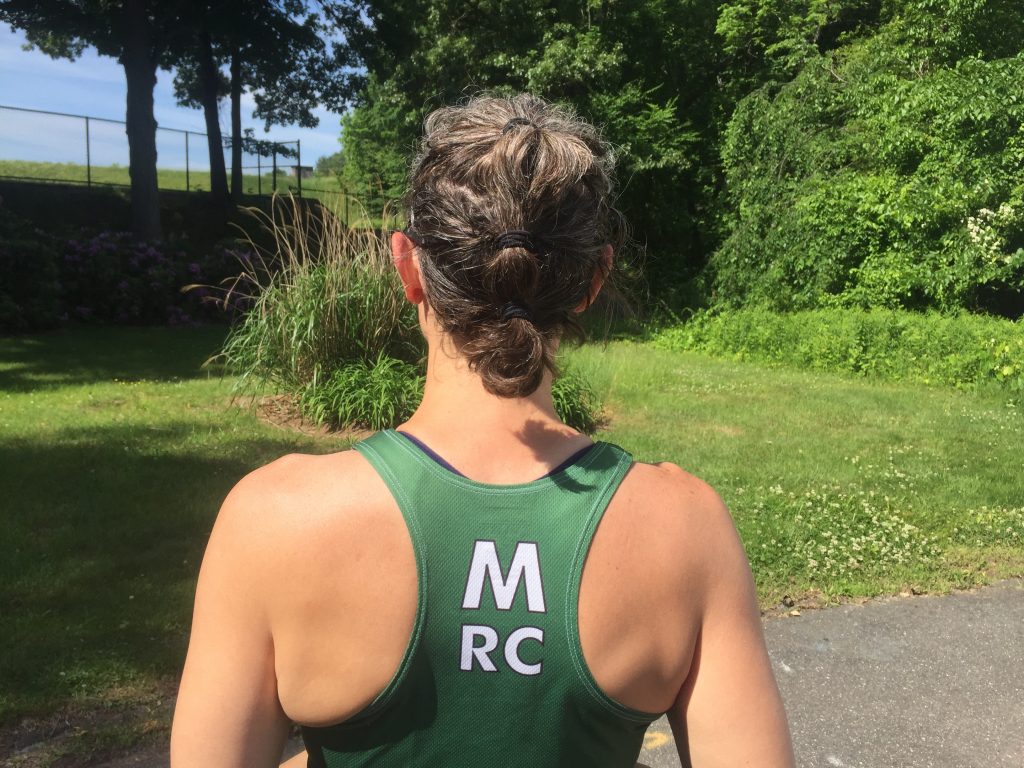 Before the race, I had been chatting with Ferrari, the woman who came in first at Sprint into Spring. I know she’s close to me in speed though maybe a tad faster. She had her hair up in a fancy braid and I just fixed my eyes on that and followed her on down the hill.

My brain was chanting: smooth and strong, smooth and strong, smooth and strong. Controlled! Controlled! Good advice for a crazy downhill race. When we got to the first cone, marking the first quarter, I thought, oh damn, that took forever. This is going to be a very long race. We had set our watches for quarter mile splits. North Shore Strider looked at her watch and immediately dropped back. I did not look at mine so I did not discover until later that I ran the first quarter mile in 1:26.7. For reference, the fastest time I know of myself running a quarter on a track is 1:39. I’m happy I didn’t check.

At the halfway mark, they were calling out splits, and not in total number of seconds, which we had wondered about, but as “3:01; 3:02” etc. That was much easier to understand than 180 would have been, but holy crap! I had vaguely intended to run the first quarter or two in 1:40 each, which should have put me at 3:20, not 3:01. My addled brain certainly could not process this information. I only took in that the splits guy said 3:01 and that was way faster than I had intended. Oops. 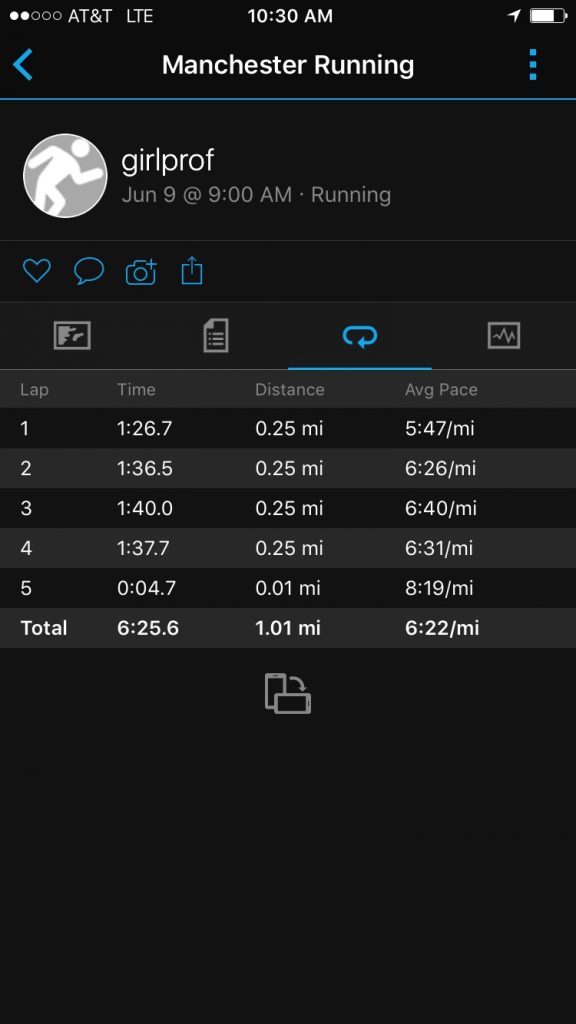 I did remember that after the half split, I was now in the “Go Zone” the most important of the race. And, I kept it together enough to know that if I didn’t increase effort, I was going to slow down. I’m happy that I at least tried to increase effort though I’ve no clue if I managed to or not. I did slow down.

Somewhere in the “Go Zone” North Shore Strider came up from behind me. As she ran past me, she said “I really want to take the deal right now.” Ha ha ha! This is in everyone’s heads! But what I really thought was – oh, she is talking much too much. We had already had a conversation about how much she had been able to talk in the last 10K of her recent marathon. My brain flashed to Coach Mick’s advice: partial words by now. I was not capable of saying anything at all. She sailed by me while yacking on about how badly she wanted to take the deal. I would have loved to beat her but I wasn’t particularly demoralized when she passed me. I truly did not take the deal so I felt good about that. 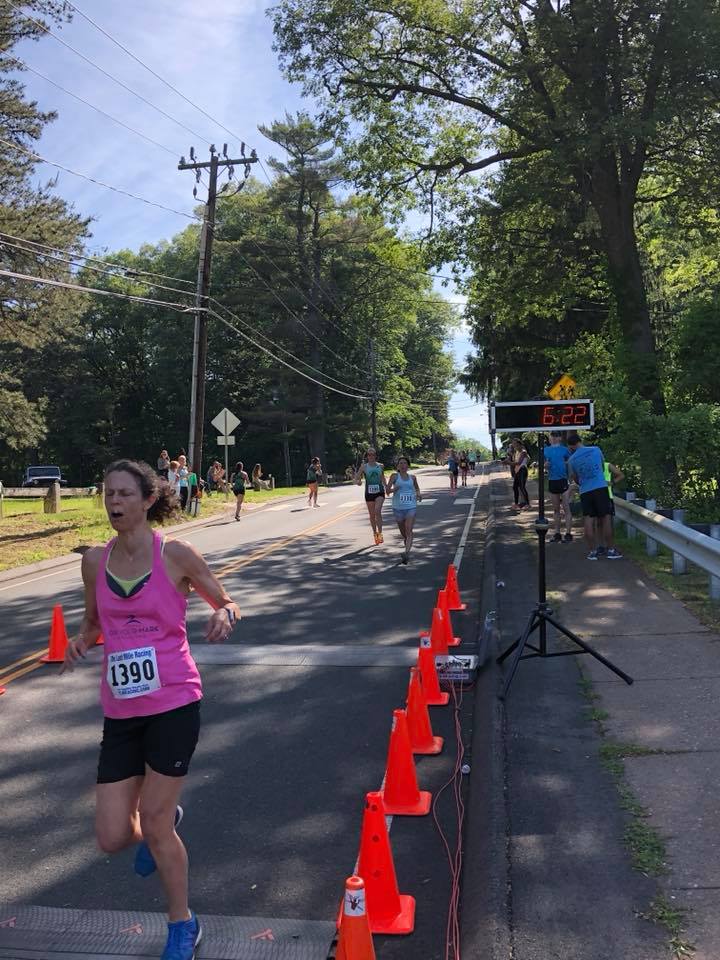 In fact, though, my brain wasn’t really offering much in the way of a deal. I was running about as hard as I could, or as hard as seemed even vaguely sensible. I remembered that HPRM#1 said at the halfway point I should be considering dropping out and I did think, it would be awfully nice to stop running. But I didn’t want to drop out. I just kept chasing that braid down. Finally we blissfully passed the third cone and I knew we had a steep downhill and then the finishing chute and then, there it was! I gunned it as much as I could and crossed the line right as the clock clicked over to 6:20. Official time: 6:19.8!

North Shore Strider had crossed two seconds before me and I found her hunched over the railing on the side of the road. I joined her in leaning over and breathing very hard. The mile is so horrible and simultaneously wonderful. We were both elated and totally wrung out.

We went for a little cool down jog. Got some water. Hung around and talked. The Retiree WON the 5K that followed the mile. Then we all went out for brunch. In my post-race analysis, I’ve come to a few conclusions. First, the mile is really interesting. HPRM#1 will laugh, but it’s true. I feel like it’s a good match for the marathon. It’s a distance with glory and history. Something you can sink your teeth into. Second, I didn’t take the deal and I’m super pleased. Third, it hurt less than I expected. I don’t think this is me making friends with pain. I suspect this is me still being fatigued from half marathon the week before and therefore not able to run as fast as I might have. My legs ran out of steam before my lungs did. I kept pressing on the gas pedal but that was all I had. I’m totally okay with that result. In fact, I’ve been wondering what events I might want to try at this summer’s MRC track meets and I think it’s going to be the mile. 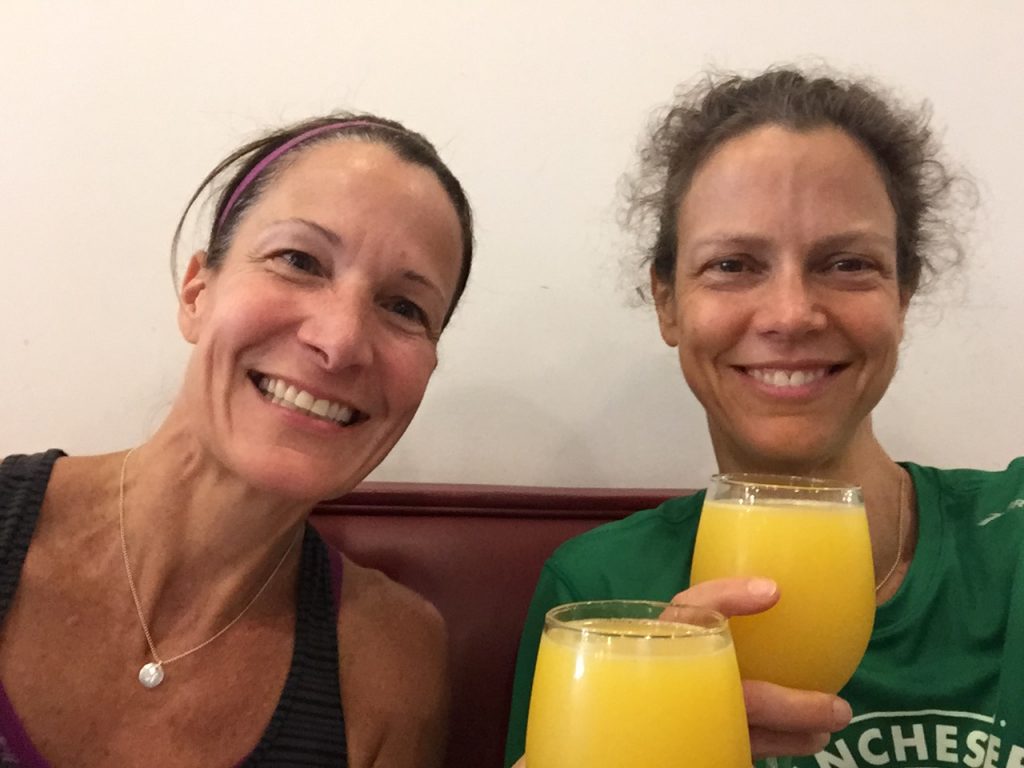