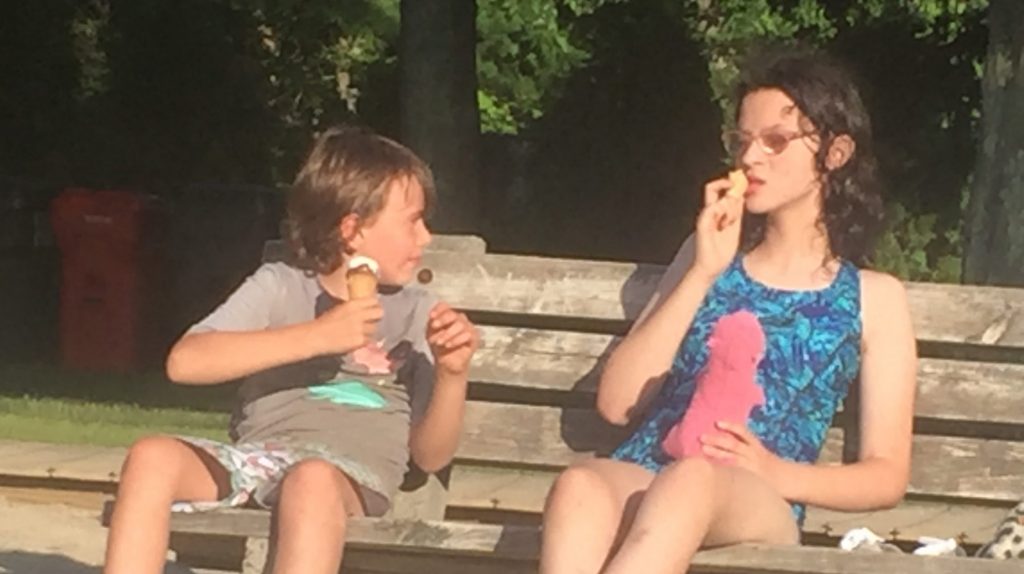 His laugh, so clear and sudden in my ears, I was sure he must be next to me!

Do you ever run with someone who isn’t there? Not a ghost, just a friend or maybe a running idol or your coach. Most runners find that having someone with you makes the effort easier. During the past months, many of us have run alone, but even during normal times, it can be hard to find someone who shares your schedule and pace. That’s when I resort to imaginary running friends.

It started with Snarky Girl on easy runs. It can be hard to find conversational pace if you have no one to converse with. Since she’s one of my best easy run buddies, I started talking to her even when she wasn’t there to be sure I didn’t go too fast. We’ve had some great talks this way, even if they do tend to be one-sided.

Most commonly, however, my imaginary running friends show up at the track, probably because that’s when I need them most. Coach Mick doesn’t say much. Occasionally he yells “Elbows! Elbows!” or sometimes “You’re a metronome today!” Mostly he runs quietly by my side or just ahead of me when things get tough. Unsurprisingly, High Power Running Mentor #1 talks a lot more when he shows up. He’s full of the advice he’s given me in person: “Eyes up!” “Steady! Hold that pace!” “Relax your shoulders!” and most often “Don’t be afraid of it!” I’ve had some local friends show up in my imagination too. Speedy Girl has given me form cues much more often in my head than in real life. During the last rep, I find myself racing Allegro Fuerte. Even when I might appear to be alone, I rarely lack for company.

Last week, I had a striking visit from Rose’s new friend, Jackson, age 8. Those two share a passion for playing make-belief with stuffed animals, making movies, and coming home with each other’s toys. She’s convinced him of the awesomeness of the TV show MASH and of the character Frank Burns in particular. Jackson visited me last week when I started to struggle during a set of 5 x 800m. The very best thing you can bring to the track is a positive attitude so I reminded myself to run with joy, no matter what. That’s when Jackson showed up. He’s is in third grade and about half my height, but there he was next to me, running, and laughing! Jackson laughs so much and so easily – he’s like a pure spark of elven joy. I finished the 800s with a smile on my face. I wish similar visits for you, dear reader.