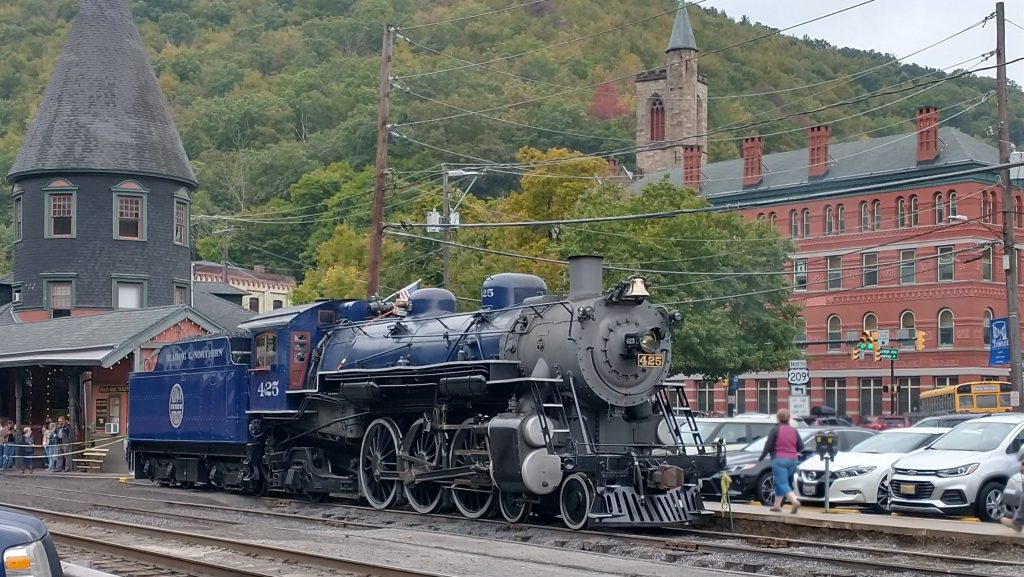 Life has been crazy since March. Not just my life. Literally, everyone’s lives. My original plans to run the Wineglass Marathon in October were dashed when the race was cancelled in mid-June because of the Covid-19 pandemic. By that time, it wasn’t a surprise since most races had been cancelled. By that time, we’d already been dealing with the pandemic for a few months and I had figured out that I was just going to keep training. I didn’t adjust anything when the race cancelled. The discipline of running imparts meaning to my life and that’s something we all need right now. I definitely wanted to keep training. What would I do about a race? Unclear. 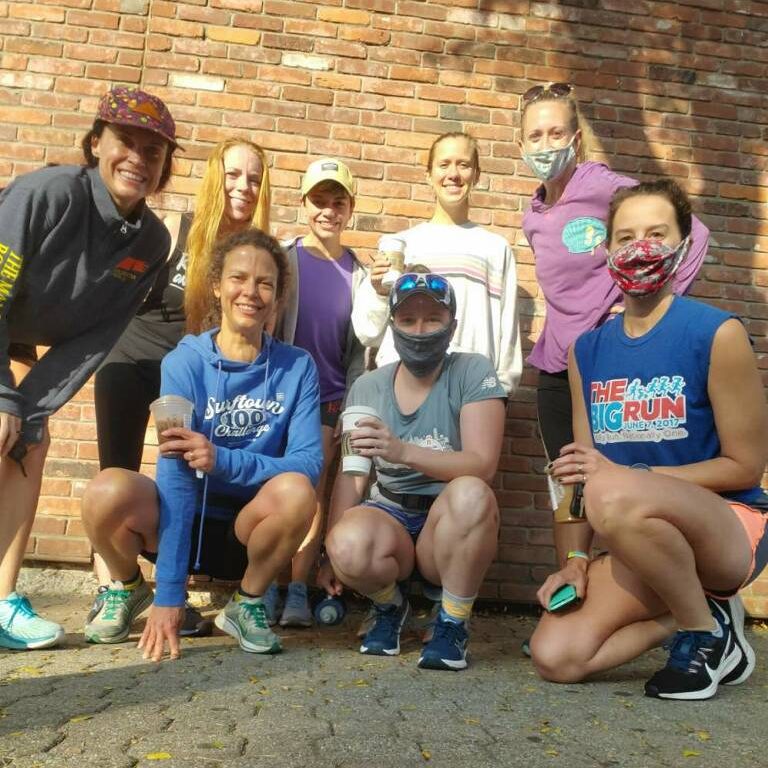 The day after Wineglass cancelled, the Badass Lady Gang sent me a link to the google spreadsheet they’d been compiling. The Badass Lady Gang is a group of women that found each other right as the pandemic started. We run together several times a week, grabbing coffee on Friday and brunch some Saturdays. They’d been collecting data on races that might take place, hence the spreadsheet. I registered for the Narragansett Marathon on October 25th and the Northern Ohio Marathon on November 1st.

Then I found the Facebook group “Finding Marathons and Other Races That Have Not Been Cancelled.” It turns out there was almost an underground world of very small races that were actually happening in person. Most of them were far away from New England, but the occurrence of races in other places gave me a lot of hope.

Ultimately it was a Sub-30 friend who tipped me off about the marathon at the Jim Thorpe Running Festival and I signed up for that as well. I ended up registering for three separate marathons in three different states over a five-week period, hedging my bets to find one that would actually happen and that quarantine rules would allow me to attend. Coach Mick and I took the advice of the Running Rogue podcast to heart and thought about training for a plateau rather than a peak.

Training went quite well with only a couple of hiccups. I reduced mileage a little bit for a trip to Michigan in late July to visit my family, but I got in some great runs while there. Then, less than 48 hours after we returned to Connecticut, Aidan had a bike accident and ended up in the hospital for four days. I never want to repeat that. Ever. Needless to say, training took a back seat. He’s fine now, thank God. In August I ran a hot 22 mile training run and it went fine. In September I ran 20 miles with the last 8 or so at marathon pace and it went really well. I ran over 70 miles a week, two weeks in a row – something I’ve never done before! In the 15 weeks preceding Jim Thorpe I ran about 100 miles more than the 15 weeks preceding Chicago. I certainly felt ready for a good race, but which race?

As the time approached to commit to a marathon, I was conflicted. Northern Ohio felt like too far of a drive and I wasn’t keen on being away from home for Halloween. Narragansett was close to home, but a more difficult course and the race directors didn’t have final approval for the race. The course at Jim Thorpe was better, but the earlier date meant a risk of warmer weather and the location, Jim Thorpe, PA, would require an overnight stay. Finally I realized that I was simply too nervous to head to Jim Thorpe alone, under the current circumstances. I felt like I should have been brave enough to do this, but I simply wasn’t. Instead, I asked the Incredible Mervus what he thought about the family coming along. Despite the Covid-craziness, he said yes, and that was a total game changer. With my crew by my side, I feel like I can do anything. Game on for Jim Thorpe! 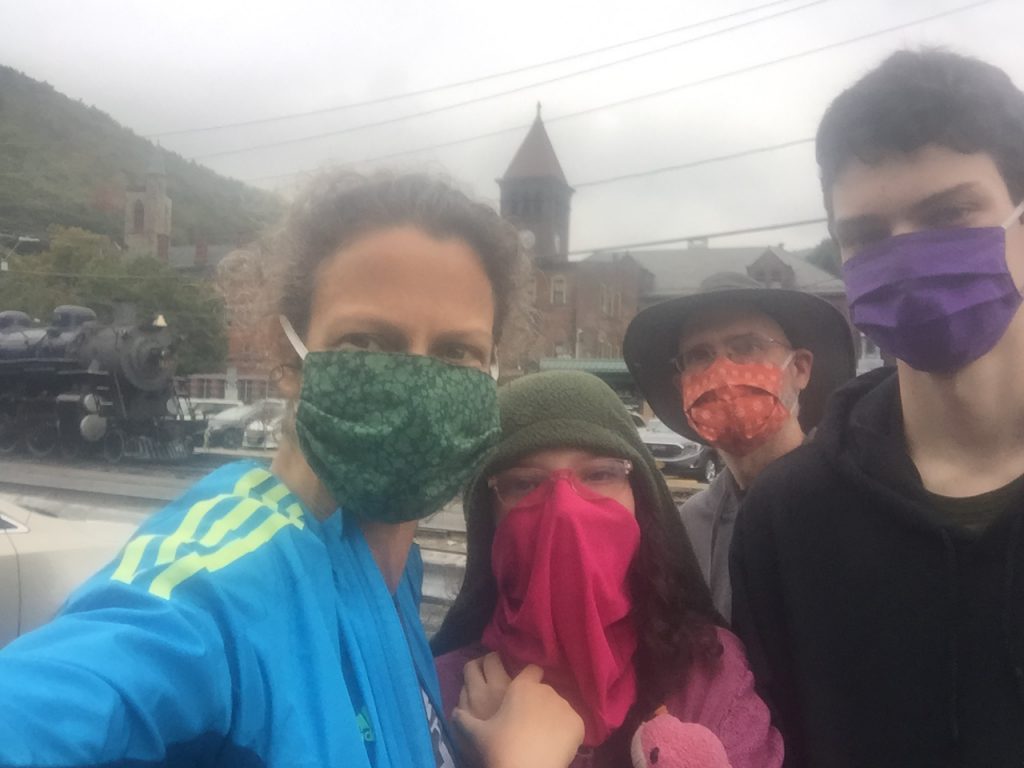 We got into town shortly before 1pm on Saturday and went straight to the parking lot for the train station, which was to serve as the parking lot for the race also. It was a zoo! So many people there – it was hard to find a spot to park. The race is really small, so who were all these people? The trail that runs from Jim Thorpe to White Haven is billed as one of the most beautiful in Pennsylvania, maybe the entire Northeast. It runs between the Lehigh River and the train tracks and between cyclists, train passengers, and hikers, the place was jammed. Yikes. 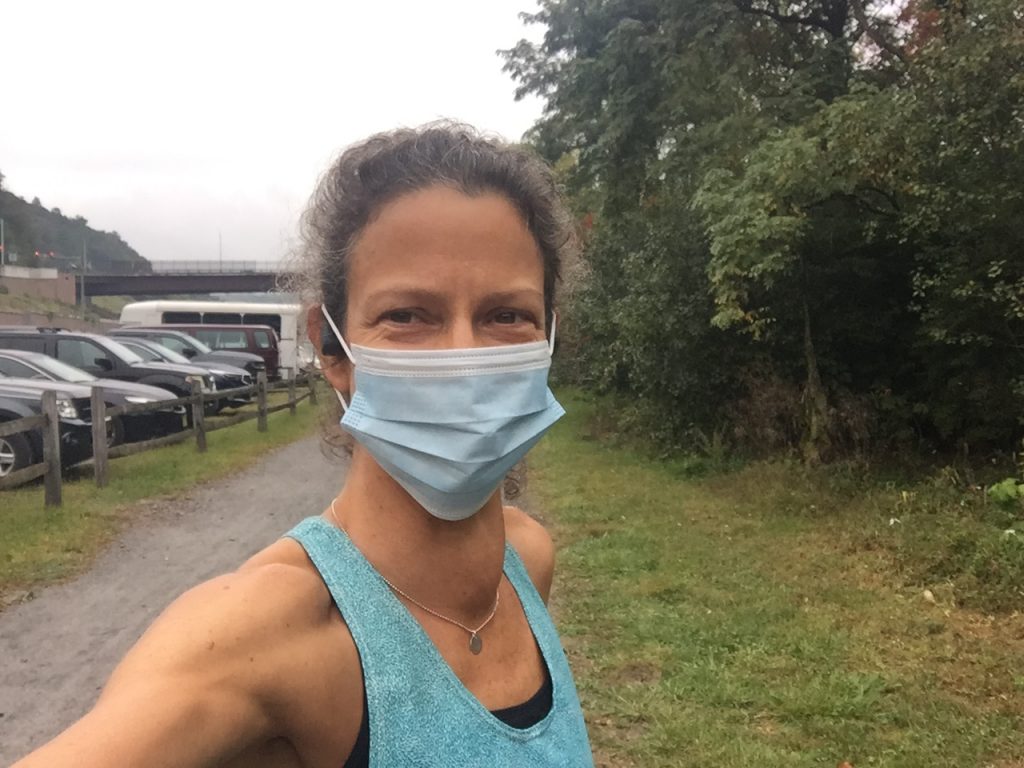 Getting ready for the shake-out run was a moment of significant doubt. It was drizzling a little. My family wanted to stay in the car, whereas I had thought they might poke around. I couldn’t tell where the trail started. It was so packed with people, uncomfortably crowded. I remembered the race I did in London – it felt like that, like I was very far out on a limb. Am I really doing this? Is this too much to go through just for the chance to race? I felt like a complete idiot. But I got out my Next%’s and put them on. I knew the trail was crushed gravel and I wanted to see how the shoes felt on that surface. I walked back to the little hut where they collect parking money and discovered the trail was in the opposite direction, so I turned around and walked back. I was wearing tiny shorts, a singlet, and my fancy shoes. My traditional track outfit, chosen to make me feel fast and powerful. Instead, right at this moment, I feel a bit like a space alien, dropped into the midst of hordes of cyclists, hikers and train passengers, all dressed for the cool fall rain. 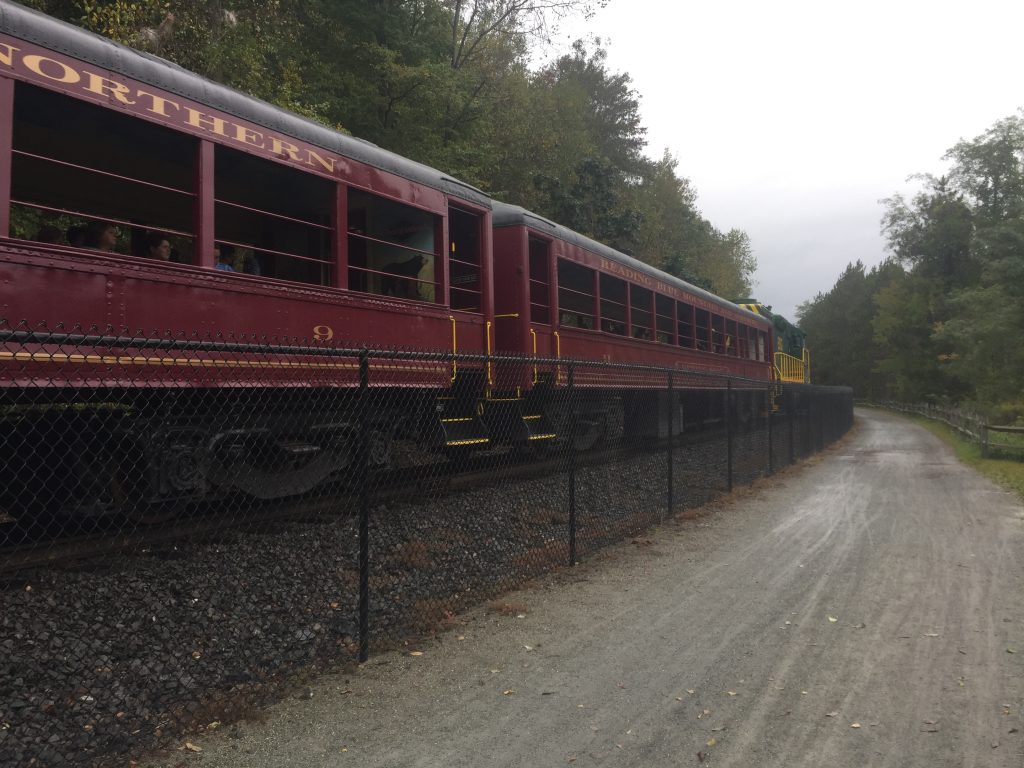 But when I got to the trail head, there were a couple of runnerly-looking people, and the woman was wearing a Boston 2019 jacket. I called out that I had a matching jacket in my car and were they here for the race? I had worn my Boston jacket to remind myself that I’m not an imposter because sometimes I still feel like one and this whole trip felt outlandish. She introduced herself and her husband, and yes, of course they were here for the race. I found their presence reassuring. It was nice to know I wasn’t the only crazy one. I warmed up and headed out on the trail. The surface was totally fine so that was good news. Running on the trail was a little muddy, but not terrible. Not at all bouncy, but forgiving and good to run on. As I was running north, I heard the train whistle and saw the train! I was delighted, taking that as a good sign!

After my shake-out run, we had planned to spend a couple of hours strolling around Jim Thorpe. The pictures I had seen online showed an adorable town with lots of cute stores and beautiful streets. This is perfect for my crew – Rose and I especially like walking about and doing a little shopping. The town was totally gorgeous and decked out for Halloween, but it was also really crowded and it was raining. We put up a brave front, but it was too chilly for ice cream. Too Covid-y for relaxed shopping. Too crowded and rainy for strolling. We finally threw in the towel to head back to the hotel. Before we did, we made one last stop. I had had the idea that Aidan could bike backwards on the course from the finish line to meet me. 26.2 miles is a long way to go alone and the way the trail is structured, there’s only a couple of access points. I also knew it might get warm and there weren’t going to be spectators or friends to pass out ice. Maybe some company and some ice would come in handy at the end. We rented a bike for Aidan for race morning. 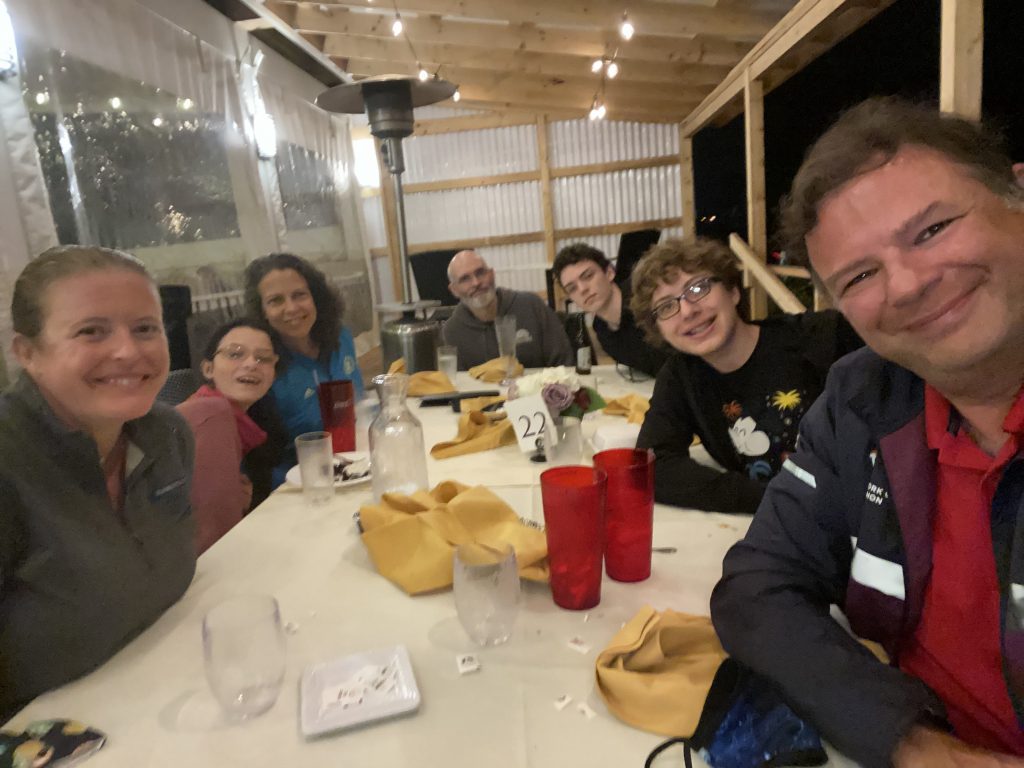 After checking in and getting settled at the hotel, we turned around and headed to Macaluso’s for dinner. We were meeting Team Sizzle! An actual Sub-30 meet-up! I have long admired Team Sizzle for their huge spirits, generous hearts, and incredible endurance and I was super psyched when it turned out they were also planning on Jim Thorpe. The whole team ran the half on Saturday and the grown-up Sizzles were in for the 8 miler on Sunday as well. Dinner was great. The food was really good. Rose hit it off right away with Mr. Sizzle, as I had predicted. We shared tales of races past and plans for races future. We compared notes on Star Wars and Star Trek. We sat outside in a tent and if there was a little traffic at first, that’s a small price to pay for dinner with some fabulous friends. The kids didn’t have to work too hard to convince us to stay for dessert. Back at the hotel, it was time for last minute race prep and bed as soon as possible. 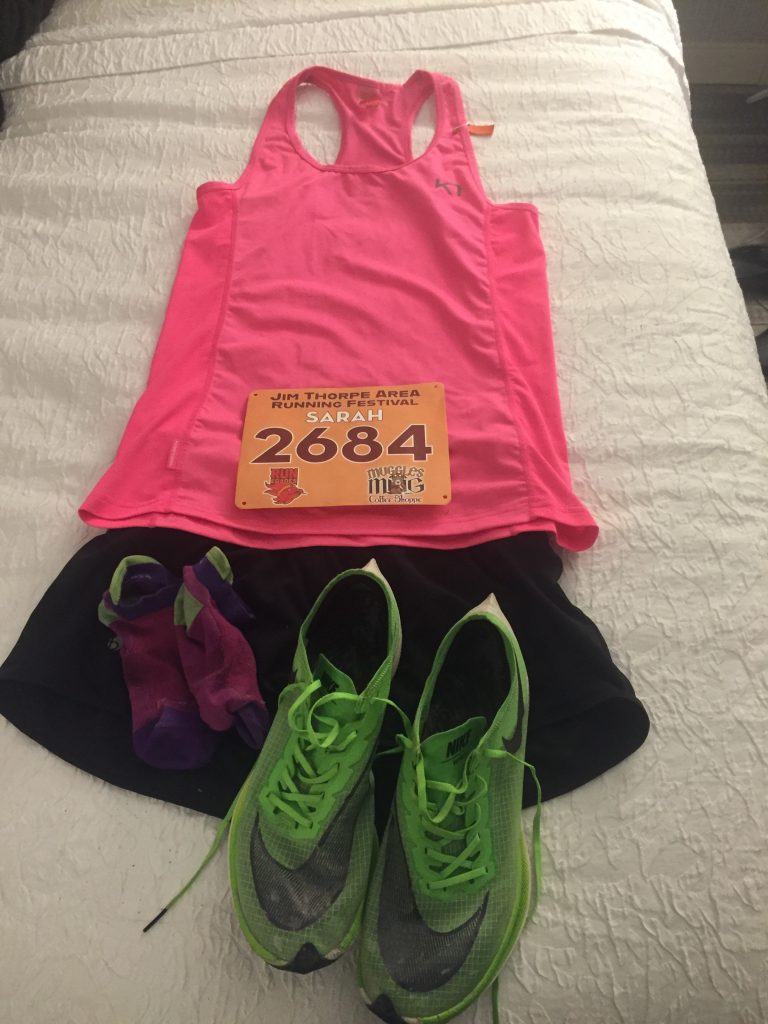