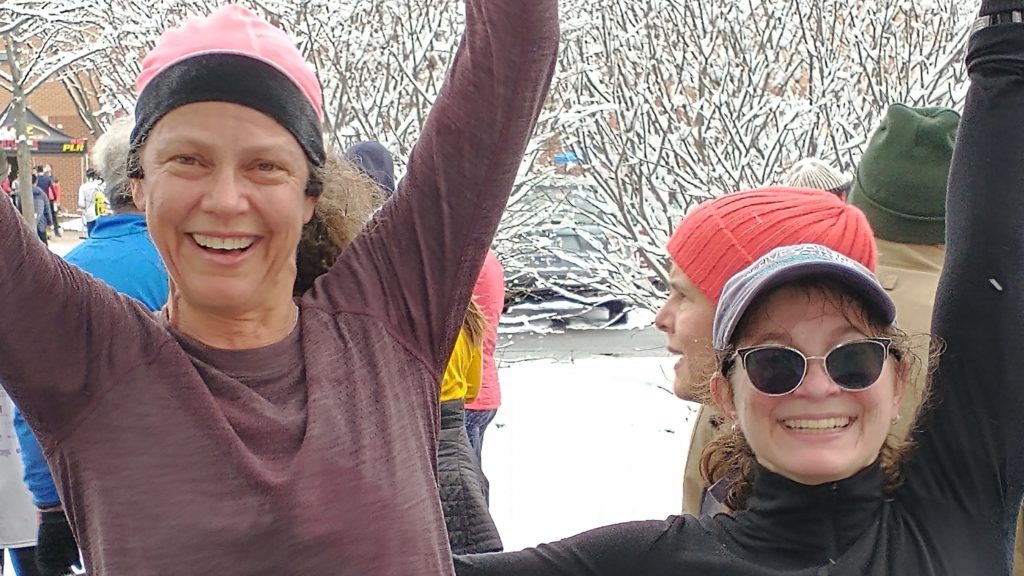 January was one hell of a month. Maybe I will just leave it at that. February is going a lot better so far!

Yesterday I ran the Run for Refugees 5K in New Haven. The race benefits IRIS (Integrated Refugee and Immigrant Services), an organization that helps settle refugees in Connecticut. When refugees arrive, they often have no money, no possessions, and don’t speak English. IRIS helps new arrivals with housing, basic needs, and employment. They help with language classes, getting kids into schools, and legal assistance. IRIS aims to assist refugees with becoming self-sufficient through integration into Connecticut’s local communities. The organization welcomes newcomers and celebrates the many ways they enrich life in our state. I love this organization and I love this race.

After a not-so-stellar 5K on January 1st (cheese, chocolate fondue and champagne are not great racing fuel – who knew?), I was eager for another shot, though also a little nervous. But I definitely didn’t want to miss this race, even when the weather turned snowy on race day. 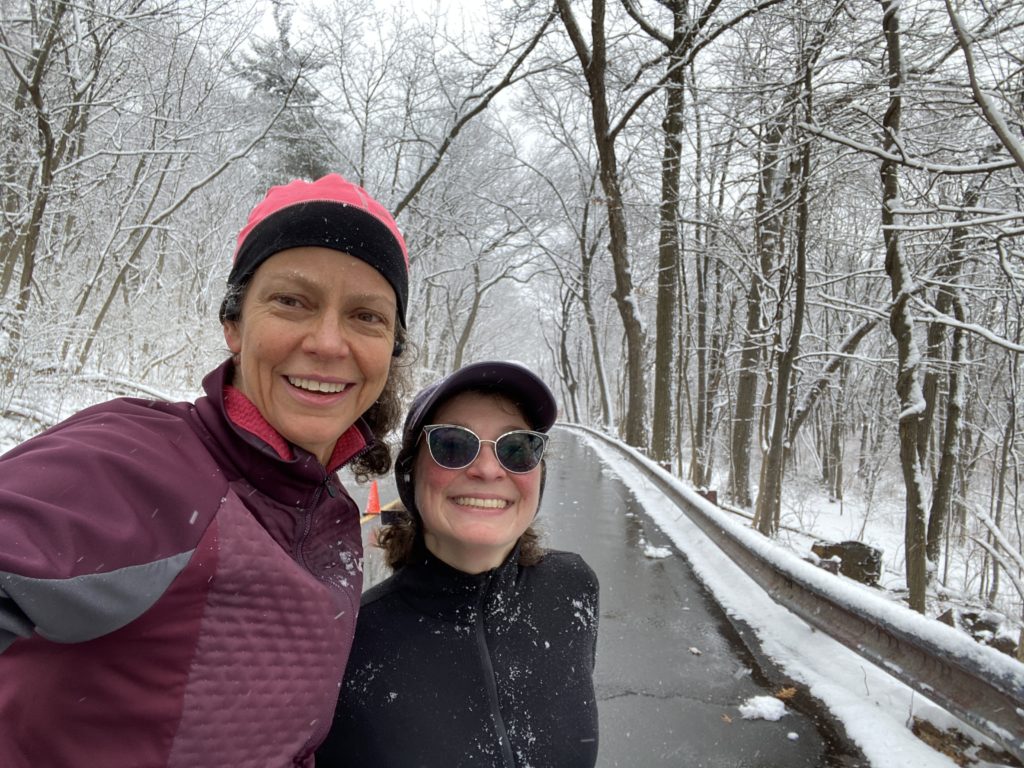 Mervus and Rose were able to come spectate for the first time since last summer. We were meeting Chewie there and she and I warmed up in snow globe conditions. The snow was beautiful, the road surface was clear enough, and the wind not terrible – it could certainly have been worse!

Run for Refugees has one of the best starts I’ve ever experienced. The folks from IRIS talk about how many families they’ve helped settle in Connecticut in the past year. The politicians speak (briefly!) about the importance of the organization. New Haven’s mayor even ran the race this year! Instead of the national anthem, they kick off with a poem about a refugee running to a safe haven. It’s the most racially and ethnically diverse starting line I’ve seen. One guy wore a shirt stating “Will Trade Racists for Refugees” – Love that! They rang the “Liberty Bell” and off we went!

I had planned to start at a 7:45 pace and see how I felt after a mile. That’s a slow 5K pace for me, but I haven’t been doing much faster running and it would at least be faster than the January 1st debacle. I straight-up swiped Chewie’s race mantra and broke the three miles into Strong Legs, Strong Mind, Strong Heart. Strong Legs and thinking about the good work I’ve been doing in the weight room got me through the first mile, which clicked off at 7:49. Mervus and Rose were waiting near the mile marker so I got great support from them!

The second mile is two long straight-aways. Strong Mind reminded me to stay focused. For this race, I looked at my watch and if my pace slipped more toward 8:00 minute miles, I sped up. I wasn’t able to go a lot faster, but the second mile came in at 7:41. Mervus and Rose were there again to cheer me on!

Mile three goes back around the park again. I was working hard, but it felt sort of like I was running with the brakes on. Hopefully that was the feeling of some of the rust coming off! I ran as hard as I could, thinking Strong Heart, don’t stop even though you so badly want to, it will be over soon!

I had told Chewie to imagine that her friend, Fast Tony, would be waiting for her at a yellow gate to chase her for the last kilometer. In reality, Fast Tony is back in Massachusetts, presumably enjoying Sunday brunch, but in my mind, when I got to the yellow gate, he was there waiting to chase me! He followed me all the way down the last stretch! Apparently he’s plenty fast enough to double back and also go after Chewie because she reported he was after her as well. Well, joke’s on you Fast Tony (or, maybe thanks for your services…), because I finished strong (last mile in 7:39) and Chewie ran a huge PR!

I ended up running more than two minutes faster at the Run for Refugees compared to the Colchester Resolution Run (26:09 versus 24:02). Non-idiotic fueling, some actual sleep the night before, and a few weeks of faster running definitely helped. But I’ve also been floundering a bit with my running for several months. I’m hoping that as we crawl our way slowly out of the pandemic, I’m starting to get back on track. One thing is clear – I did *not* forget how to execute the post-race brunch! 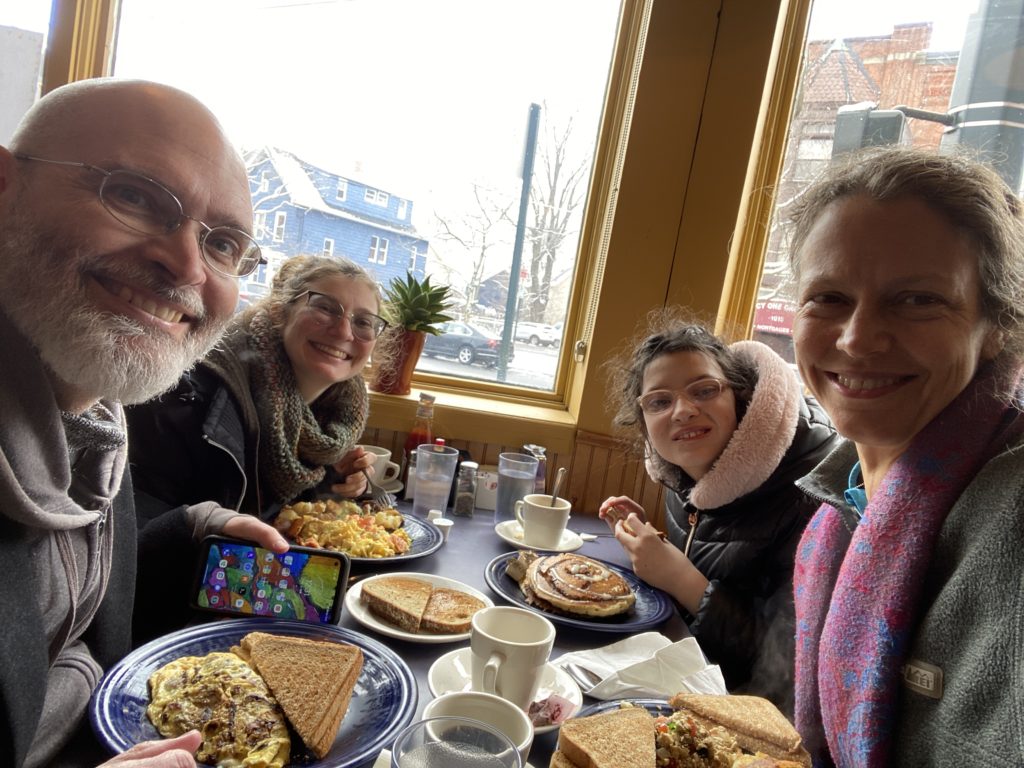